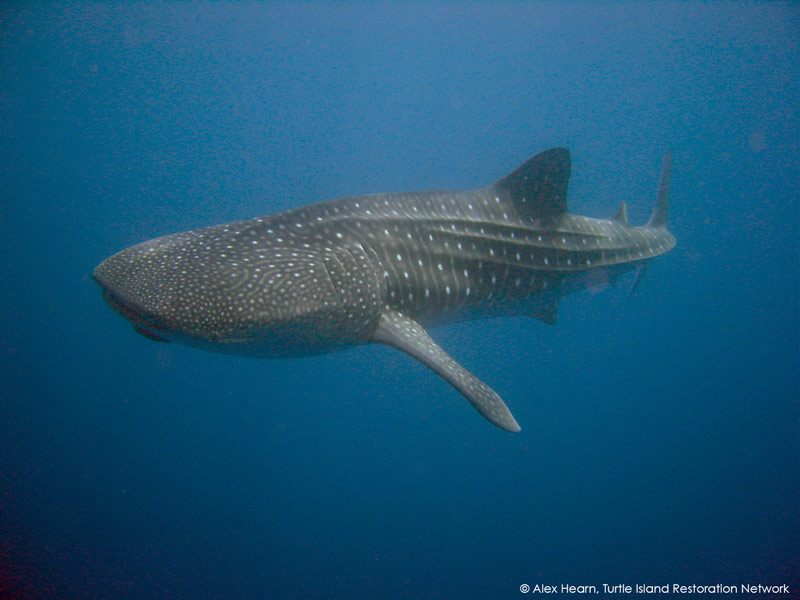 Cocos Island, Costa Rica. (Jan. 14, 2015)  — A new study in the Journal of PLOS ONE aims to unravel some of the mystery surrounding the largest fish in the sea – the whale shark. The study, led by collaborating scientist David Acuña of the Charles Darwin Foundation and co-authored by Alex Hearn of Turtle Island Restoration Network, discovered that more whale sharks than previously suspected use Darwin Island (one of the smallest islands in the Galapagos Archipelago) as a rest stop in their migration route.

Researchers discovered that an estimated 695 female whale sharks visit the Island each year. “This is truly an exciting discovery,” said Alex Hearn, director of conservation science at Turtle Island Restoration Network and co-author on the study. “Darwin Island is the only known place in the world where apparently pregnant whale sharks are regularly seen.  It’s a mystery why they are here, but we believe they may use the Island as a pit stop before moving into the open ocean to give birth.”

Almost all of the 180 whale sharks observed in the study were large, likely pregnant, females. Hearn and fellow scientists working theory is that these visiting whale sharks are using Darwin Island as a rest stop on the way to their birthing grounds in the open ocean.

This new research offers a glimpse of whale shark reproductive habits and movements in the Eastern Tropical Pacific, and is critically important to ensuring the long-term survival of these gentle giants who are slow to reproduce and face threats from by-catch and illegal fishing.  While they may be safe inside the Galapagos Marine Reserve, these pregnant females migrate through unprotected waters where they may become entangled in fishing nets. Although there are no longer any official targeted fisheries, whale sharks continue to be landed as by-catch in some areas. Last year, on the other side of the Pacific, in China, a single factory was found to be processing up to 600 whale sharks each year.

To date, almost nothing is known about their early life stages, and only a handful of young whale sharks have ever been reported in the world’s oceans. Forthcoming research will focus on the whale sharks migration routes once they leave Darwin Island.

Whale sharks (Rhincodon typus) are found worldwide in tropical and sub-tropical oceans.  They can reach up to 40-feet in length according to National Geographic. Whale sharks are filter feeders and eat plankton. Whale sharks can give birth to up 300 pups, 1.5 to 2 feet in length (Researchers in Taiwan performed a necropsy on a pregnant female whale shark and found 300 embryos).

Whale sharks are classified as “Vulnerable” by the International Union for the Conservation of Nature (IUCN) and their population is on the decline.  Relatively little is known about the habits, distribution and life history.  Turtle Island Restoration Network is working to study the movements and behaviors of whale sharks in the Eastern Tropical Pacific in order to better protect them with a science-based ‘swimway.’

Turtle Island Restoration Network is an international marine conservation organization headquartered in California whose 150,000+ members and online activists work to protect marine biodiversity in the United States and around the world. For 25 years, Turtle Island Restoration Network has mobilized people to preserve oceans, restore rivers and streams, and protect the marine wildlife – from sea turtles to sharks – that call these blue-green waters home. For more information, visit www.SeaTurtles.org.