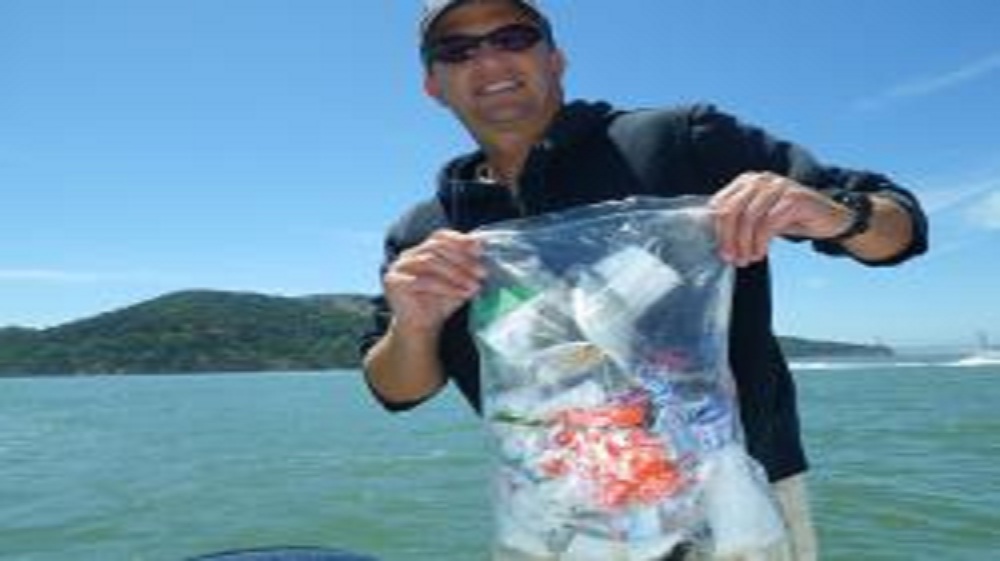 Sausalito, CA- A team of nonprofit scientists has begun using high-frequency radar to locate and clean up trash hot-spots on the waters of the San Francisco Bay.

Using a small boat launched from Sausalito, the team was able to locate two hot-spots of trash (or marine debris as it is called at sea) in just under an hour. Dip nets collected foam pieces, discarded rope, plastic bags, plastic cups, and dozens of other items.

“Over 90% of the recovered trash items were plastic, and 87% of those were disposable items people use once and litter or landfill,” said Chris Pincetich, Ph.D. marine biologist and leader of Marine Debris Action Teams, a project of SeaTurtles.org. “The plastic is polluting the critical habitat feeding area of leatherback sea turtles offshore of San Francisco Bay and may be harming them and other marine life.”

The teams’ ultimate goal is to prove that this technology could target the massive accumulation of plastic pollution in Pacific Ocean gyres.

The Pacific leatherback swims 6,000 miles across the ocean to feed on jellyfish along the California coast. More than 16,000 square miles of California’s coastal waters were designated as critical habit for the leatherbacks earlier this year.

“We were able go directly to high-density piles of plastic pollution using this high-resolution radar technology, just as we anticipated,” said Nick Drobac, Executive Director of The Clean Oceans Project. “I’m confident that this work in the San Francisco Bay will demonstrate that we can have equal success on the high seas tackling the massive amounts of plastic waste in the Pacific Ocean.”

“Less dense material like floating debris tend to be concentrated in convergence areas that can be monitored in real-time using high-frequency radar,” said Dr. Toby Garfield at San Francisco State University, who oversees parts of the network of radar along California’s coast. “We are very pleased that this data is being used to remove marine debris much more effectively.”

The Clean Oceans Project has been assembling technologies to launch offshore missions to address the growing epidemic of plastic pollution in the world’s oceans through a plan to efficiently locate it, collect it, and process it into diesel fuel using machines they possess. SeaTurtles.org works in California and around the world to protect endangered sea turtles and formed Marine Debris Action Teams in 2011 to stem the tide of plastic pollution in sea turtle feeding areas, through cleanups, scientific research, outreach and education. These two groups have developed a collaboration in San Francisco Bay where local volunteers can assist with cleanups before litter reaches the open ocean.

The radar used to locate litter hot-spots is part of the Coastal Ocean Currents Monitoring Program (COCMP) established in 2005 to measure coastal surface circulation along the whole California Coast. Nearly sixty radar stations along the coast provide live data on offshore currents to oceanographers, ocean rescue teams, and oil spill response teams. Most stations provide 1 or 3 km resolution but the system inside the San Francisco Bay offers 0.4 km spatial resolution of current movements in the central Bay. This high-resolution portion of network provided important current information during the response effort to the Cosco Busan oil spill of 2007.

“Studies determined that 37% of leatherback sea turtles have plastic inside of them, likely because they mistake floating plastic for jellyfish, their main prey,” said Dr. Pincetich. “Since most dead sea turtles are either eaten by sharks or sink, there could be far more dying offshore from plastic pollution than we know about.”