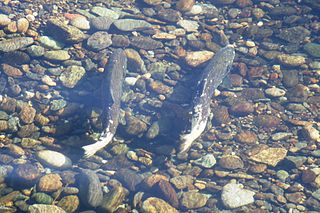 In spite of the heavy rains and swollen creeks this December, biologists are not seeing a rise in the number of salmon spawning in Marin County creeks.

Lagunitas Creek is currently seeing three times more water when compared to this time last year, but not three times the number of fish. Gregory Andrew, a fishery program manager for the Marin Municipal Water District, has been counting the number of salmon nesting sites — or redds.

Andrew said they would like to see 250 of the gravel beds, but the numbers are on track for just a little more than half that.

The water district has been tracking the population of salmon at Lagunitas Creek for decades and have seen wild swings from 1,300 fish down to just 50 six years ago.

“To say that they are stable now is sort of a stretch,” Andrew said of the fish population.

Visitors often come to late November to mid-January to see the fish.

“It sort of flashed on the side and it’s quite something to experience,” said Andris Peterson of Kensington.

Regulars said they have noticed a drop off in the fish population during the drought.