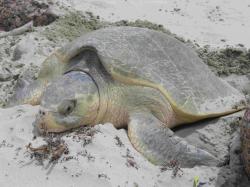 The Kemp’s ridley nesting season has begun all along the Texas coast. The first ridley nest in Mexico was found on March 30 and nestings usually begin in Texas two to three weeks later. The patrol teams along the Upper Texas Coast have started looking for telltale tracks indicating a sea turtle has left the water looking for a suitable place to lay eggs.

The US Fish and Wildlife Service has sent a detailed news release on what to do if a sea turtle is seen on the beach. The public is encouraged to immediately call 1-866-TURTLE-5. This toll-free number sponsored by the Sea Turtle Restoration Project is answered by federal and state agencies that will provide information or try to reach the site.

“The steady increase in the turtles’ nesting success is in large part due to the ongoing efforts by members of the public to protect them,” said Benjamin N. Tuggle, Ph.D., the Service’s Southwest Regional Director. “This is the kind of cooperative effort that will eventually lead to success in saving these sea turtles as well as other imperiled species.”

In addition, the public is asked to drive slowly and look out for sea turtles as they sometimes blend with the sand. If a camera is handy, photos are always welcome should the turtle finish the nest and returns to the water before a federal or state official arrives.

This year will be different for all those who patrol the beaches or follow the news about the Kemp’s ridleys. Many of those that laid eggs on the Texas coast last spring migrated to the east only to find water covered with oil, beaches ruined by sludge and perhaps contaminated food such as shrimp and crabs. Between April 20 and July 15, millions of gallons of oil poured from the BP well followed by over flights dropping dispersants that might also be deadly.

What will be the effect on Kemp’s ridley sea turtles that nested in Texas? One such turtle is named Kathy and was discovered on May 19 last year at Surfside Beach, west of Galveston. She left 102 eggs which were excavated by biologists from Texas A&M University at Galveston and moved to the Padre Island National Seashore for incubation. The movement of the eggs is necessary because there is no incubation facility or corral in Galveston.

Kathy was outfitted with a satellite transmitter as part of a study assessing the impact of Hurricane Ike on sea turtle nesting activity on the upper Texas coast. She was released at Stewart Beach on Galveston Island on the same day. Kathy has been named in honor of Katherine McGovern, President of the John P. McGovern Foundation, who donated funds enabling the 2010 nesting patrols.

But, will we see Kathy again? Maybe so. On April 4, her satellite transmitter indicated she was near southeast Louisiana, hopefully on her way back to Surfside to leave another nest of eggs.

Another 2010 Kemp’s ridley nester named Karen was tracked to waters west of Florida but her transmitter is no longer sending a signal. She had migrated along the Gulf Coast when the BP well was spewing our millions of gallons of oil, maybe into her path. We hope the lack of a signal from Karen’s transmitter is because it simply quit working but we won’t know unless she returns to the Texas coast. She was named for the late Karen Stockton who educated thousands in the Houston area through her songs about sea turtles and nature. It’s sea turtle nesting time again, but this year, let’s watch for Kathy and hope for Karen to return to the Upper Texas Coast.