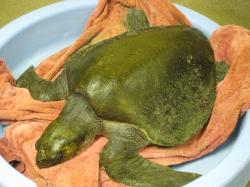 “This is definitely a rare find, one of only three live olive ridley turtles I know of reported in the scientific literature since 2001 along the Central California coast,” said Todd Steiner, biologist and Executive Director of the Sea Turtle Restoration Project, based in Marin County, California.
The sub-adult female turtle weighed approximately 60 lbs and its carapace (top shell) measured about two feet.  It was lethargic and cold-stunned when located and was initially transported to the Marine Mammal Center in the Marin Headlands where it was stabilized with fluids, vitamins, and precautionary antibiotics, and then onto SeaWorld in San Diego for further rehabilitation, where it currently remains in guarded condition. The turtle appeared malnourished and had algae, barnacles, crabs and shrimp attached, suggesting it had been floating for some time.

“The nearest nesting beach for olive ridley turtles is Mexico and this turtle was probably sick or injured and may have been floating around for weeks or even months,” Steiner said.  Though Steiner doubted global warming was responsible for the sighting, he noted that climate change is likely to lead to more and more unusual sightings of wildlife, displaced from their normal range.

“Climate change is a triple-whammy for sea turtles due to their unusual life history traits that include temperature-dependant sex determination, rising seas that submerge natal nesting beaches, and expected changes to ocean currents that will impact their long migrations,” Steiner commented.

The other live olive ridley sightings include a captured by a salmon fisher 1/2 mile west of Muir Point off the Marin County coast On October 10, 2001 by salmon fishers and a turtle on Shell Beach in Tomales Bay, south of the town of Inverness, on November 28, 2002, that appeared healthy, and returned to the water on its own. (The previously mentioned sightings were reported in a scientific note published by Steiner and Walder available here http://www.seaturtle.org/mtn/archives/mtn107/mtn107p9.shtml