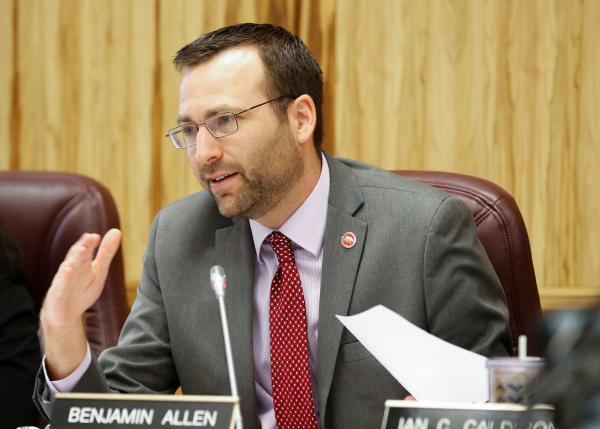 “Senator Allen works to protect marine wildlife from the dangers of deadly California driftnets,” said Cassie Burdyshaw, Advocacy and Policy Director for Turtle Island Restoration Network, the Marin-based non-profit that nominated Sen. Allen. “His leadership and concern for California’s sea turtles, whales, dolphins, shark and wildlife is commendable, and we believe he is a true champion of change,” she added.

Earlier this year Sen. Allen authored legislation to protect California’s marine wildlife by phasing out the use of deadly driftnets off our California coast. These giant nets are a mile long, and are set out to catch swordfish and thresher shark. Unfortunately, this outdated method of fishing also kills, harms and entangles precious California wildlife from endangered leatherback sea turtles to sperm whales. The fishery consists of fewer than 20 boats and has injured or killed nearly 1,000 marine mammals over a ten year period. This wasteful industry discards two out of every three animals it catches, many of those dead or dying. This includes a variety of endangered animals like sea turtles and sperm whales.

Californians concerned with this practice should know that Sen. Allen is working to end California driftnets, the most harmful fishing practice on the West Coast by transitioning California’s swordfish industry away from driftnets to more sustainable fishing technology.

“We have a moral imperative to protect whales, dolphins, sea turtles, and other marine life from senseless injury and death in harmful drift gillnets.  It’s time for the swordfish industry to transition to a proven, safer alternative,” said Sen. Allen. His legislation laid out a transition plan to phase out the use of these mile-long nets to a new, more environmentally responsible fishing method using deep-set buoy gear.

The legislation would have authorized the use of this more sustainable technology while at the same time phasing out the use of drift gillnets by existing permit holders, and prohibiting the issuance of any new permits for use of gillnets. Current driftnet fisherman with permits would be given incentives to become earlier adopters of the new fishing gear. Despite the bill’s failure to be passed into law this year, Sen. Allen remains committed to addressing this outdated and deadly fishery.