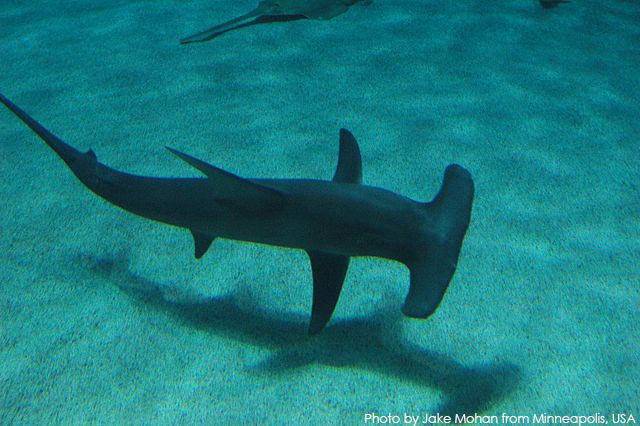 Turtle Island Restoration Network is sponsoring graduate student Elena Nalesso an effort to better understand the endangered scalloped hammerhead sharks of the Cocos Islands. Elena’s recently published thesis examines the behavior of these sharks at the remote island, which is located off the coast of Costa Rica and northeast of the Galapagos Islands.

To study the sharks, over the past decade, dive teams from Turtle Island and sister organization PRETOMA placed special high-tech acoustic telemetry tags on more than 80 scalloped hammerheads, most of which were female. These tags then ‘pinged’ each time the tagged shark swam within the range of the six receivers placed around the island. In this way, Elena was able to gather information about the behavior and habits of the scalloped hammerhead sharks at the island.

She learned that one of the tagged sharks moved between islands (it swam from Cocos to the Galapagos) and that the sharks tended to hang around the island during the day and leave at nightfall. Five other sharks tagged by collaborators in Galapagos were later detected at Cocos, along with another four from Malpelo (an island 400 km off the coast of Colombia). These findings indicate that the sharks do spend a lot of time in the flora and fauna rich waters around the islands, but that their range extends far beyond the limits of the Marine Protected Area.

Her research points to the need for greater protections for these endangered sharks when they leave the haven of the protected area at night or en route to another island. Scalloped hammerheads swimming outside of the protected zone are especially vulnerable to longliners, which generally set their lines at dusk and recover them before dawn. The sharks are also unable to recover from an encounter with a longline due to the unique way they breathe (they are obligate ram ventilators, and are therefore susceptible to suffocation if unable to swim forward and aerate their gills when caught on a line).

Elena’s thesis adds to an existing body of research that looks at both where these sharks swim, and how protected they are in the Eastern Tropical Pacific. Her works also makes a strong case for the creation of protected swimways that safeguard the migrating sharks when they leave a Marine Protected Area. Turtle Island Restoration Network will be working tirelessly to create a protected swimway in the region that protected migrating sharks and sea turtles.