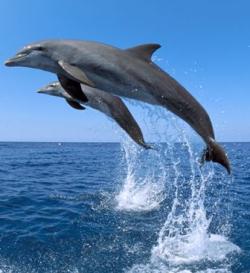 Nearly Half of Seafood Consumed in U.S. Not Certified to Meet U.S. Requirements

NEW YORK (July 2, 2014) — Each year, nearly half of the more than 5 billion pounds of seafood consumed by Americans — including tuna, swordfish, shrimp, cod and other fish — comes from foreign fisheries that have not been shown as meeting U.S. whale and dolphin protection standards. The United States is required to insist on such proof before foreign seafood may lawfully be imported into the United States. A lawsuit filed today by Turtle Island Restoration Network and conservation groups seeks to protect marine mammals by requiring the government to ensure that all imported, wild-caught fish meet U.S. standards.

“The U.S. can — and by law, must — wield its tremendous purchasing power to save dolphins and whales from foreign nets,” said Todd Steiner, biologist and executive director of Turtle Island Restoration Network. “We have the right to ensure that the seafood sold in the US is caught in ways that minimize the death and injury of marine mammals.”

Across the globe, more than 650,000 whales, dolphins and other marine mammals are killed each year in fishing gear. Ensnared in nets, wrapped in fishing lines or snagged on fishing hooks, they become unintentional bycatch of commercial fisheries and either drown or are tossed overboard to die.

The United States is the second largest importer of seafood in the world, behind Japan, importing approximately 90 percent of its seafood, about half of which is wild-caught.

Under U.S. fishery regulations, U.S. fishers have been required to modify their fishing gear, avoid marine mammal hot-spots or take other measures to limit the risk of entanglement. Yet many foreign commercial fishing fleets continue to offer few if any safeguards for marine mammals or even document how many endangered animals are caught.

Since 1972 the United States has been required by the Marine Mammal Protection Act to only allow the importation of fish or fish products caught in a manner that meets U.S. standards for protecting marine mammals. Although the United States has enforced the provision for yellowfin tuna in the eastern tropical Pacific Ocean, it has ignored the law for all other fish, allowing imports without proof that U.S. standards have been met. Today’s lawsuit seeks to compel the U.S. to issue much-delayed regulations implementing this critical provision of law.

“Americans would be appalled if they knew their Friday-night fish dinner might be killing imperiled whales and dolphins around the world,” said Sarah Uhlemann, senior attorney and international program director of the Center for Biological Diversity. “It’s time to make all seafood ‘dolphin-safe.’”

Fishing gear poses a significant risk to marine mammals worldwide and threatens the very existence of some of the planet’s most charismatic species. These animals include the Gulf of California’s critically imperiled vaquita, the endangered North Atlantic right whale, spinner dolphins in the Indian Ocean, sperm whales in the Mediterranean, and false killer whales off Hawaii.

“It’s time for the government to act,” said Zak Smith with the Natural Resources Defense Council. “When this important provision of law is implemented it will help save thousands of whales and dolphins around the world.”

Today’s lawsuit was filed by the Center for Biological Diversity, Turtle Island Restoration Network and the Natural Resources Defense Council in the U.S. Court of International Trade in New York.

The Center for Biological Diversity is a national, nonprofit conservation organization with more than 775,000 members and online activists dedicated to the protection of endangered species and wild places.
www.biologicaldiveristy.org

The Natural Resources Defense Council (NRDC) is an international nonprofit environmental organization with more than 1.4 million members and online activists. Since 1970, our lawyers, scientists, and other environmental specialists have worked to protect the world’s natural resources, public health, and the environment. NRDC has offices in New York City, Washington, D.C., Los Angeles, San Francisco, Chicago, Bozeman, Montana, and Beijing.Visit us at www.nrdc.org and follow us on Twitter @NRDC.