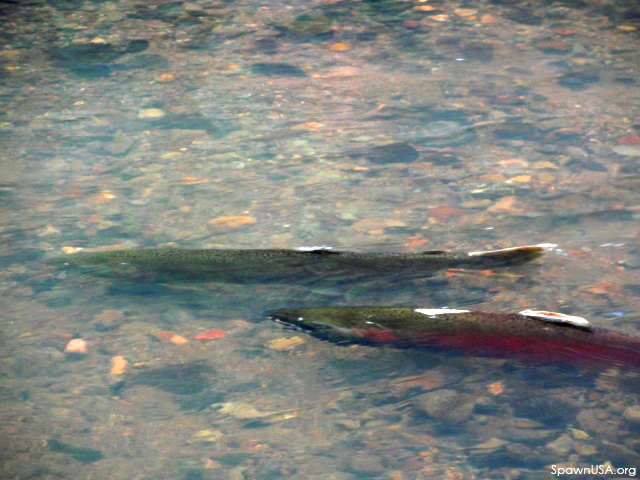 Marin County Civic Center (August 10, 2011)–Today Superior Court Judge Lynn Duryee ruled that a handful of landowners, cannot hijack SPAWN’s lawsuit to protect coho salmon by having the case thrown out of court. The landowners intervened into the suit solely to prevent the court from hearing the merits ofSPAWN’s California Environmental Quality Act (CEQA) claims. Even the County agreed with SPAWN that the court should hear and resolve the lawsuit.

The landowners have been dismissed from the case.

At the County’s request, SPAWN entered into a series of valid agreements with the County to toll the applicable statute of limitations on SPAWN’s CEQA claims in an attempt to avoid litigation and give the County time to further study the plight of the critically endangered salmon and correct its failure to follow California environmental law. Such “tolling agreements” are routinely used to delay immediate litigation and enable parties to negotiate possible resolution of conflicts without litigation.

Contravening a century of state law, the intervening landowners argued that such tolling agreements should not be honored by the courts. Their argument would have prevented local governments from engaging in meaningful pre-litigation settlement efforts and, instead, would force virtually every land use dispute immediately into court.

In rejecting the intervenors’ argument, the court concluded that “The parties entered into a valid tolling agreement . . . CEQA encourages parties to avoid litigation through pretrial settlements and negotiated dispositions, which may include the use of tolling agreements. Accordingly, the action is not time-barred.”

“Unfortunately, the intervenors tried to turn the goodwill SPAWN offered to the County to resolve this legal issue out-of-court, as a weapon against SPAWN and the salmon,” said Deborah A. Sivas, Luke W. Cole Professor of Environmental Law and Director of the Stanford Environmental Law Clinic at Stanford Law School, who is representing SPAWN pro bono. “The court properly rejected their ill-conceived arguments.”

“SPAWN is right on the science and right on the law and it’s a shame that the Stewards are engaged in a self-serving campaign that is damaging the chances of recovery for our endangered salmon, pushing them one step closer to extinction” said Todd Steiner, biologist and executive director of SPAWN. “Ironically, the Valley Stewards have attacked SPAWN over the cost of litigation, yet their frivolous motion has forced the County to pay its outside legal Council thousands of additional dollars to address this motion twice, first in writing and then again in oral arguments.”

Background:
In its efforts to protect critically endangered salmon and to safeguard the quality of life for all Marin County residents, the Salmon Protection And Watershed Network (SPAWN) filed suit against Marin County to compel compliance with State and Federal Law.

For at least three years, the County has been in violation of CEQA. In 2007, County Supervisors adopted the Marin County Wide General Plan Update without conducting adequate environmental review or adopting supportable findings, as required by CEQA. In so doing, the County also issued a “finding of no significant impact” from future real estate development on steelhead and salmon in the San Geronimo watershed. The County’s own legal record, however, contradicts this assertion. In its 2007 finding of significant and unavoidable impacts to coho and steelhead habitat and movement, the County plainly established and acknowledged the grave threat to these species. Because the County has violated California Law, SPAWN has initiated this corrective legal action.

Deborah A. Sivas, Luke W. Cole Professor of Environmental Law and Director of the Stanford Environmental Law Clinic at Stanford Law School said, “The very purpose of CEQA is to require that agencies meaningfully evaluate the cumulative impacts of their actions and possible ways to mitigate those impacts before making any decision. Here, we have critically imperiled wildlife species on the brink of extinction and yet the County approved a plan for future development without properly assessing impacts on these species. Negotiations have apparently failed to correct this legal error by the County, and it is now time to let the Courts arbitrate the issue.” She continued, “SPAWN’s concern has always been with the County’s failure to follow state environmental law, and that’s what we are trying to remedy through the courts. This case is not aimed at any individual or the San Geronimo Valley community.”

Michael Graf, attorney and co-counsel stated, “Even after granting the County almost three additional years, the County failed to conduct the necessary review and now they say any such analysis is years away.  This raises an issue of how the County can in the meantime continue to approve development in the stream zone when they have no idea where the cumulative tipping point is for the coho.”

In 2007, SPAWN informed the County that its environmental analysis of the coho, now on the brink of extinction, was “inadequate, ill-informed and illegal” according to Steiner. County attorneys appeared to agree. Supervisor Kinsey architected a plan in which the county would hire independent scientists to and make recommendations to the County, while placing a moratorium on issuing building permits for new development along sensitive stream areas in the San Geronimo Valley, the strongest vestige of remaining salmon spawning and rearing areas. During those two years, SPAWN sought to collaborate in good faith with the County to develop an eco-system wide plan intended to enhance the chance of survival for endangered coho salmon. However, the county failed to undertake even the most basic restorative activities, such as promulgating a new vegetative management ordinance to preserve creekside habitat and protect hatchlings and juvenile fish.

In the past three years, the local coho population has plummeted. California Fish & Game has inaugurated a series of emergency meetings to forestall species extinction. Meanwhile, California’s leading scientists have once again called on Marin Supervisors to act swiftly and forcefully to protect salmon creekside habitat.

“Scientists, legal scholars and the conservation community has waited patiently for the County to act, but the Supervisors have failed to take meaningful actions that would protect the endangered fish, protect the public trust, and correct their illegal inadequacies of their environmental analysis,” said Steiner.