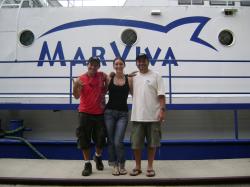 recently returned from a trip to Cocos Island, tagging sharks.  Since 2005, PRETOMA and TIRN have been tagging sharks in Cocos Island with acoustic telemetry.  This type of tag is attached to sharks by shooting a dart with a tether into the flesh under the dorsal fin, by means of a spear gun.  However, during our last expedition, accompanied by researchers from Colombia (Sandra Bessudo and German Soler) and Ecuador (Alex Hearn) we also attached a satellite tag to a silky shark.  I want to share this picture with you, because in order to satellite tag a shark, we actually need to catch it, deck it, drill holes in the dorsal fin and attach the transmitter.  PRETOMA did this type of work in 2005, assisting researchers from the Southwest Fisheries Science Center NOAA, but this is the first time we are actually doing it as main researchers. During our next expedition in March 2009, we will be doing more of both tagging methods on sharks, and we will be satellite tracking green turtles too.  And guess what?  You can actually join us!  You can either pay the full rate of going to Cocos Island and doing up to 4 dives a day for 7 days in one of the most fascinating shark sites, for slightly less than $5K, or you can purchase a raffle ticket for $100, and hey maybe you are lucky!