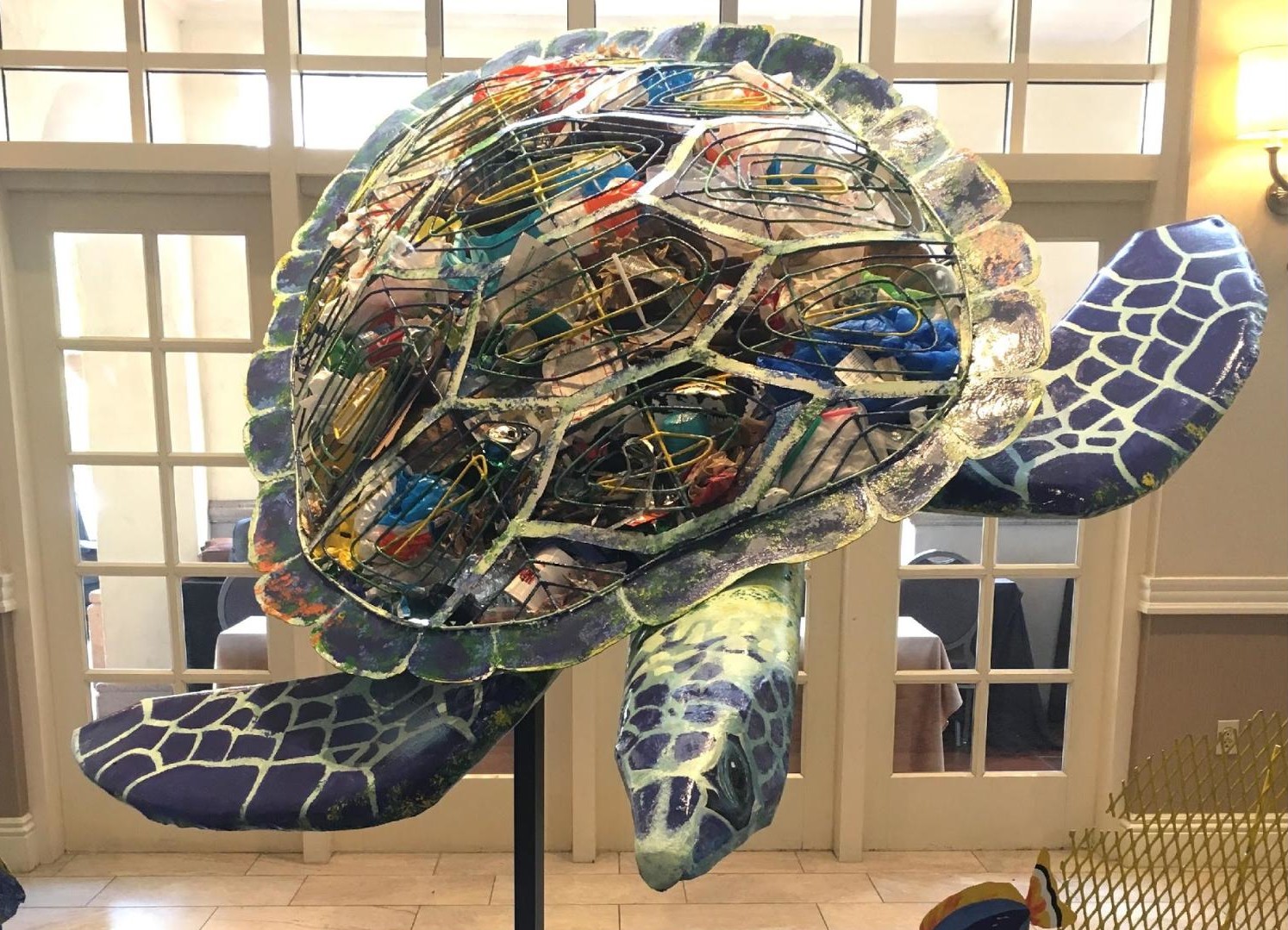 You can’t study turtles without being affected by trash.

This March, I attended the 2018 Sixth International Marine Debris Conference in San Diego, an awesome forum for science, inspiration, unity, community-based solutions, creativity, action, and technological ingenuity.  As depressing as it was to see the images of trash all over our planet, connecting with people who are making a difference worldwide was encouraging. 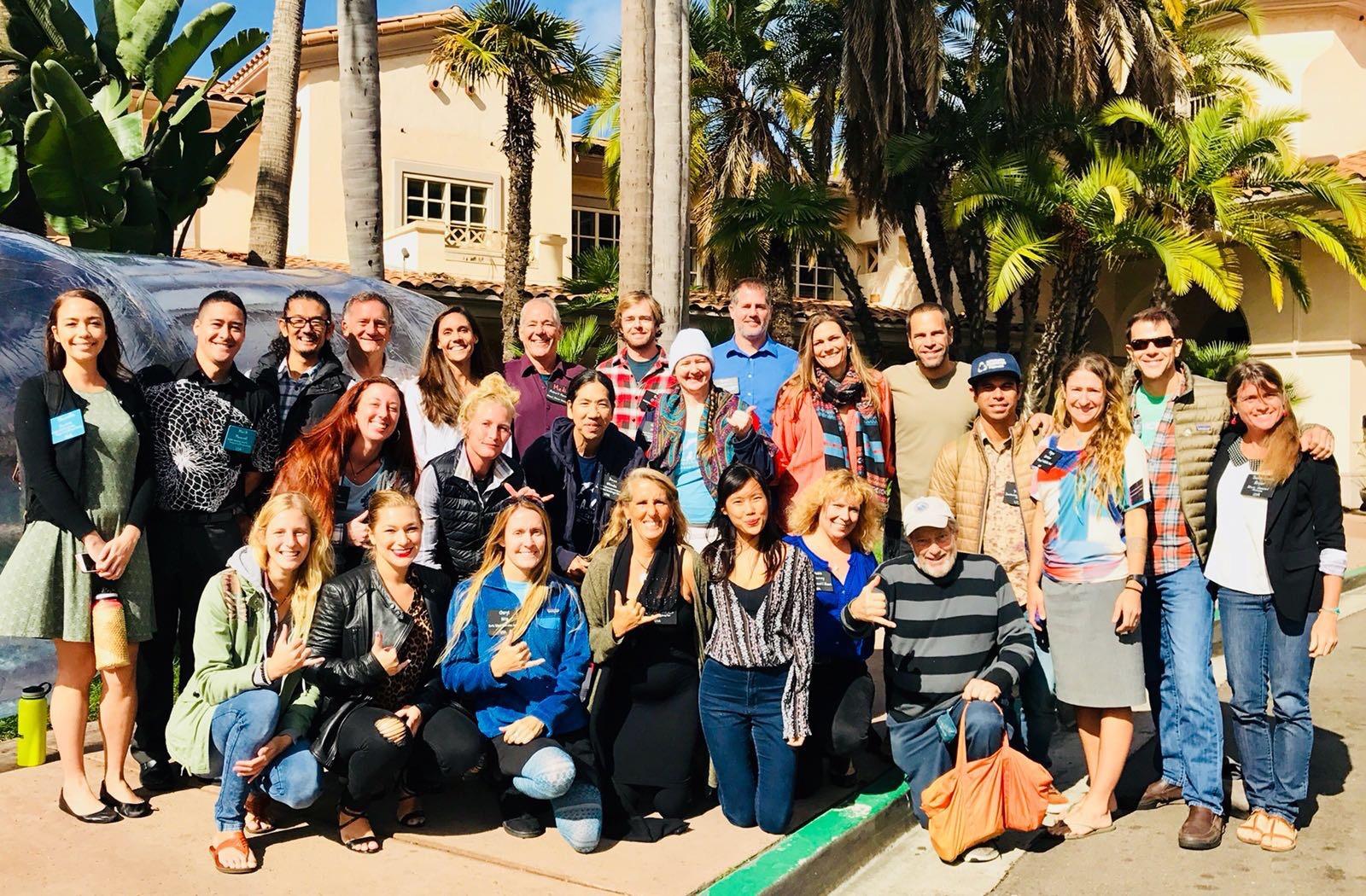 Pictured above are most of our colleagues from Hawai`i who attended.  I’m proud to be working towards solutions with them, with aloha!

Growing up, we all learned that littering was wrong…  As adults, “no littering” signs remind us, so there’s really no excuse.  And with the help of social media, the word is spreading about how there are more than just “3 Rs”: Refuse, Reduce, Reuse, Repurpose, and then Recycle! 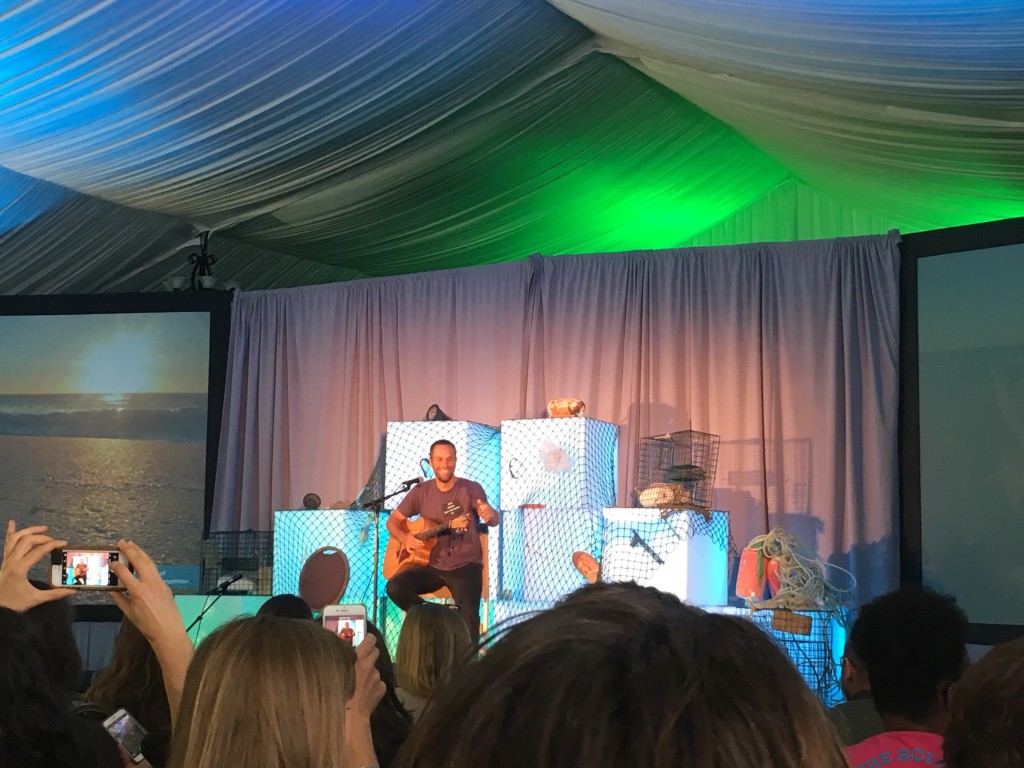 Jack Johnson, the leading artist in the go-green, anti-plastic movement, has been practicing what he sings for over a decade (and his performances have been the highlights of both of the closing days at the past two International Marine Debris Conferences). His musical role is to help people fall in love with the ocean, so then they’ll in turn care for it… His Kokua Foundation’s  role is to reduce plastic pollution in schools and to educate and inspire youth to become stewards of the earth.

These and similar global efforts have to be helping, right?

So, how is it possible that so much trash litters our lives today? This trash never really goes “away” since it’s designed to stick around for a lot longer than we need or want it to.  Most of it will outlive us by far!

And, how does so much of it make its way into our oceans?  It was already an issue long before the disastrous 2011 Tohoku tsunami that washed an estimated 4 million metric tons of debris into the ocean, much of which sank offshore of Japan.  This tragedy truly raised awareness of this problem to the now household term, “marine debris”. Comparatively in significance, Captain Charles Moore “found” the Great Pacific Garbage Patch while he was sailing between Hawai`i and the Mainland U.S. 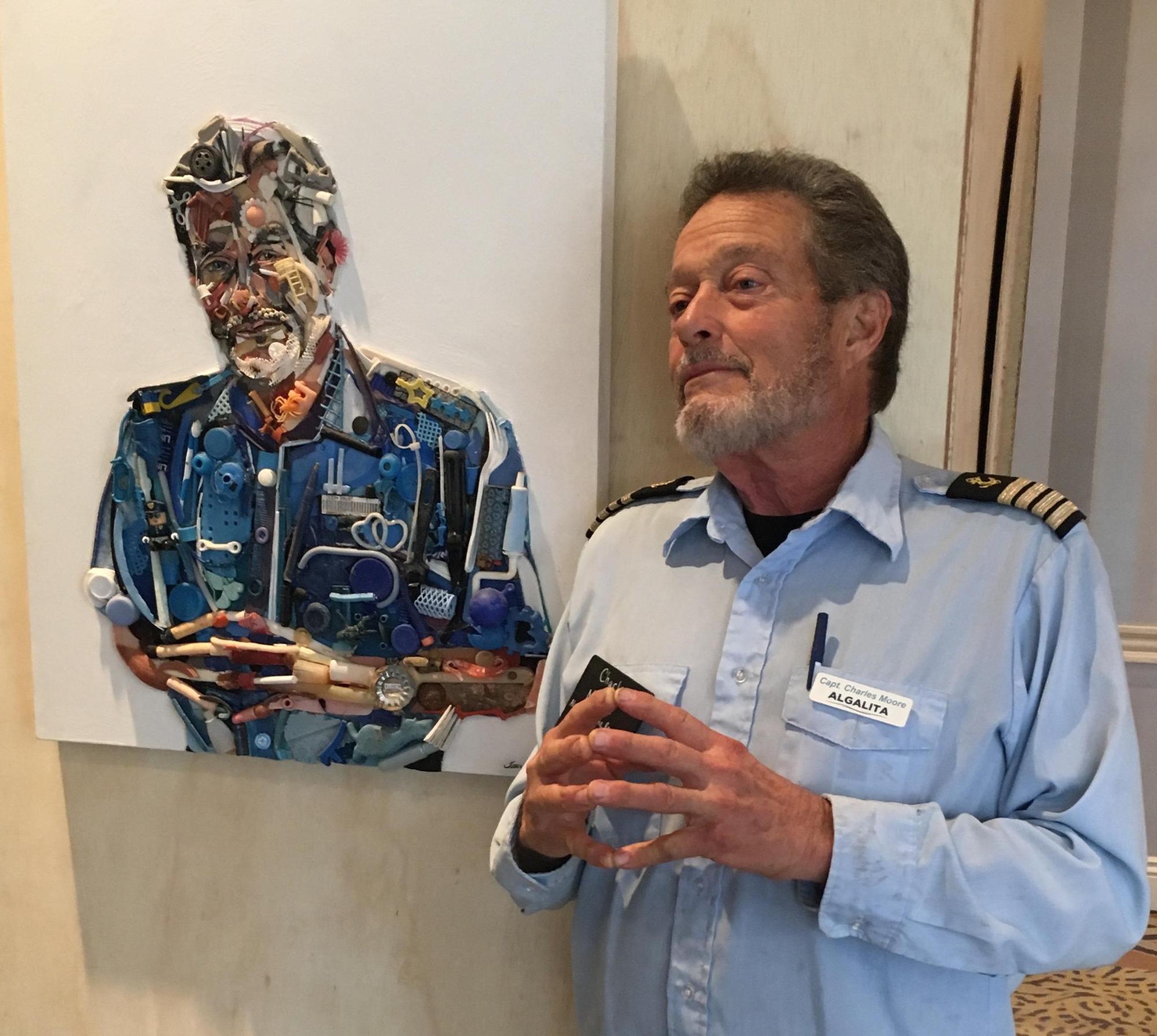 Above, Captain Charles Moore who has made it his life’s work to spread the word about it and the other ocean gyres where plastic and other trash are rivaling the amount of natural organisms inhabiting them (http://www.algalita.org).

Marine debris, also known as “ocean trash”, “plastic pollution”, “ocean pollution”, etc., is a global problem that’s not going to be solved anytime soon.  There are solutions of course and it’s actually rather straightforward: stop making it and stop littering it. Why can’t such an intelligent race of humans do those two simple steps?

The convenience of our throw-away, single-use consumer-crazed society is affecting the health of our land, oceans and other waterways. The majority of the world doesn’t have adequate methods to properly discard, let alone recycle, their trash.  Instead, it’s littered everywhere. There’s no way to easily clean it up and then the subsequent disposal or recycling is also costly and a waste of resources. Ideally we’ll all work together to find solutions… Where’s the cradle to grave corporate responsibility? 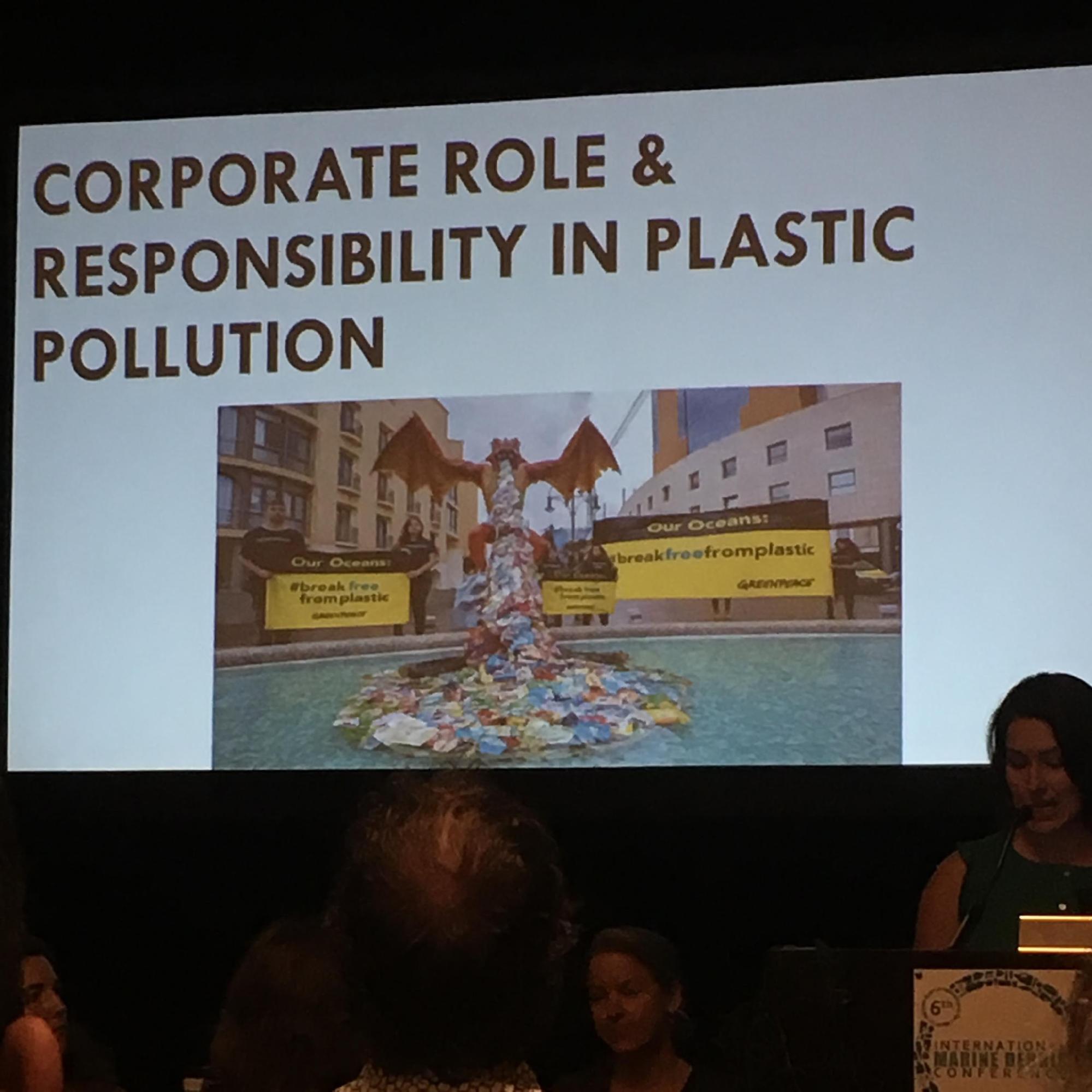 The commercial fishing industry is certainly the leading group that continually takes resources from the oceans and only gives back its discarded fishing hooks, line and nets plus other trash- not something the ocean wants.  Besides the pioneering https://bureo.co making surfboard decks and other products from the nets plus a few others following in their wake, we’re stuck with these materials since they keep re-entering the ocean as homemade fish aggregating devices (FADs).  The biggest impacts I see and work to alleviate are the direct effects on animals from entanglement and ingestion.

My scientific contribution to this vast subject was officially in the form of two posters at 6IMDC.  The first was titled,

There were ten co-authors from other NGOs, University of Hawai`i, Hawai`i Pacific University, National Oceanic and Atmospheric Administration, and National Institute of Standards and Technology.  I certainly don’t have this type of laboratory work background, so I had the fun job of collecting 150 pieces of plastic per transect in multiple locations on the islands of Maui, Lana`i and Moloka`i.

Quoting from the beginning of our abstract:

“Identifying the polymer type of plastic debris has become a necessity for waste and recycling management and environmental and public health. For the first time, polymers of beach and sea surface plastics throughout the Hawaiian Archipelago were identified using Fourier Transform Infrared Spectroscopy (FTIR). Ten beaches from Hawaii Island to Midway Atoll were sampled systematically, along with floating debris at three locations near the Main Hawaiian Islands. Approximately 4,459 pieces of primarily macroplastics (> 1 cm) were collected. Sea surface sample analysis is pending, but on beaches approximately 25% of pieces were high density polyethylene (PE) (resin code #2), 34% low density PE (#4), and 31% polypropylene (PP) (#5). The remaining 10% included PE terephthalate (#1), polyvinyl chloride (#3), polystyrene (#6), other (#7), PE/PP mixture, and unknown.” 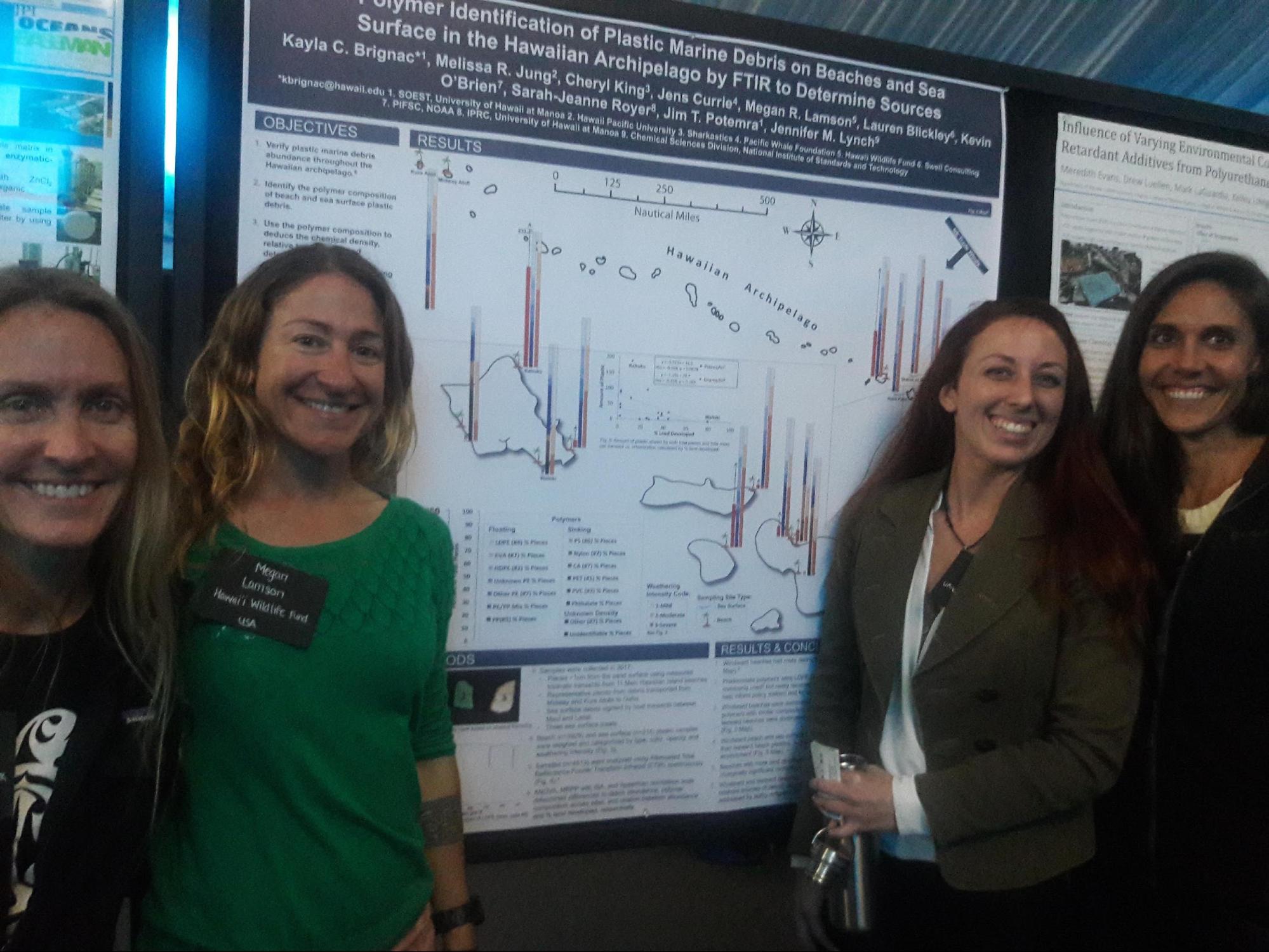 Did you know there were this many types of plastics?  It’s partially what makes the complex utilization of recycled materials so difficult since extracting the kind that’s desired isn’t easy.  Polystyrene foam, aka “Styrofoam” is a form of plastic that has been aerated for the general purpose of insulating items from cold, heat or blunt force.  It isn’t recycled and due to its light and brittle composition, it often breaks apart into smaller and smaller pieces, which are easily blown around in our environment.  The toxic impacts on humans are another subject altogether, but the harm that it often does to our ocean animals that ingest it can’t be debated despite it being a difficult subject to study.

Since July 2012, we’ve been spearheading marine debris cleanups at Ka`ehu, Maui on the 4th Sunday of every month.  Despite it being a very time consuming endeavor, sorting and counting the items we remove from the beach is a valuable activity since our long-term results help legislative actions.  The title of my second poster at 6IMDC was:

Quoting from the beginning of my abstract:

“After a ~9 year legislative process, a bill for an ordinance establishing a new chapter 20.26, Maui County Code, restricting the use and sale of polystyrene foam food service containers passed unanimously on May 18, 2017.  Maui County council members evaluated countless documents gathered by a special task force and considered thousands of opinions via petitions plus written and oral testimonies. Furthermore, the council requested an 8-person “expert panel” to deeply examine the latest facts and to get their questions clarified.  As one of these presenters, I focused on describing the data collected from 40 monthly marine debris cleanups at Ka‘ehu, Maui, Hawai’i. The majority of the 17,825 items were plastic (78.2%) followed by polystyrene foam (8.9%), fabric (4.8%), metal (3.6%), rubber (3.1%), glass (0.9%), and processed wood products (0.6%).  Beyond the 8.9% impact, bringing in samples of what had washed ashore right down the road truly resonated with council members. It’s a complicated topic, but there was no denying that if polystyrene foam items became litter, they had a significantly more negative effect on our ocean ecosystem than paper-based products that would be suggested to replace them.  Similar to banning the bag, this was simply the right thing to do for our islands and future.” 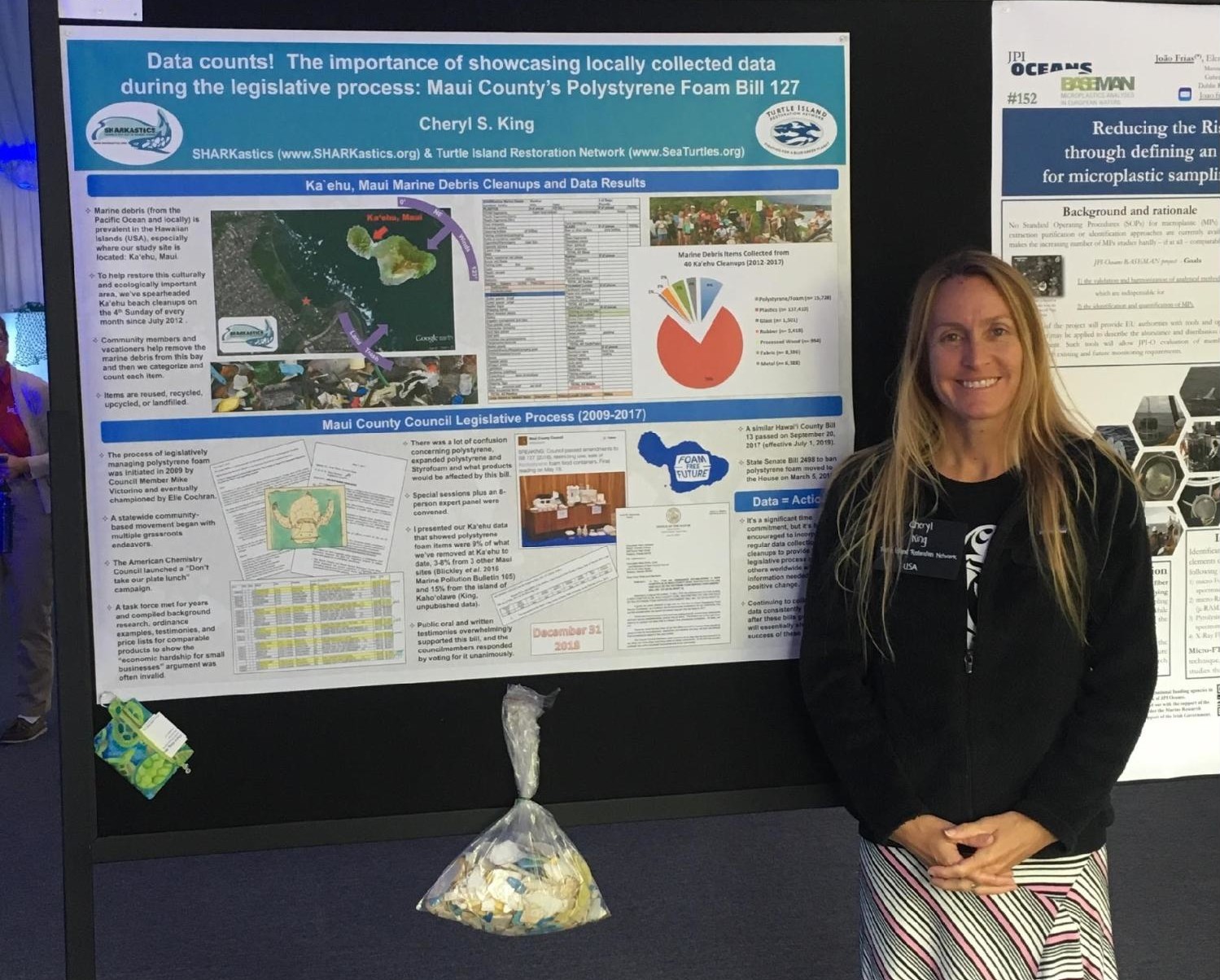 This environmental victory was a sweet one, but we’re still trying to pass a similar bill at the state level.  We’ll continue to conduct beach cleanups and count the items we removed to see how effective our Maui County bill is after it begins on January 1, 2019.  If everyone did their part, we’d be much better off. These types of grassroots activities and small changes do add up to bigger movements, but will it be enough to turn the trash tide?