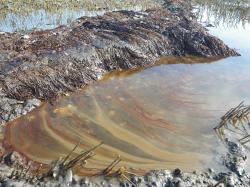 Every day, an airplane with contractors working for Taylor Energy Ltd. flies over a spot 12 miles south of the mouth of the Mississippi River looking for an oil sheen.

That spot was the doomed location of Taylor Energy’s Mississippi Canyon 20-A production platform, which towered 550 feet above 28 producing oil and gas wells drilled in water 479 feet deep.

The platform and its pipelines disappeared on Sept. 15, 2004, when Hurricane Ivan crossed the area, accompanied by winds of 145 mph and waves estimated to be 71 feet high. The heavy pressure transferred to the ocean floor by those huge waves, which crossed the area once every 16.1 seconds at the height of the storm, caused a landslide that obliterated the platform.

The platform had been secured to the seabed by eight structural piles, according to a scientific report prepared for the federal Minerals Management Service. “It was subsequently located lying in an almost horizontal orientation and almost entirely buried in sediment up to 100 feet deep, approximately 900 feet from its original location and in approximately 440 feet of water,” Taylor Energy officials said in papers filed in federal court as part of a lawsuit against the firm’s insurance company.

In one of several underwater investigations that followed, three plumes of oil and gas were found seeping from the sea floor in the vicinity of both the well casings and the downed platform 900 yards away.

Oil has been spotted at the site ever since, although the Coast Guard and Taylor Energy officials have insisted that a multimillion-dollar effort undertaken to remove the platform wreckage and plug nine of the wells has limited the pollution today to a trickle.

The Louisiana Environmental Action Network, Waterkeeper Alliance and the Appalachicola Waterkeeper, represented by the Tulane Environmental Law Clinic, are still pressing a federal lawsuit filed in February 2012 that attempts to enforce provisions of the Clean Water Act against Taylor Energy for failing to halt the flow of oil. U.S. District Judge Susie Morgan earlier this month refused to dismiss the suit on grounds that the three organizations had no standing to enforce the federal law, but is considering other motions by Taylor Energy aimed at dismissing the suit.

The Taylor Energy platform site is about seven miles north of BP’s Macondo oil well, which blew out in April 2010, resulting in an 86-day uncontrolled spill of oil.

“People all around the world, and even most people here in Louisiana, saw the BP oil disaster as an unacceptable, reckless event,” said Marylee Orr, executive director of the Louisiana Environmental Action Network. “Here we have a domestic energy company that has had crude oil leaking continuously from their wells for nine years and with no apparent consequences from the government.

“To me, the Taylor well situation is emblematic of the culture of oil and gas here in Louisiana,” she said. “Oil and gas has caused a tremendous amount of damage to Louisiana, particularly coastal Louisiana, and they face virtually no consequences for it.”

On most days, the aerial inspection by Taylor Energy finds an oil sheen, and its dimensions are repoted to the Coast Guard’s National Response Center.

On June 18, according to the report, that sheen was a bit larger than normal: 10.1 miles long and 200 feet wide, and contained 3.84 gallons of oil. But on that day, NOAA’s National Environmental Satellite, Data, and Information Service spotted the same slick from space, using NASA’s Aqua satellite. Its estimate, also reported to the center, was that the slick was 30.5 miles long and 2.5 miles wide. That report contained no estimate of the amount of oil.

Skytruth, an environmental group based in Shepherdstown, W.Va., that specializes in remote sensing and digital mapping, estimated the spill was 22 miles long and contended that the slick contained at least 65 gallons of oil. In a report released last year, the Gulf Monitoring Consortium, made up of Skytruth and other environmental groups, said its estimate of oil slicks “suggests the leakage rate is possibly in the range of 100-400 gallons per day.”

But the Unified Command established by the Coast Guard to monitor operations at the site, which includes the Coast Guard, Bureau of Ocean Energy Management, Bureau of Safety and Environmental Enforcement and Taylor Energy, discounted the Skytruth numbers. “NESDIS satellite images typically show a larger sheen than what’s reported by daily overflights,” said a statement released by the Unified Command. “The satellite image is based on a multi-spectrum sensor that views the world based on a wider spectral range than the human eye, but doesn’t have anywhere near the resolution of an overflight observer and the camera in the aircraft.”

Taylor Energy President William Perdue II would not comment on the efforts to stop the oil flow, saying that all statements had to be released by the Unified Command.

According to court records and Unified Command statements, the company has conducted a lengthy, expensive effort to halt the flow of oil.

The well is about all that is left of the company, which at one time was the largest independent oil and gas production company operating in the Gulf of Mexico. The company was owned by Patrick Taylor of New Orleans, known best for his successful campaign to create the “Taylor Plan,” which provides scholarships to academically qualified students in Louisiana, and is now known as TOPS.

Taylor died in November 2004, two months after Hurricane Ivan. Five years later, the company sold off the rest of its oil and gas production assets in the Gulf to Ankor Energy.

The efforts to deal with the lost platform began within days of the hurricane, said Taylor Energy general counsel Frank Barber III, in a 2007 letter to the federal Department of Transportation. The letter served as a request to use a foreign-flagged dredge to try to remove sediment from the well area.

An earlier dredging operation aimed at uncovering the wells so they could be properly plugged with cement and abandoned had failed. “It was during this unsuccessful attempt to uncover the wells that the actual depth of mud and sediment covering the wells was determined to be significantly greater than we had previously anticipated,” Barber wrote. “This failed excavation attempt cost Taylor more than $13 million.”

During a follow-up geotechnical survey in June 2007, officials also found “obvious liquid hydrocarbon contamination of the soil surrounding the original platform and wells down to a depth of approximately 80 feet below the sea floor,” he wrote. “Since the storage tanks for the platform’s crude oil rest on the sea floor some 600 feet away, it is reasonable to conclude from the survey data that the source of the oil is one or more wells.”

Federal officials agreed with the company that the landslide had made traditional “plug and abandon” efforts unfeasible, and allowed the company to hire Boots and Coots International Well Control Inc. to develop a proprietary plan to control the flow of oil.

“Conventional plugging and abandonment typically involves re-entering the target well internally from the surface, maintaining well control, and inserting cement plugs,” a Unified Command statement said. But because the wellheads were “severely damaged and submerged under vast quantities of mud and sediment, making them extremely difficult to re-enter, Taylor Energy utilized a well intervention strategy.”

But Coast Guard officials said nine “well interventions” were successfully completed and three underwater containment domes and an underwater collection and containment system were put in place at the wellhead area to capture any remaining oil.

The platform was removed in July 2011, and no oil was found in its tanks or piping. A pipeline leading to the platform was decommissioned in October 2008.

Meanwhile, Taylor Energy remains under orders to conduct daily overflights looking for oil, and contracts with Clean Gulf Associates for a “fast response skimmer” ship, which has been deployed only once, in July 2012, to respond to a slick, a Unified Command statement said.

An earlier version of this story incorrectly named the federal judge handling the Waterkeeper Alliance lawsuit against Taylor Energy as Susie Mague. It is being handled by U.S. District Judge Susie Morgan.
Read story online at NOLA.com.