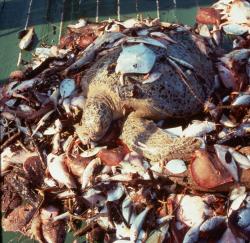 The End of Seafood?

The new ocean film “End of the Line” is the “Inconvenient Truth” of the oceans. The movie is not just another doom-and-gloom diatribe but an emotional and beautiful truth-telling that may just stimulate a worldwide movement to save our seas. I hope.

When I watched a preview copy at home the other night, I got angry, I cried, I lost hope, I regained hope, I’ve been talking it up since. End of the Line predicts the end of seafood by 2048 if the rush to fish out the seas for sushi and seafood platters doesn’t slow, and soon. Here in the SF Bay Area, we’ll be screening it at the Cal Academy of Sciences on June 11 (not posted yet).

Everyone who cares about the ocean — and those of us who just don’t know what’s happening — must see it when it opens on Ocean Day on June 8 or when it rolls out over the rest of the year.

You’ll see magnificient bluefin tuna trapped by wide dams of netting across the Straits of Gibraltar. And the fishermen who are heartbroken by the demise of the fishery.

The story of cod is re-told with footage of enraged and devastated seamen who can’t go on.

The researchers and biologists show Gore-like graphs of fishery declines of every possible species: tuna, swordfish, shark, rock fish, you name it. Only the jellyfish and shrimp survive.

The British film is based on the book End of the Line by Charles Clover and features Canadians, Europeans, Americans, and Indigenous fishers whose small outboard fishing boats are eclipsed on the water by factory trawlers.

As with Climate Change, so far we’ve seen lots of talk but little action about the decline of the world’s fisheries and the demise of our oceans. And like global warming, if we don’t act soon, the ocean may never recover from industrial high-tech fishing and mass consumption of disappearing wild fish.

What to do? Please go see the film. Lobby your local theaters to show it. Take our Seafood Pledge to stop eating tuna, swordfish and shrimp. Or why not start a movement at home, at school, at work, when dining out, to Give the Oceans a Break and don’t eat any seafood until the insanity stops. If you can do it, maybe I can too.