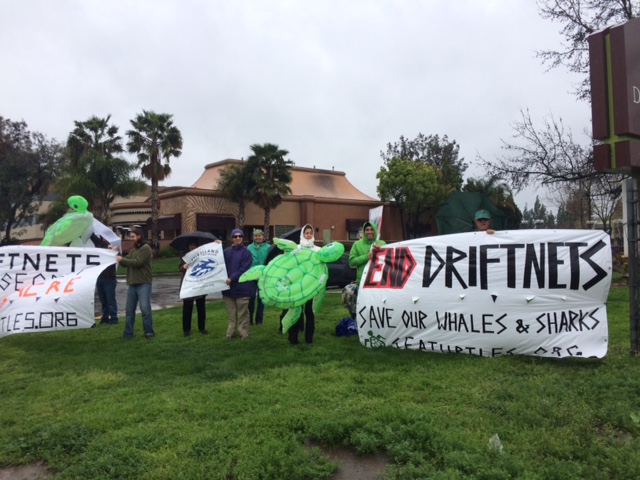 The Fishery That Killed 16 Endangered Sperm Whales in One Year

Right off the coast of California, a deadly fishery is having profound impacts on the ocean. And some of the worst victims of the driftnet fishery are whales, dolphins, and sea lions. But you can help put an end to these “curtains of death” by taking one simple action.

Driftnets, set out primarily to catch swordfish, are huge, nearly invisible nets that catch anything that swims into them. These nets are a mile long – the length of the Golden Gate Bridge – and 400 feet high creating a deadly barrier to ocean life.

Driftnets are universally recognized as a terrible fishing method. They were banned on the high seas by the United Nations in 1994. On the West Coast, California is the last state to use this method to fish for swordfish.

Driftnets are a death sentence for marine mammals that get entangled and drown as they struggle to reach the surface. Over the past decade, 885 whales, dolphins, seals and sea lions were killed by the swordfish drift nets. Recently, an estimated 16 endangered sperm whales were fatally injured. In a single year.

Many schemes have been tried to limit the high collateral damage to marine species including adding acoustical pingers to reduce entanglement of dolphins and porpoises, time-area closures to reduce sea turtle and shark bycatch, and lowering the net depth to reduce whale entanglements.

Despite these schemes, more than 70 percent of the ocean life caught by these nets is discarded, injured or dead.

Only about 20 vessels are left in this outdated fishery, providing few jobs. Yet federal fishery managers, under pressure from a small group of individuals, continue to promote this destructive, unnecessary and unhealthy fishery.

Environmental organizations and concerned citizens are now demanding that our political representatives permanently retire this fishery and stop the strip mining the California coast before more whales, dolphins and sea turtles die in these “curtains of death.”

As a result of our work, a Senate bill has been introduced in California to phase out this fishery.

You can get involved in one simple way: