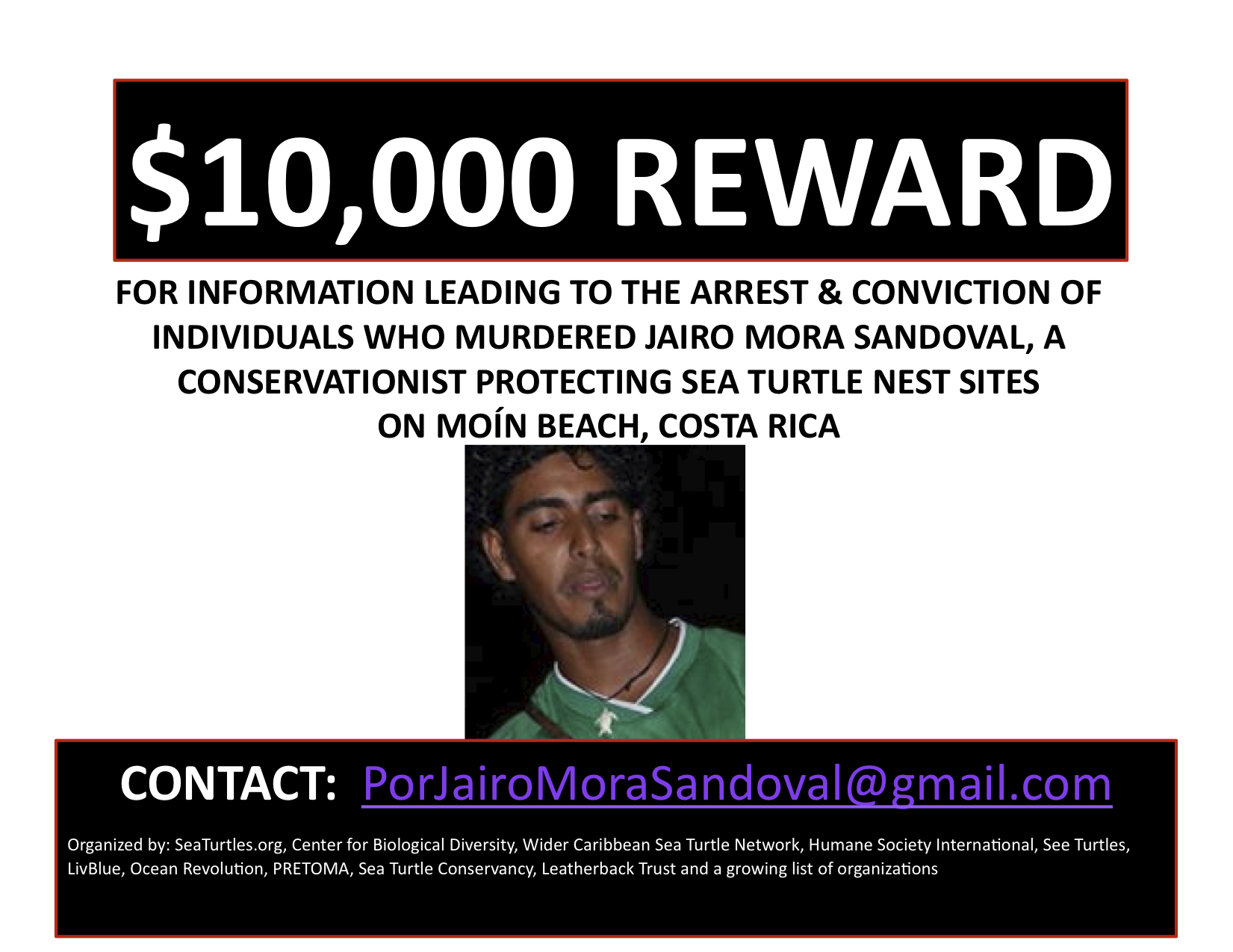 Conservation groups today announced a $10,000 reward for information on the brutal killing of Jairo Mora Sandoval, a sea turtle activist working to protect nesting sea turtles on Costa Rica’s Caribbean coast near Limón. According to media reports, the 26-year-old conservationist was kidnapped by armed men on Thursday; his body was found a day later.

Environmental organizations around the world are calling for justice and today announced the Jairo Mora Sandoval Reward Fund for information leading to arrest and conviction of those responsible.

“Jairo’s murderers must be brought to justice so that sea turtle conservationists in Costa Rica and around the world know that this will never be tolerated,” said Todd Steiner, a wildlife biologist and executive director of SeaTurtles.org. “The whole world is watching to make sure the Costa Rican government brings these thugs to justice and makes sea turtle nesting beaches safe for conservationists to do their work.”

“Jairo worked bravely and tirelessly to protect countless precious lives,” said Jaclyn Lopez, an attorney with the Center for Biological Diversity. “We must redouble our collective efforts to ensure dedicated conservationists and the precious wildlife they defend are protected from cowardly criminals. Jairo’s assassins must be swiftly brought down.”

“Our emotional connection to each other, the sea turtles and their environment is what drives this work and makes Jairo’s death so heartbreaking, yet empowering,” said Wallace “J” Nichols, research associate at the California Academy of Sciences. “We all hope his death will somehow lead to more life.”

Mora was on sea turtle patrol with four foreign volunteers when he was ambushed by at least five masked men. The four women were also abducted in the attack, but survived. Mora was bound, badly beaten, and shot in the head.

Mora worked as a beach monitor for the Wider Caribbean Sea Turtle Conservation Network (WIDECAST), which has seen an increase in sea turtle poaching. In fact, the night of the abduction, there was an intensified police and Coast Guard presence in response to the rise in poaching.

As a result of Mora’s murder, WIDECAST has closed its sea turtle monitoring program on this coast

“We cannot risk the lives of these young people who work so tirelessly to protect Costa Rica’s imperiled sea turtles,” said Karen Eckert, Executive Director of WIDECAST. “First the government must do its job and bring the killers to justice – only then can the biologists and conservationists return to the beach to do the important work of ensuring the survival of these ancient creatures.”

Poaching, the illegal killing of sea turtles and taking their eggs, is a leading factor driving sea turtles toward extinction. As a result, sea turtles, including the leatherback sea turtles that nest on the beach Mora monitored, are protected by several laws, including Costa Rica’s Marine Turtle Population Law of 2002 and the U.S. Endangered Species Act. Locally based sea turtle monitoring gives these ancient creatures a fighting chance at survival.

Contact PorJairoMoraSandoval@gmail.com  or call Costa Rica 00506 22360947 with information on the crime.

The Jairo Mora Sandoval Reward Fund is growing and is currently being supported by the following organizations: