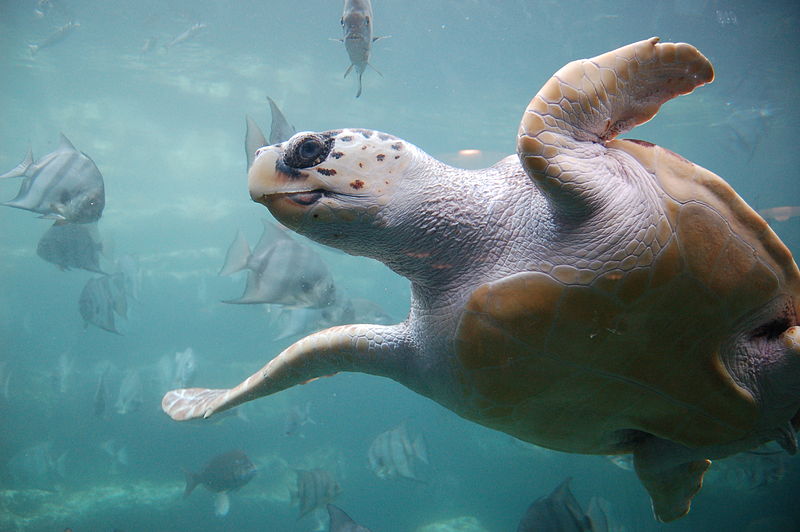 MEXICO CITY— As President Obama raises thorny trade issues in Mexico today, U.S. conservation groups are calling on him to tackle fisheries reform as well. Coinciding with the president’s trip to Mexico this week, the groups formally urged him to impose trade sanctions against Mexico if the country doesn’t take immediate action to stop its massive endangered loggerhead sea turtle bycatch. Each year Mexican fisheries off the southern Baja California peninsula kill more than 2,000 endangered loggerheads as they fish for halibut and sharks.

With support from Mexico-based nongovernmental groups, the U.S.-based Center for Biological Diversity and Turtle Island Restoration Network filed a legal petition with the Obama administration seeking a ban on Mexican seafood or other imports to the U.S. until Mexico reduces its sea turtle mortality.  Download petition in PDF below.

“The U.S. requires its fishermen to stop netting and hooking loggerheads, but Mexico refuses to do the same,” said Sarah Uhlemann, a senior attorney with the Center. “To save this cross-border species, President Obama must push for action at the highest levels.”

Under an American law referred to as the “Pelly Amendment,” the conservation groups’ petition asks the United States to officially recognize or “certify” that Mexico’s sea turtle bycatch “diminishes the effectiveness” of the Inter-American Convention for the Protection and Conservation of Sea Turtles. Under this treaty, Mexico, the United States and other nations have committed to reduce bycatch to “greatest extent practicable,” yet loggerhead bycatch remains substantially unregulated in Mexico. If the secretary of commerce agrees, President Obama may then ban Mexican imports until sea turtle bycatch is reduced.

Loggerhead sea turtles in the North Pacific Ocean are listed as endangered under both U.S. and Mexican law, but bycatch continues to threaten their existence. Sea turtles often drown after becoming entangled in gillnet gear or getting hooked on longlines that target finfish and sharks. The United States has required its fishermen to adopt sea turtle bycatch prevention measures, including closing high-risk fishing areas. But Mexico has not taken similar action to curb its loggerhead bycatch.

In January, the United States “identified” Mexico for its unsustainable loggerhead bycatch under a separate U.S. law, the Protected Living Marine Resources statute, which requires nations to be formally identified, certified and sanctioned for failing to adopt bycatch measures comparable to U.S. protections.

•    Loggerhead sea turtles have reddish-brown, slightly heart-shaped top shells and can reach 3 feet in diameter. They can live more than 50 years.

•    After hatching in Japan, North Pacific Ocean loggerheads migrate more than 7,500 miles to the waters off the western Baja California peninsula to feed on red crabs, squid and sardines. The same turtles move into U.S. waters off California during El Niño years. Mature turtles then make the return trip to nest at the beaches where they themselves hatched. The population has roughly 7,000 adult females.

•    In 2011 the United States changed the legal status of North Pacific Ocean loggerheads from “threatened” to the direr “endangered” under the Endangered Species Act. Similarly, Mexico has listed the loggerhead as “in danger of extinction.”

•    Negotiated in 1996, the Inter-American Convention for the Protection and Conservation of Sea Turtles requires range states to prohibit direct killing of sea turtles, reduce bycatch and protect key habitat areas. Nations will meet in Ecuador in June to discuss the treaty’s implementation.

•    The United States has successfully used Pelly Amendment sanctions in the past to enforce whaling quotas and stop rhino and tiger trade in Taiwan.

Turtle Island Restoration Network (SeaTurtles.org) is an international marine conservation organization headquartered in California whose 60,000 members and online activists work to protect sea turtles and marine biodiversity in the United States and around the world. www.SeaTurtles.org Take action to protect the loggerheads here.