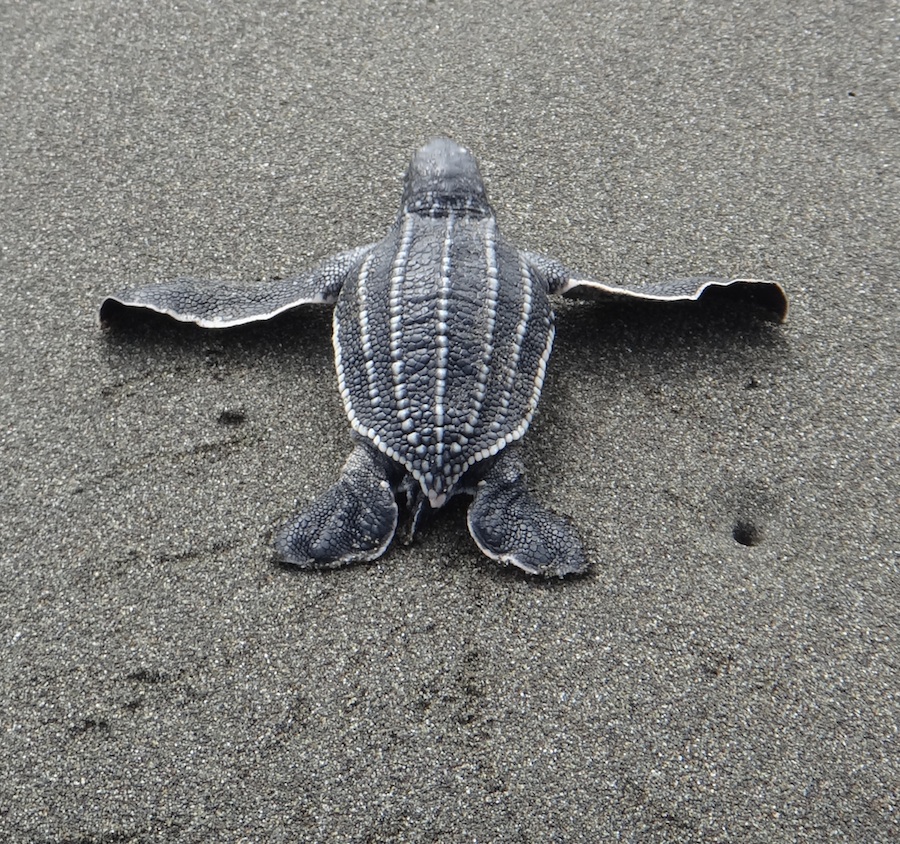 Sea turtle conservation workers are removing plastic garbage from important sea turtle nesting beaches across Costa Rica as part of a new project to study the concentration of garbage and help reduce it. Garbage is harmful to endangered sea turtles, especially juveniles, that accidentally eat it or become entangled in it. The project is a collaboration between international conservation groups PRETOMA, SeaTurtles.org, and Project AWARE.

Teams have conducted scientific assessments of the exact density of garbage, also known as marine debris, along beaches, removed hundreds of pounds of the debris, and spread awareness of the harmful impacts of plastic pollution to sea turtles. The project has taken place at Estacion Las Tortugas in the Caribbean and on the Pacific Coast at Playa Caletas, Playa Coyote, Playa San Miguel, and Playa Costa de Oro.

“It’s very important to understand that plastic garbage lasts for tens, maybe hundreds, of years in the marine environment,” says project leader Chris Pincetich, Ph.D. of SeaTurtles.org. “The plastic garbage is harming sea turtles and the chemicals in it are becoming part of the fishes we eat.”

“The continuation of this project will not only help keep the local beaches free of garbage but also educate local community members and tourists how to be more responsible with their rubbish in the future” said Lotti Adams from Turtle Tracks (http://www.turtle-trax.com), a Costa Rican business placing volunteers at sea turtle nesting beaches working on the project.

“Plastic pollution in the ocean is a problem around the world and all countries, including Costa Rica, need more education about it and more action to clean local beaches,” said Jerry Lust an intern working withPRETOMA on the project.  “We are cleaning hundreds of pounds of garbage off of nesting beaches, not just telling people about it.”

PRETOMA sea turtle field stations at Playa Caletas and Costa de Oro are now action and awareness centers to clean the marine environment, research the many problems created by plastic in the ocean, and teach local people ways to create less plastic waste. Scientific data to understand the type and concentration of plastic pollution in Costa Rica is being collected using a standard survey method employed by scientists in other countries.

The project is called “Creating Plastic-Free Sea Turtle Habitat” and is funded by Project AWARE, an international ocean conservation organization composed primarily of scuba divers. College students have been performing the scientific garbage density studies at sea turtle nesting beaches under the guidance of Dr. Pincetich for two years in Costa Rica. The project now aims to expand to more beaches and educate thousands of people.

“I hope Costa Rica can take steps to provide municipal garbage removal and recycling of plastic for the public at all coastal communities,” said Dr. Pincetich. “Many countries have already taken steps to reduce the demand for disposable plastic products, like plastic bags and bottles, that are the most common items we find and remove from beaches.”

Scientists have documented sea turtles around the world that have been killed after accidentally eating plastic. One study found over 35% of deceased leatherbacks had plastic inside of them, a problem observed as far back as 1960.