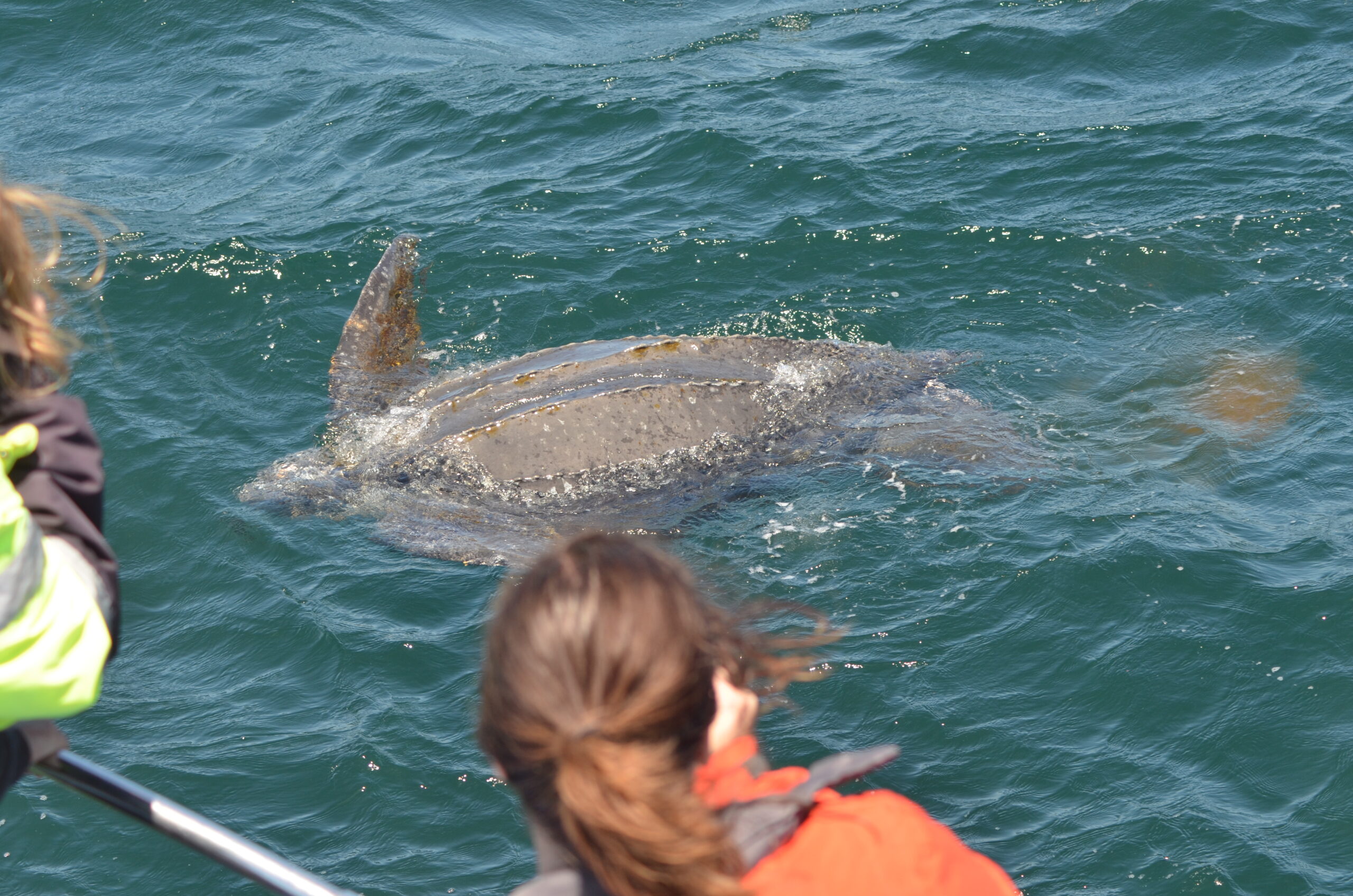 Moss Landing – The first confirmed sighting of an endangered leatherback sea turtle on Sunday, June 16th in Monterey Bay marks the start of their annual summer feeding season off the coast of California.

Passengers onboard the Sanctuary Cruises whale watching vessel out of Moss Landing enjoyed a long visit from the turtle, which parked itself next to their vessel long enough for everyone to see it and take photos. The sighting was important to the all-volunteer, citizen science Leatherback Watch Program, run by the non-profit SeaTurtles.org, who maintain a database of West Coast sea turtle observations.

The Pacific leatherback was named California’s official marine reptile last year.  The highly endangered sea turtles migrate across the entire Pacific Ocean, over 6,500 miles each way, to feed on abundant jellyfish in a newly designated critical habitat zone encompassing 16,910 square miles off the Central California coast. Scientists estimate they may disappear forever in the Pacific in just 20 years if conservation efforts are not improved.

“Witnessing a leatherback here in California is a rare  and spectacular event,” said Chris Pincetich, Ph.D. the manager of the Leatherback Watch Program with SeaTurtles.org. “ “They’re the biggest, fastest swimming, and deepest diving of all sea turtles and marine biologists still have a lots to learn about them.”

Leatherback Watch Program partners with whale watchers, yacht clubs, scientists, and naturalists to record opportunistic sightings of Pacific leatherbacks along the West Coast. They offer special expeditions, co-led by Dr. Pincetich, into the critical habitat area with the goal of spotting one of the elusive giants (www.seaturtles.org/events).

Last year, Pacific leatherbacks were named the official marine reptile of California after a bill sponsored by SeaTurtles.org passed through the Legislature unopposed. The bill not only recognizes leatherbacks as a state symbol, but also encourages schools to educate their students about leatherbacks.  In addition, October 15th every year is designated as Pacific Leatherback Conservation Day, which is meant to bring statewide awareness about leatherbacks and celebrate conservation efforts.

Leatherbacks are the biggest of all sea turtles, with the largest growing up to eight feet long and weighing close to a ton.  They survived the extinction of dinosaurs over 65 million years ago, but now face the threat of extinction in the Pacific.  Their population in the Pacific has declined by approximately 90 percent since the 1980s due to commercial fishing, illegal poaching, vessel strikes, entanglement in marine debris, and plastic pollution ingestion.  Of these, commercial fishing, particularly drift gillnets pose the largest threat to leatherbacks offshore of California.  For over twenty years, the Sea Turtle Restoration Project (www.SeaTurtles.org) has worked from California and the Gulf Coast of Mexico with communities across the globe to protect endangered leatherback sea turtles.