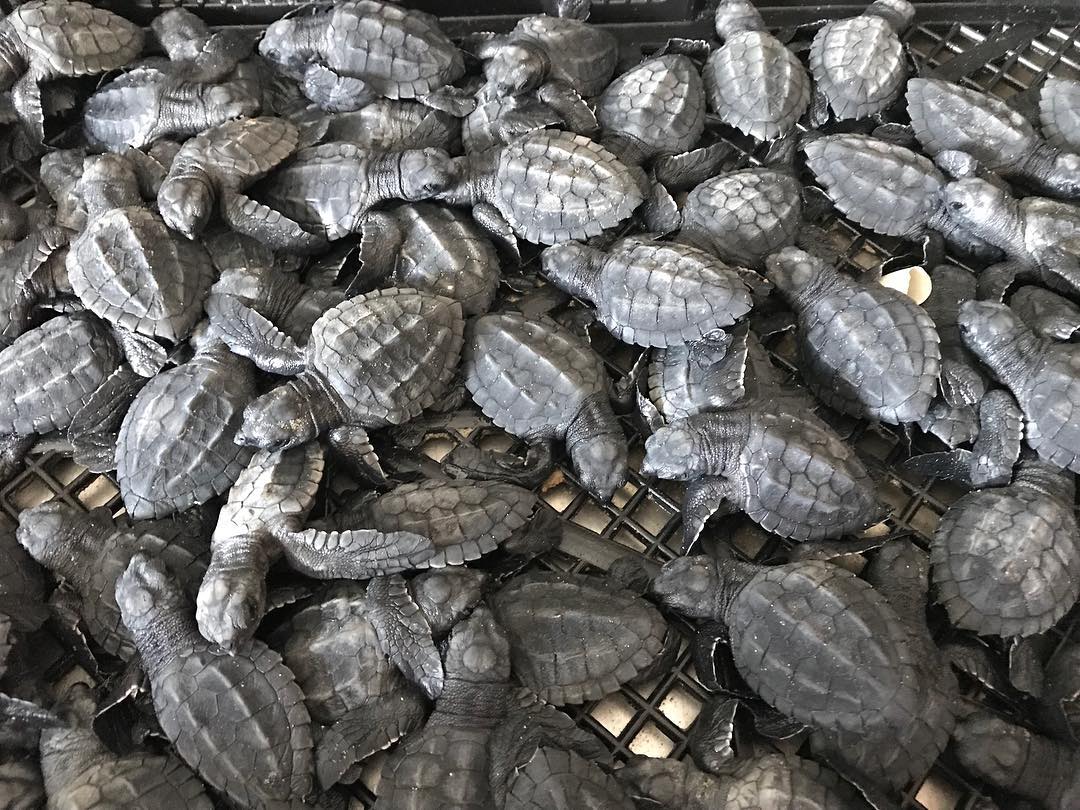 After a successful nesting season, we had the opportunity to travel to Rancho Nuevo, Mexico; the main nesting site for the critically endangered Kemp’s Ridley sea turtle. Our partners from Gladys Porter Zoo, Jaime Pena and Javier Montano, coordinated the trip for us as we flew from Houston to Tampico and traveled with staff from the camp to Rancho Nuevo by truck.

Upon arrival at the camp site on a Monday morning we immediately were included in patrolling the beaches for nesting sea turtles. On our first day, we assisted in 32 nests, processing the female sea turtles and relocating eggs to the safety of a corral. ATV patrols this late in the summer are run three times a day, 7 AM, noon and 5 PM to detect nesting Kemp’s ridley sea turtles. With the majority of the females seen nesting during the noon patrol.

Patrols for green sea turtles are at midnight, 4 and 7 AM, and we were able to observe and participate in green sea turtle patrol, excavation of the nests and placement of the eggs into the corral.

The nest corral at Rancho Nuevo.

We spent an entire afternoon “cleaning” these in situ nests after hatchlings had emerged earlier that morning. Data is recorded for all nests and hatchlings that are not quite ready to head to sea are taken to the “maternity” wing back at the camp. The camp have a very high in situ emergence success rate for hatchlings.

Kemp’s Ridleys are known for having only one “frenzy” or energetic period where they have the ability to swim out to the safety of seaweed mats past the wave breaks. Sometimes, there are a few stragglers who need extra time before they can manage that excursion. The government of Mexico is also on site to patrol and manage Green sea turtle nests through the Comision of Nacional de Areas Naturales Protegidas. We were able to patrol at 4 AM and witness these much larger reptiles digging nests and laying eggs on the beach. These eggs are also moved to the corral and placed alongside other Kemp’s Ridley nests approximately 80 cm between each nest.

The numbers are not final from the six camps in Mexico, but hopes are high they will reach a milestone of 25,000 nests for the Mexican coast. Kemp’s Ridley nests to date on the Texas Coast stand at 250.

While we see significantly fewer females nesting on our beaches, every single egg, every single hatchling, and every single sea turtle is critically important for this endangered species. One of the biologists, Erika Ang, was a crucial part to the success from their trip and a huge asset to us while we were at the camp. The staff of Rancho Nuevo are an amazing group, whose efforts are the real factor of success for the species and we are so grateful for the experience and time they offered to help educate us on the Upper Texas Coast.