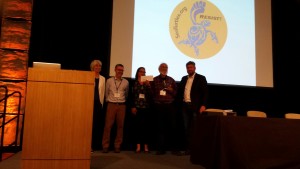 NASHVILLE, TN — Turtle Island Restoration Network, an environmental organization based in Marin County, won a $10,000 “Innovation in Technology” Award at the TechForward Conference in Nashville, TN, for its ongoing project to individually recognize endangered scalloped hammerhead sharks in order to protect and restore the species.

“The goal is to create a computer algorithm that can do what the human eye can’t— recognize individual sharks,” said Todd Steiner, Executive Director of Turtle Island Restoration Network. 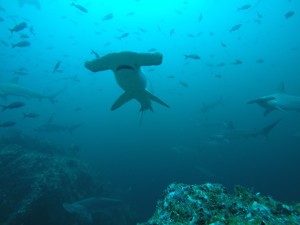 He continued, “Think NCIS — any diver or researcher submits their photograph into the system, and in a second the computer program determines if there is a match and lets them know if their shark is already in the system, and if so, where and when it was previously seen.”

Studying wildlife populations underwater, especially of highly migratory species like hammerhead sharks, has been problematic for scientists and has prevented basic understanding of population dynamics necessary and critical to the conservation of shark species around the world.

“This is incredibly exciting. If successful, the Hammerhead photo ID project will transform our knowledge of marine species and improve our understanding of population size, longevity, site residency, and movement of sharks. Furthermore, using historical photos, we will able to look back in time and estimate shark populations of the past so we can better understand the declines that make these species endangered today,” said Steiner. 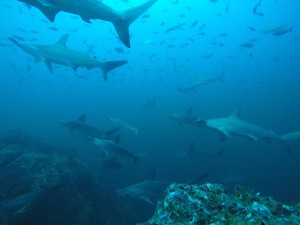 “We thank TechForward and its partners TechSoup, Microsoft, Oracle+ Netsuite for this award, and look forward to building new partnerships with these organizations,” said Steiner. “We also thank Our Children’s Earth Foundation and the members of Turtle Island Restoration Network for its support to turn this idea into reality.”