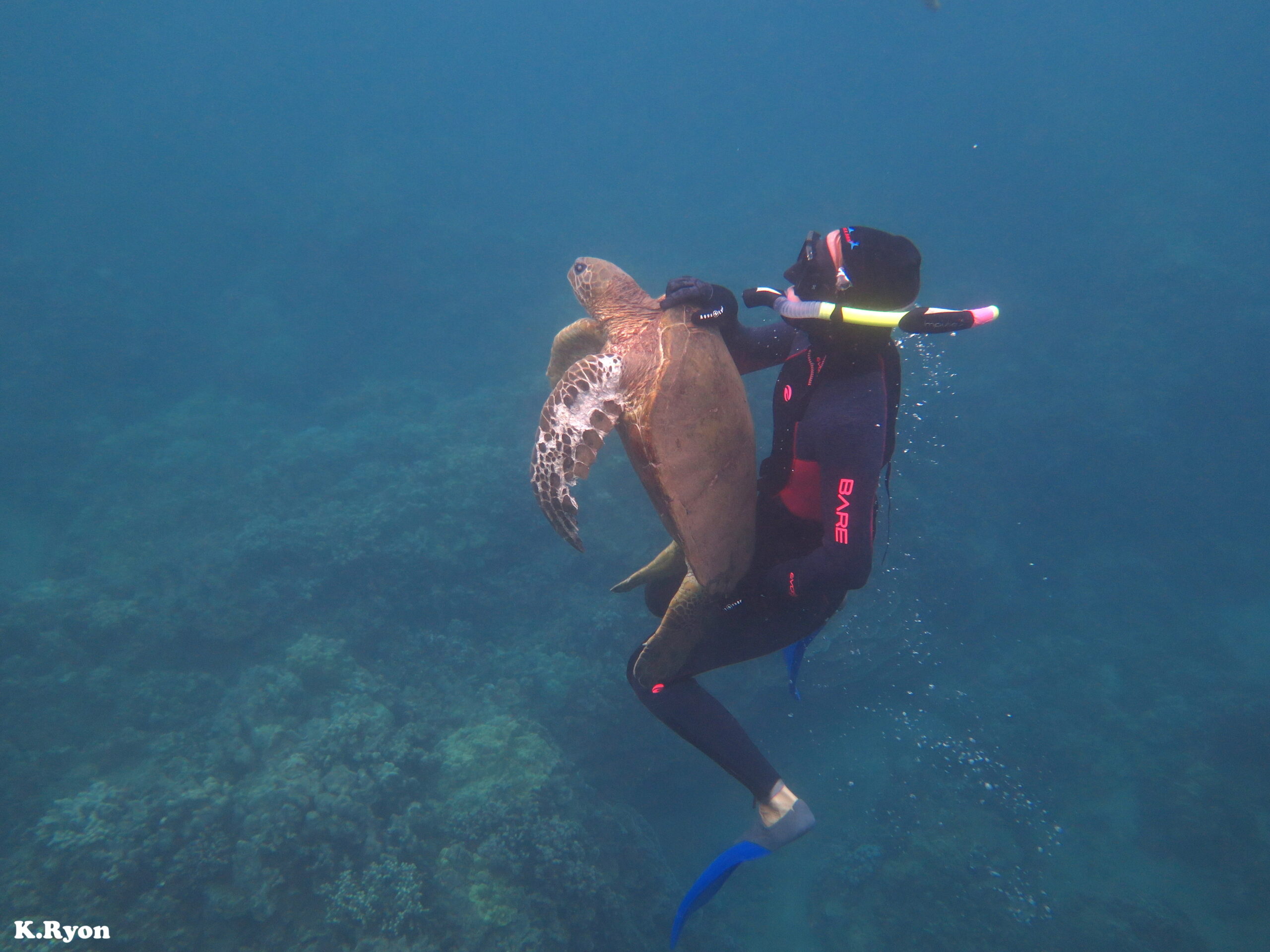 It was a “chilly” (~75 degrees) early Sunday morning as 18 of our family and friends gathered at the Kihei Boat Ramp for our 4-hour ocean tour aboard the bright yellow Maui Snorkel Charters inflatable boat (https://mauisnorkelcharters.com).  Since we are always grateful for this company’s support of our coral reef and ocean cleanup activities, it was the perfect choice for this day of family fun (most of the passengers were visiting from Idaho).  Since the North Pacific humpback whales were visiting Hawai’i as well, we were hoping to see a lot of them plus go snorkeling in a couple different locations. Their company hashtag is #BestDayEver, so we were all excited!

All aboard the boat, we motored out of the harbor and the glassy Pacific Ocean conditions were perfect for sea turtle spotting.  We didn’t have to go far at all since there’s a green turtle cleaning station just around the bend. As we slowly drifted over towards the dozen turtles casually bobbing at the surface, everyone got really excited as their eyes began to focus on what initially looked like rocks until the little heads popped up for their morning breaths.  For a few people on the boat, these were the first “honu” (their Hawaiian name) they’d ever seen.

Sea turtles are always such an awesome sight to see!  Unless… there’s something wrong with them… As we were enjoying watching them surface to breathe a few times and then dive back under the water, I noticed that a medium-sized honu had some white markings on its left front flipper.  I immediately knew this wasn’t good since it likely meant that it was somehow entangled and the flipper’s circulation was being cut off, causing the tissue to die. I got a clear look at it and then anxiously pointed it out to everyone.  As it took its last breath and dove down my heart sank with it. It wasn’t in the plan for the day, but I was quite accustomed to these types of schedule changes. I knew we needed to check it out closer or I wouldn’t be able to stop thinking about it.  Captain Doug was supportive, so I asked if anyone wanted to jump in with me to see if we could find the turtle on the reef. As we quickly suited up, I explained to the crew (one of which, Kiera, was an intern of mine a few years ago so was well aware of why we had to find the turtle) that I might have to bring the turtle aboard if its condition was as bad as I suspected. 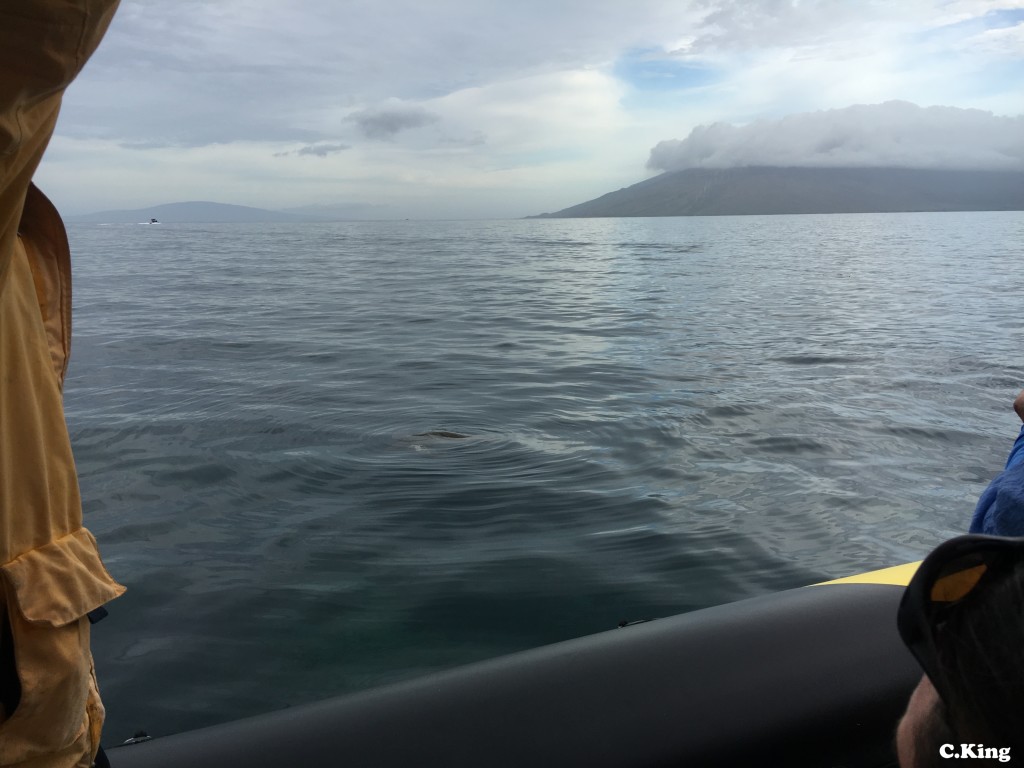 Five of us jumped into the water, which was chilly and a little gloomy since the sun still hadn’t risen above Haleakala yet, and started searching.  Besides all of the healthy turtles, all we found was a little white tip reef shark under a coral ledge. That made others want to jump in to say they “swam with sharks in Hawai’i”, which is awesome- we need more shark enthusiasts!  We expanded our search and after about 15 minutes, our buddy Hans yells out, “hey guys, I see the turtle with the white flipper!”. Indeed, he had spotted it resting ~15 feet deep. I freedove down to take photos and get a better look and confirmed that it was a serious case of entanglement in fishing line.  The clear monofilament line was so deeply embedded that the only part that was visible was a small protruding piece. I didn’t see any hooks or line on the rest of the turtle’s body, which is often the case, but knew this turtle needed medical attention. 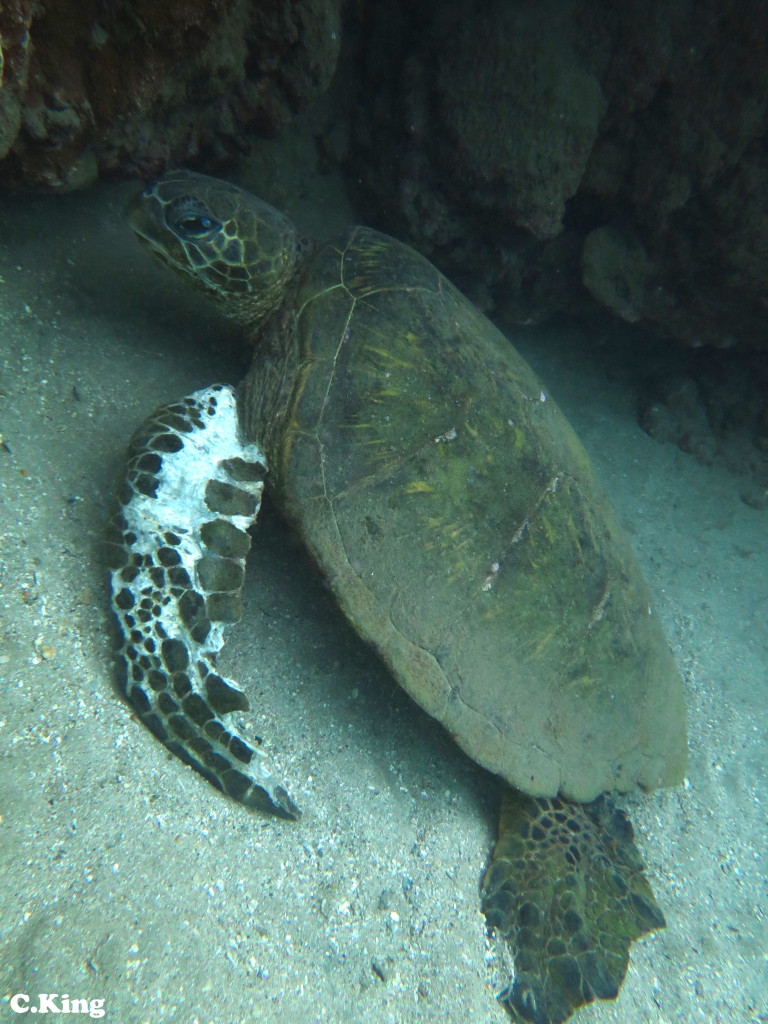 Since I wasn’t planning on doing any turtle rescues, I didn’t have my “Turtle Taxi” with me.  This is a custom raft that an 8th grader I was mentoring named Ellie and I designed and assembled for turtle rescues.  The Turtle Taxi makes everything much easier, but we’d have to try without it. I went over my plan with Hans, Jake and Kiera: I was going to freedive down and bring the turtle to the surface and then swim the turtle to the stern’s swim ladder where I’d need their help to lift it up.  If I signaled them, Kiera and Jake (my boyfriend of eight years who has helped with an uncountable amount of turtle and other animal rescues) were each going to be in charge of a front flipper since that’s the most dangerous part of catching a turtle. The flapping can happen extremely quickly and their clawed flippers can cause serious injury.  Please keep in mind that this should not be attempted by untrained people. The best way to help is by making a note of the turtle’s location and calling the stranding hotline asap.  And of course, picking up any trash and discarded fishing gear also helps a lot!

Every turtle catching experience is unique since they all react differently, and you can never be too cautious, but since I’ve been working closely with turtles for over 20 years I felt confident we were going to be successful.  Sure enough, the turtle was rather mellow as I brought it to the surface and swam it to the boat where we carefully lifted it aboard. Putting a towel over the turtle’s eyes helped it remain calm as we assessed it closer. It was actually one of the worst cases I’ve seen: the flipper was so necrotic that one of the bones was protruding.  It had likely been suffering with this condition for months. I’m not a veterinarian, but knew that the flipper would have to be amputated. 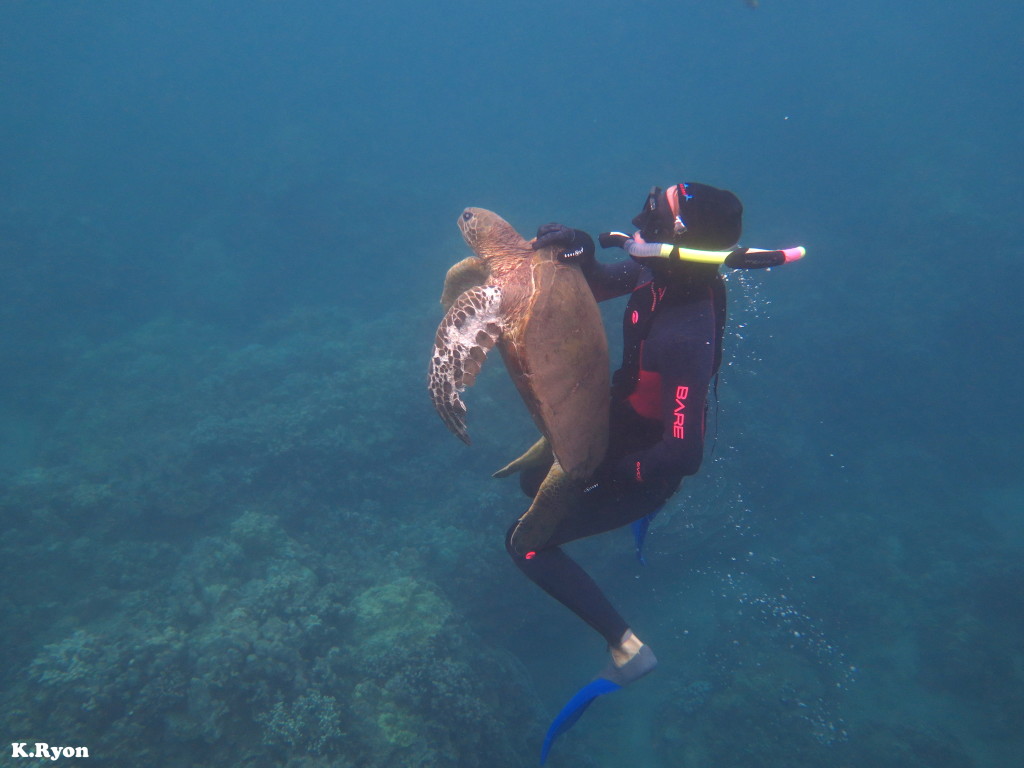 As I explained the bad news to everyone, I sent photos and called the South Maui Sea Turtle Stranding Hotline (808-286-2549), one of the projects I used to manage before working for TIRN.  My friend Tommy answered and after I explained the situation he said he’d meet us back at the boat ramp. While we waited, we did a little sea turtle talk to answer questions plus share my fascination with sea turtles.  They truly are amazing creatures and crucial components of our nearshore ecosystems. It’s tough being a turtle with all of the human-induced stressors; especially dangerous fishing gear interactions. 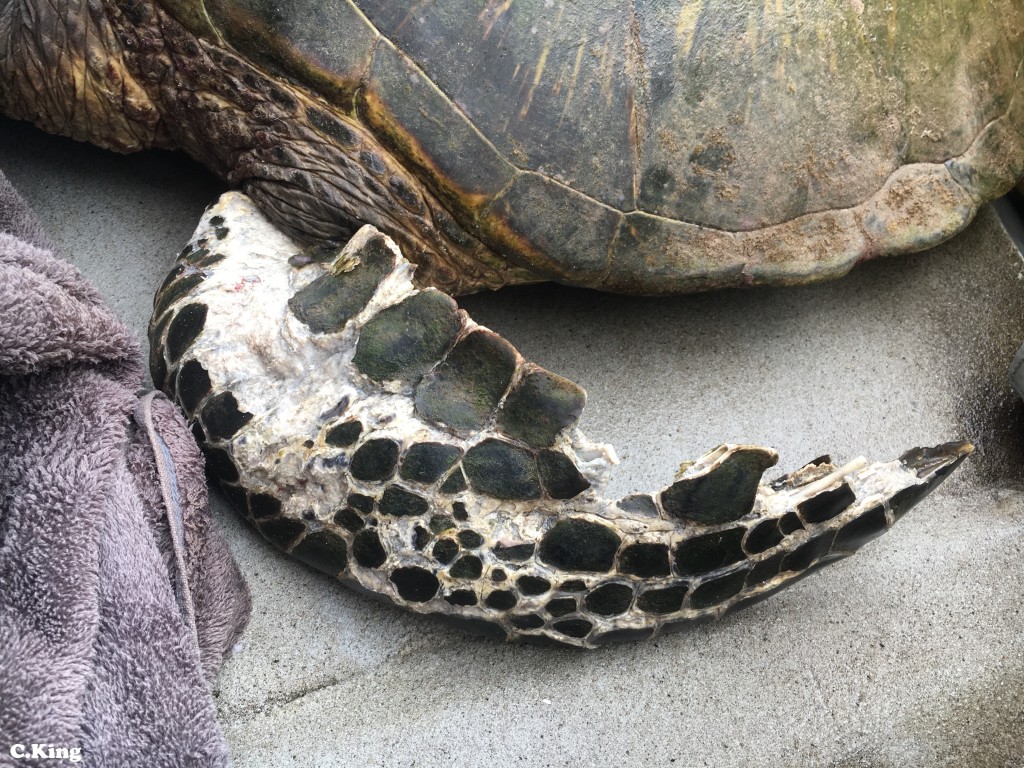 We loaded the turtle into the back of Tommy’s Jeep and he took it to the Maui Ocean Center Marine Institute, where it would await its flight to the National Oceanic and Atmospheric Administration Pacific Islands Fisheries Science Center (NOAA PIFSC) facility on the island of O`ahu. Along with far too many other cases, we had coincidentally worked closely with this same group of dedicated biologists when our team and I caught a turtle with a very similar entanglement situation in which its right front flipper had to be amputated due to fishing line. This turtle became NOAA’s ceremonial 1000th Hawaiian sea turtle rehabbed when we released it last September.

After nine days of being rehabbed after its surgery ~5 hour at the NOAA facility on O`ahu, our Maui turtle was ready to be flown back to us. 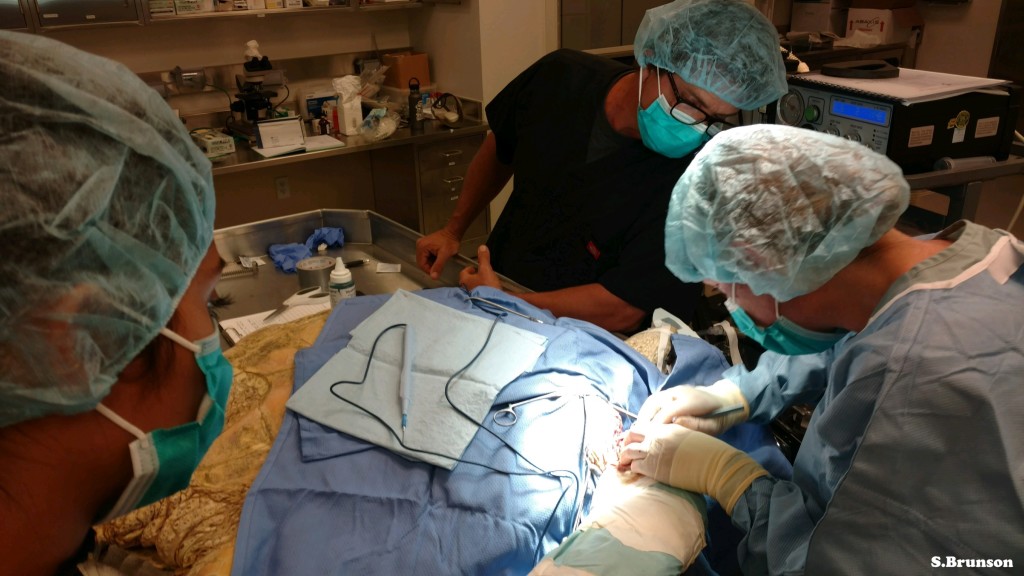 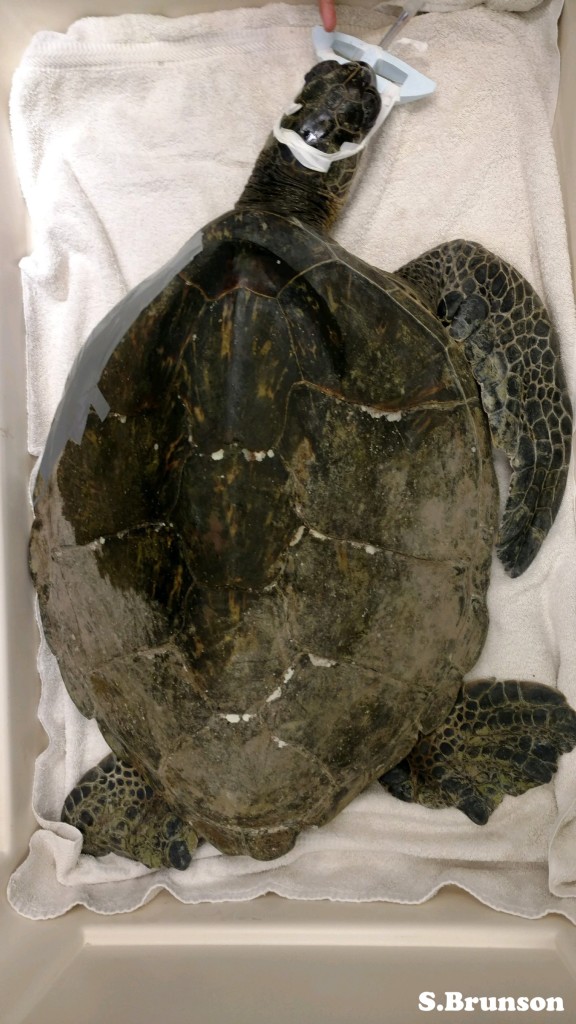 Its number was 1011, which was harmlessly painted in temporary white paint on the left side of its carapace (top part of its shell) near its now absent left front flipper.  Besides having a scientific number plus tag numbers (NOAA inserted microchips in its rear flippers, similar to what cats and dogs receive), it’s easier to remember human-like names.  We chose “Kea”, which is the Hawaiian word for “white”, since that’s what caught my eye while it was at the surface. 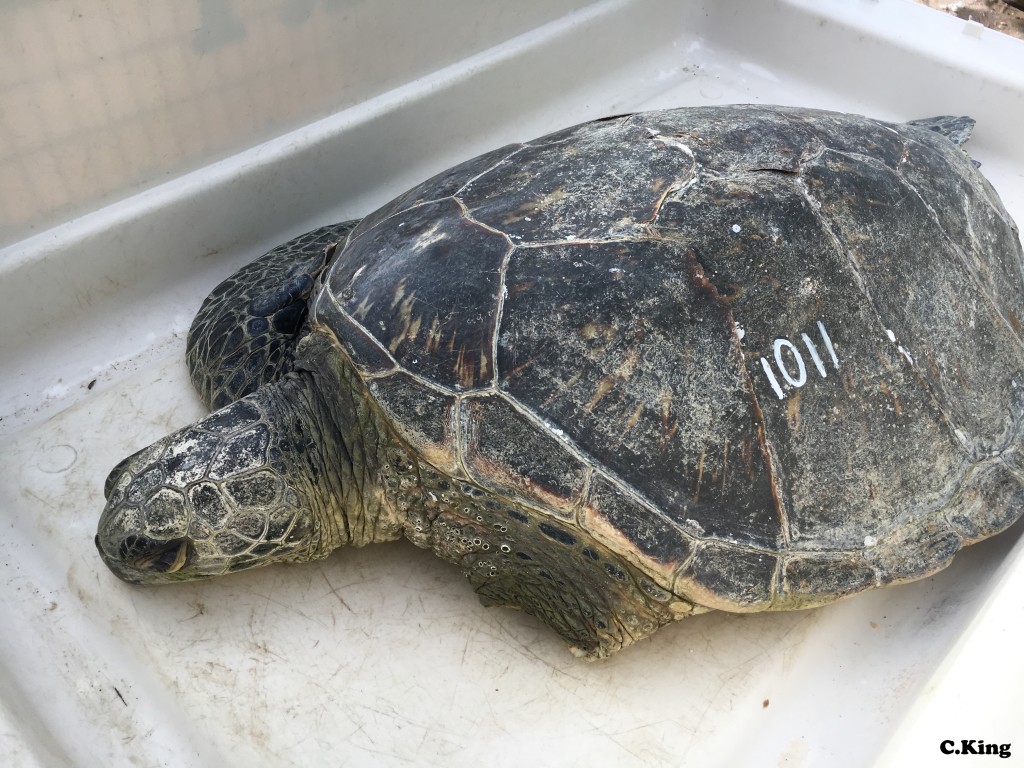 MOCMI’s Monique delivered Kea to an excited group of turtle enthusiasts including the owners of Maui Snorkel Charters, their captain and crew and a couple of our friends who were on the boat that day, plus some of our devoted Turtle Team members for assistance.  We all paraded Kea to a small pocket beach just to the south of the Kihei Boat Ramp, where we could have a private release. After answering all questions, it was time. Captain Doug and I each picked up one side of Kea’s carapace and we walked in synch towards the shore break.  Turtles are heavier than they look… According to Aloha Air Cargo, Kea weighed in at ~160 pounds, which was a bit of a surprise to me despite knowing that adrenaline always seems to help us during rescue attempts. I held Kea’s right side, so felt a gently flapping of its remaining flipper as it realized we were heading towards the ocean.  What a journey Kea has had (none of the other turtles are going to believe it)! Wading out into knee-deep water, we waited for the perfect little wave to wash in before lowering Kea enough to let the motion of the ocean do the work of pulling it out towards the reef. We all saw Kea take a breath, and then it swam off into the sunset. 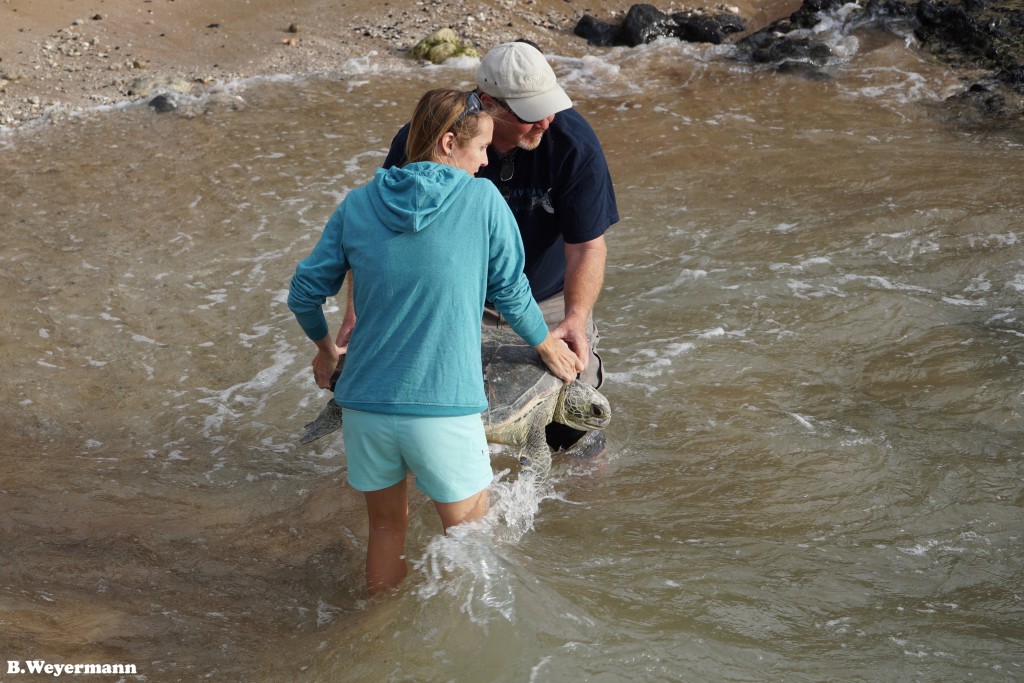 You may be wondering: can a turtle survive with only 3 flippers?

Yes, and it won’t just swim around in circles… Sea turtles are extremely resilient animals and Kea will adapt, although it will make daily life a little trickier.  We don’t know its gender since it hasn’t reached sexual maturity yet, but regardless, swimming all the way to its mating and nesting areas will be its most physically demanding task with only one front flipper.  Males mate by clasping the carapace of the females with their front flipper claws, so mating will likely be out of the question if Kea is a male. Nesting females have to crawl up past the beach’s high tide line and then create their body pit in the sand by moving the soft sand out of the way with their front flippers before digging their egg chamber with their rear flippers.  Missing a front flipper will make the whole nesting process challenging, but it can certainly be done. It’s truly important for turtles to fulfill their ecological role in the Hawaiian coral reef ecosystem, so returning Kea to the wild is a wonderful success story.

Good news: the very next morning after its release, our Turtle Team spotted Kea back at a nearby cleaning station where we originally caught it!  We’ll continue to keep monitoring it into the future. You can help by reporting any numbered or tagged turtles by emailing your sighting information to respectwildlife@noaa.gov.  Please report any injured or dead turtles to the statewide stranding number: 1-888-256-9840.

Mahalo to all who were involved!  Any day we can help a sea turtle certainly is the #BestDayEver. 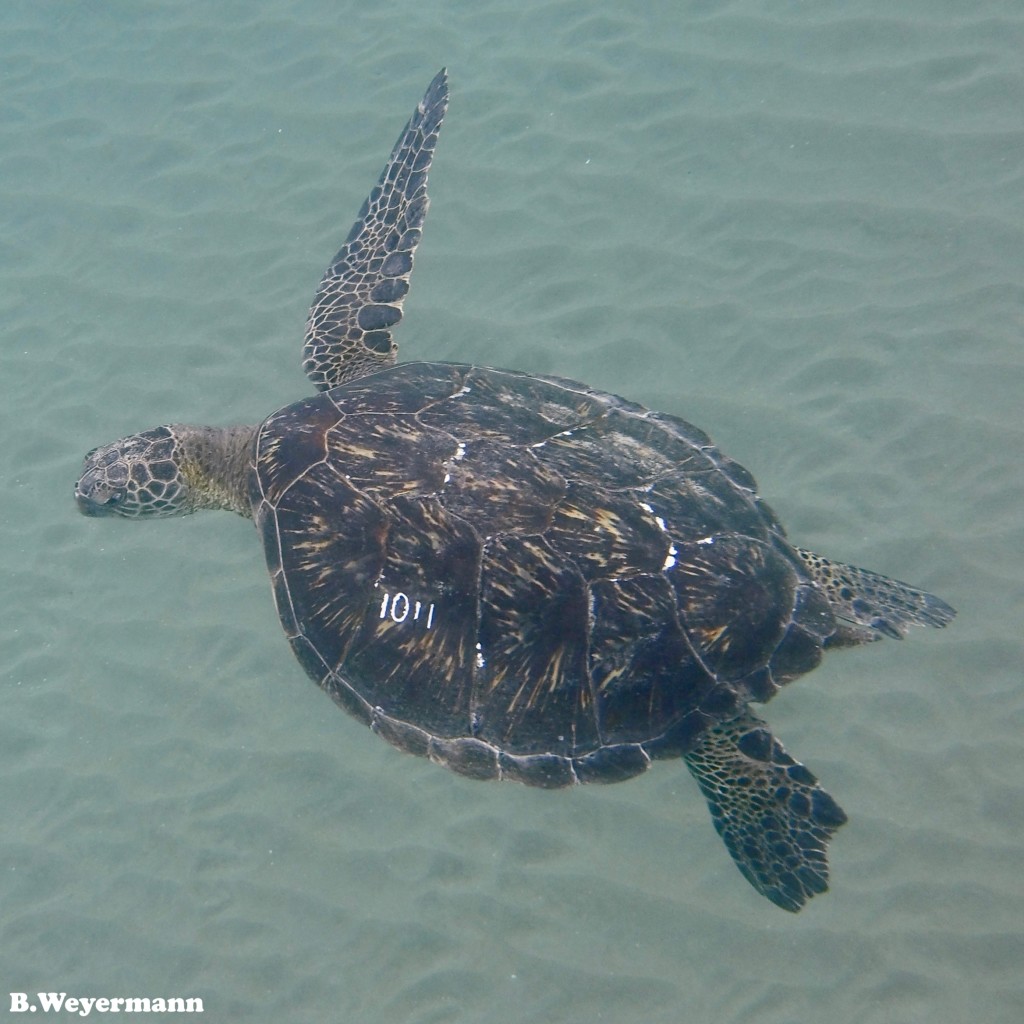