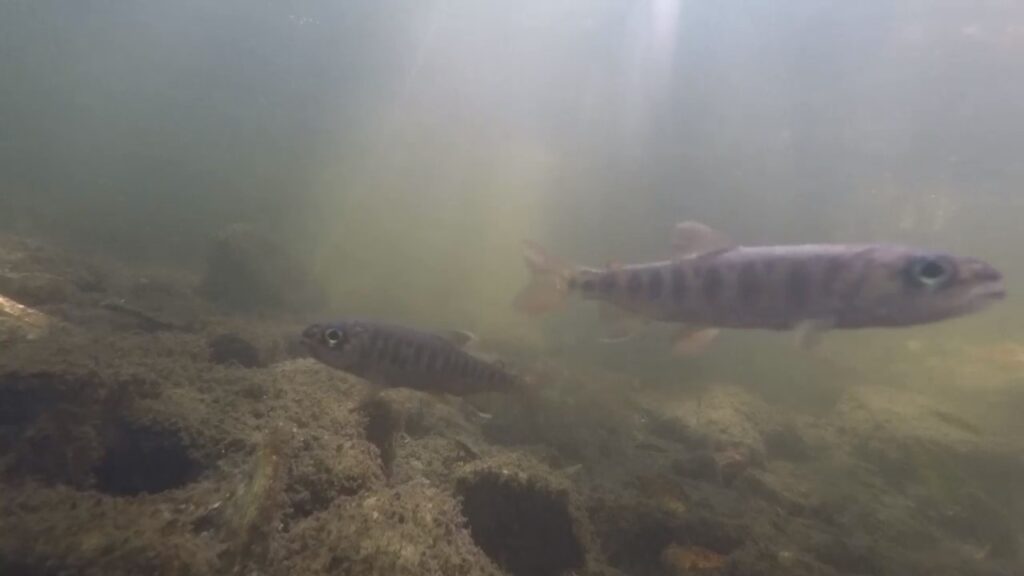 This footage was taken along a property Turtle Island Restoration Network recently acquired to protect critical habitat for endangered salmon in perpetuity.

Read below for more information about these three species.

By then, they will be about four to six inches long and they will start to lose their bars and turn silvery and are called “smolts.” Along the way they will take up residence in Tomales Bay, where their physiology will transform them to be able to survive in saltwater.

By the time they enter the Pacific, they will be completely silver and will spend about 18 months at sea and mature to reproductive age with a length of about two feet and weighing around eight pounds. They will then reverse their migration and return to San Geronimo Creek through Tomales Bay, changing their physiology back into freshwater fish.  Their appearance will also change, from silver to red, and males grow a protruded hooked jaw called a kype. The male fish will use the kype to jostle with other males for the opportunity to fertilize the eggs of a female coho.

This fish with a horizontal stripe along the side, is a species in the minnow family, and is also about two inches long in this video. Roach can grow to be about four to five inches long. These fish probably also hatched this spring or early summer. They are adapted to survive harsh conditions when many streams stop flowing  and water temperature rises and oxygen decreases. They feed on filamentous algae, which, evidenced by the video, are quite abundant in this pool. Tomales Roach are listed as a Species of Special Concern (IUCN Status, Near-threatened) due to climate change.

This angular-shaped fish is a small fish usually one to two inches long with a highly forked tail fin. You can see the three-spined stickleback in this video darting around in jerky movements feeding on the abundant filamentous algae. This species is widely distributed in West Coast coastal streams, but some populations live in the ocean, estuaries, and bays.  Some populations live their whole lives in freshwater or saltwater, and some populations are anadromous–live in saltwater but return to spawn in freshwater, like salmon.

To learn more about our land acquisition program, visit https://seaturtles.org/critical-land-acquisition/