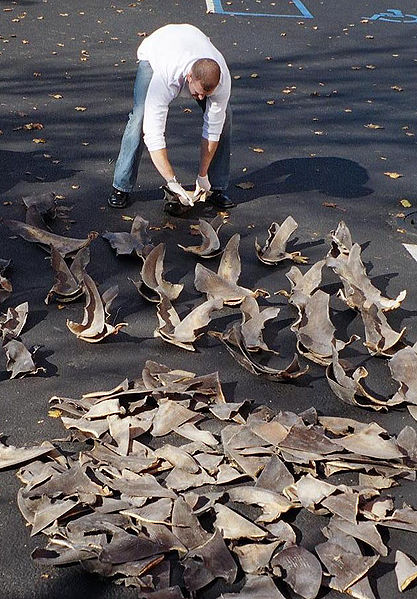 Why a New Law Aims to Ban Shark Fins in Texas

We all know there are sharks in the Gulf of Mexico. But why would Texas lawmakers care? A bill that went before the Senate Natural Resources Committee Tuesday says they should.

State Senator Larry Taylor, R-Friendswood, whose district includes Galveston, filed Senate Bill 572, which would outlaw the buying and selling of shark fins. Shark fins are a sought-after ingredient for shark fin soup and foods considered a delicacy in some Asian dishes. They can sell for up to $700 dollars a pound.

One of several witnesses who spoke for the bill was Ellis Pickett, with the Texas Upper Coast Chapter of the Surfrider Foundation.

“What they are doing is bringing in the largest sharks that they can and clipping their fins off,” Pickett told the committee. “And, well, that just ain’t fair.”

While the process known as “finning” is banned by federal law, the sale and trade of shark fins isn’t. Only five states have enacted bans like the one Texas is considering. So why do it here?

Testimony from Kayla Ellis, a senior at a Dallas-area high school, showed that shark fins are actually on the menu at some Texas restaurants, from Dallas to Houston to Galveston.

“One case that I found I asked if that had shark fin dumplings, at Maxim’s Restaurant [in Dallas]” Ellis testified. “The hostess immediately became edgy and asked me to leave. I later had my friend that speaks fluent Chinese and they told her they did in fact sell shark fin dumplings.” Ellis said she had found shark fin on the menu at multiple restaurants.

“I found that even restaurants that are legally allowed to sell shark fin products are censoring themselves,” Ellis said.
And the practice of shark finning has begun to cross the border, Ellis testified. As Mexican waters have been depleted of sharks due to finning (where it is legal), “they are now coming into our waters to catch our sharks and fin them,” she said. In one instance, a five-mile long gill net with 300 sharks trapped in it for finning was found, Ellis said.

Shark finning is popular among poachers because of the high price for the meat, and you can fit a lot of fins onto a boat (the shark carcasses are simply thrown back into the sea).

The bill wouldn’t ban shark fishing in Texas, as fisherman would still be allowed one shark catch per day. Entire shark carcasses could still be sold. The bill would only prohibit possession of shark fins with intent to sell, making it a Class B Texas Parks and Wildlife misdemeanor. So if a fisherman wanted the fin for himself, that would be allowed by the proposed law.

Katie Jarl, Texas State Director for Humane Society, testified that she and the society support the bill because of animal welfare and ecological impacts.

“The fins from up to 73 million sharks are used to supply the global shark fin trade each year,” Jarl said. “With their fins cut off sharks cannot swim and will die. Not only is in inherently cruel but is unsustainable. This is a measure to eliminate our state’s contribution to the global trade in shark fins.”

There was no testimony against the proposal.

Senator Taylor asked the committee to hold off on voting on the bill because he may change some wording in it. It is currently pending in committee. There is an identical companion bill in the House, HB 852, by Representative Eddie Lucio, D-Harlingen. If passed the law would go into effect in July 2014.