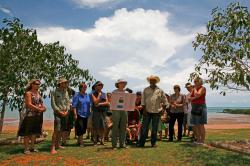 FLIP PRIOR, The West Australian
December 15, 2010, 5:04 pm
http://au.news.yahoo.com/thewest/a/-/wa/8518554/worldwide-groups-join-fight-againt-gas-hub/
Worldwide environmental groups threw their support behind Kimberley groups fighting the proposed gas precinct at James Price Point today with a united front in Broome.
A “statement of global support” signed by 25 international conservation groups including Sierra Club, Friends of the Earth and Cetacean Society International, each representing millions of members, warned of “severe and irreversible” impacts on the environment if the project went ahead. Read rest of the story online, link above.

International pressure to stop Kimberley gas hub
Posted December 16, 2010 11:34:00
http://www.abc.net.au/news/stories/2010/12/16/3094772.htm?site=kimberley&section=news&date=(none)
(ABC Local: Ben Collins)
Conservation groups are trying to put international pressure on the State and Federal governments to stop the proposed gas hub at James Price Point from going ahead.
25 international conservation groups have presented the Broome community with a statement pledging their opposition to the proposed hub.
The groups are calling on the State and Federal governments to protect the Kimberley from industrialisation by petroleum and mining companies.
Teri Shore, from the Turtle Island restoration network in California, says she wants to raise the international alarm to stop development going ahead.
“My job is to raise the profile with these international groups,” she said.
“This global statement of concern about the Kimberley is just the first step in mobilising international groups to support the protection of the Kimberley.”
Teri Shore says their main goal is to stop the gas hub at that site.
“There are alternatives that are easily available to these companies, we have also talked to some of the companies and they aren’t all that keen on this site, I think a number of them would be happy to move it somewhere else,” she said.