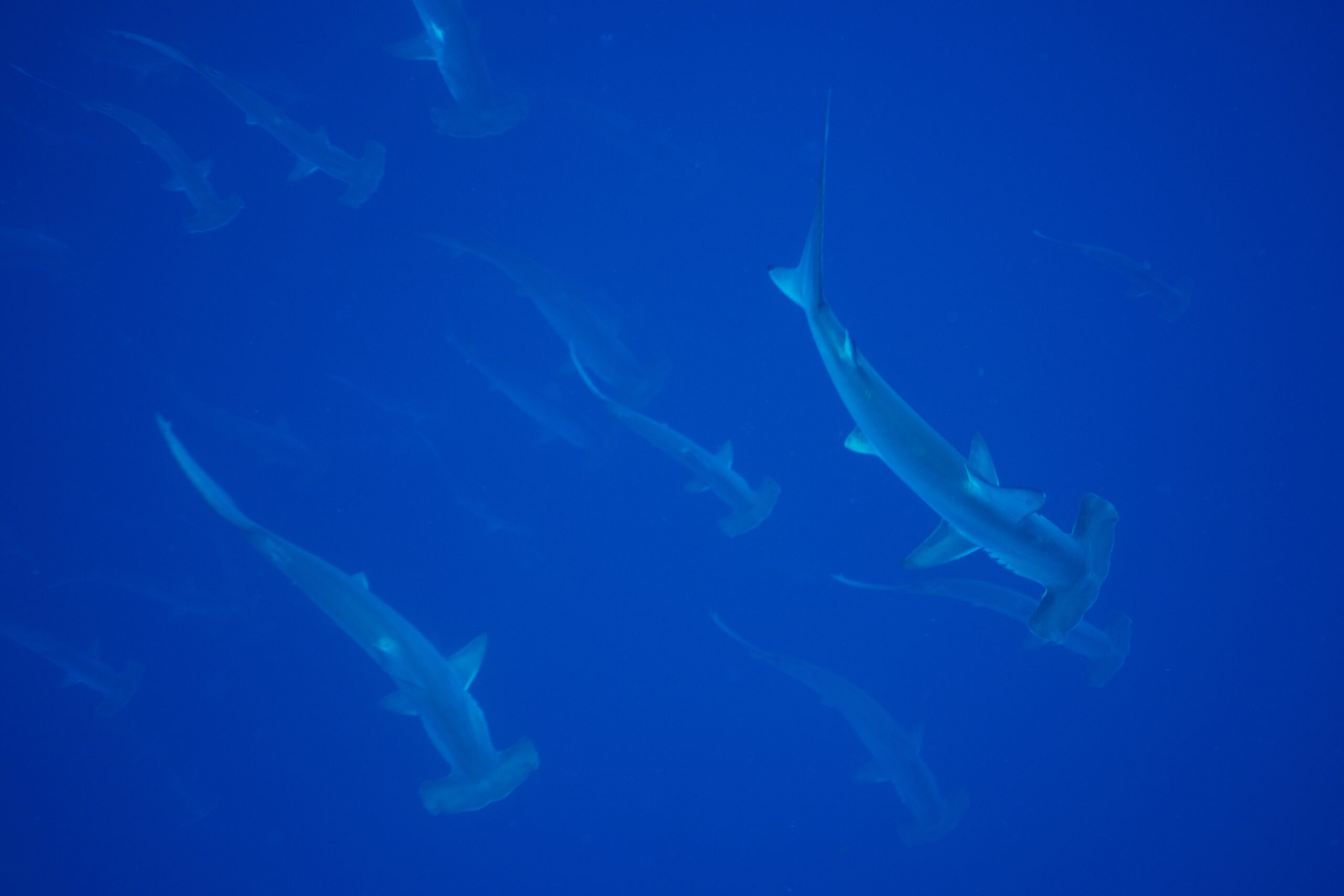 Turtle Island Restoration Network just returned from our April 2019 Cocos Island Dive Expedition. This is part three of a series highlighting the trip, as reported by Executive Director and Trip Leader Todd Steiner. (Read part one and part two.) Our next expedition is in June 2019. Please join us! 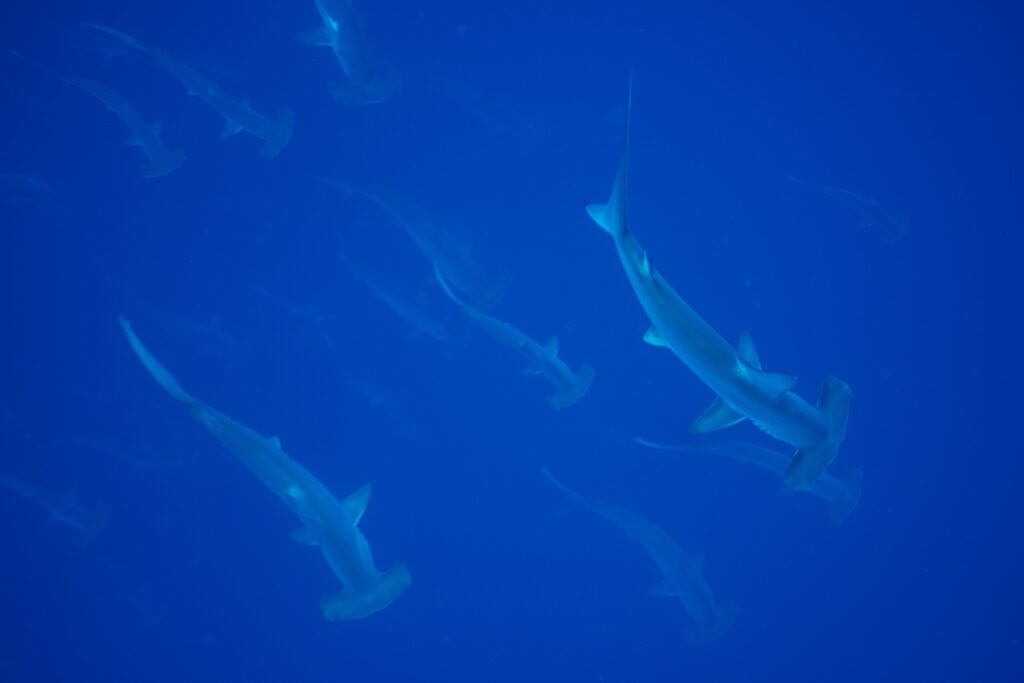 Many people travel specifically to Cocos Island to witness and photograph the “wallpaper” of hammerhead schools, almost exclusively female, that number in the hundreds. This expedition did not disappoint!

Large schools of scalloped hammerhead sharks were seen at Dirty Rock and Alcyone, and moderate-sized schools were also seen at Manuelita. Smaller groups of hammerheads were also seen throughout the week, regularly and up close at Coral Garden, slowly gliding by just a meter above the sandy bottom at the coral-sand ecotone, swimming through the Channel. At least some hammerheads were seen on almost every dive! 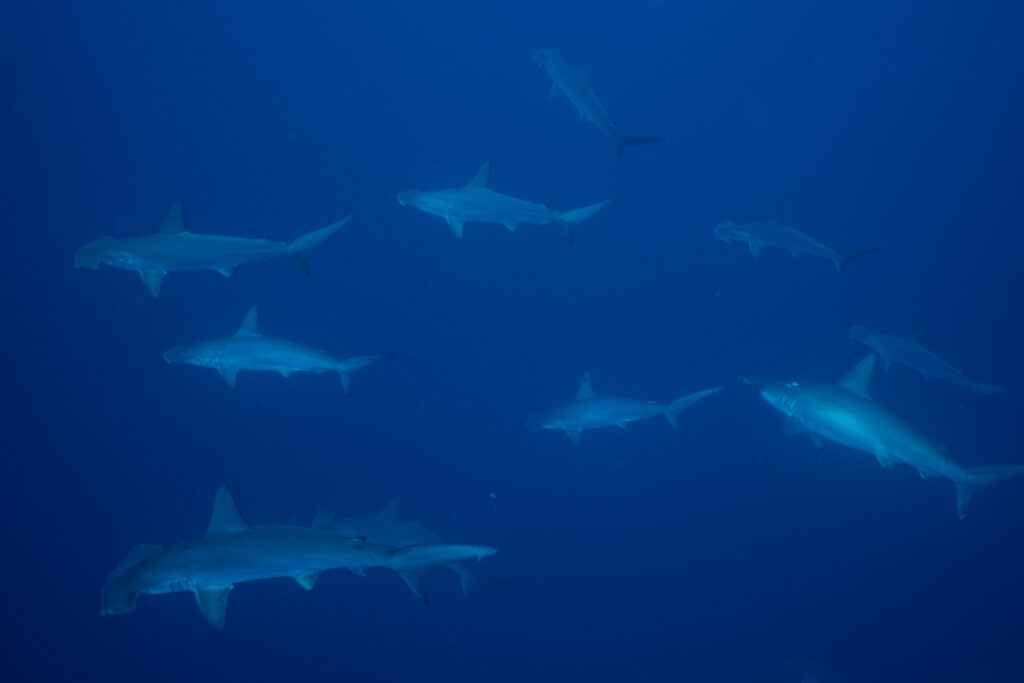 Close encounters with hammerheads is another specialty of Cocos, especially at cleaning stations, some of the Island’s most fascinating places underwater. At Cocos, there are several established shark cleaning stations where hammerheads and a few other shark species visit congregations of smaller fish, mostly barberfish and king angelfish.

The sharks circle around clusters of cleaner, slowing down – sometimes almost coming to a stop – tilting sideways while these smaller fish make a meal of picking at the shark’s skin. The area near the gills, often badly scarred and sometime raw from recent mating encounters, appear to be especially attractive to the cleaner fish.

The best hammerhead cleaning action on this trip was at Dirty Rock and Manuelita outside, but some cleaning behavior was observed at Alcyone and Punta Maria, where at the latter both hammerheads, Galapagos and black-tip sharks were actively being cleaned.

Not surprisingly, these places are the best areas to tag hammerheads. On this expedition all five hammerheads were tagged at Dirty Rock. 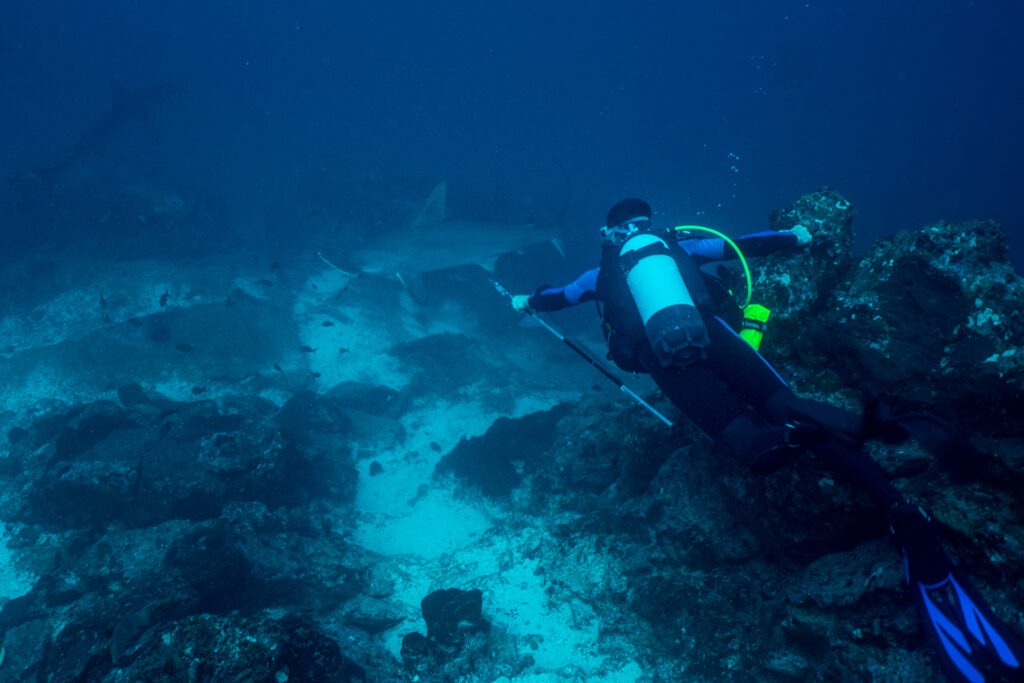 Cleaning behavior is an example of mutual symbiosis where both organisms, in this case the cleaner fish and the cleaned shark, benefit from the interaction. Some cleaners are generalists, like the barberfish which may service as many as 10 species. Others are more selective, such as the Twinspot triplefin, that appears to focus on the starry grouper, also known as the flag cabrilla.

Many marine fish species display similar cleaner behavior, and if you allow your attention to focus away from the megafauna at Cocos Island, similar interactions are occurring all around you!