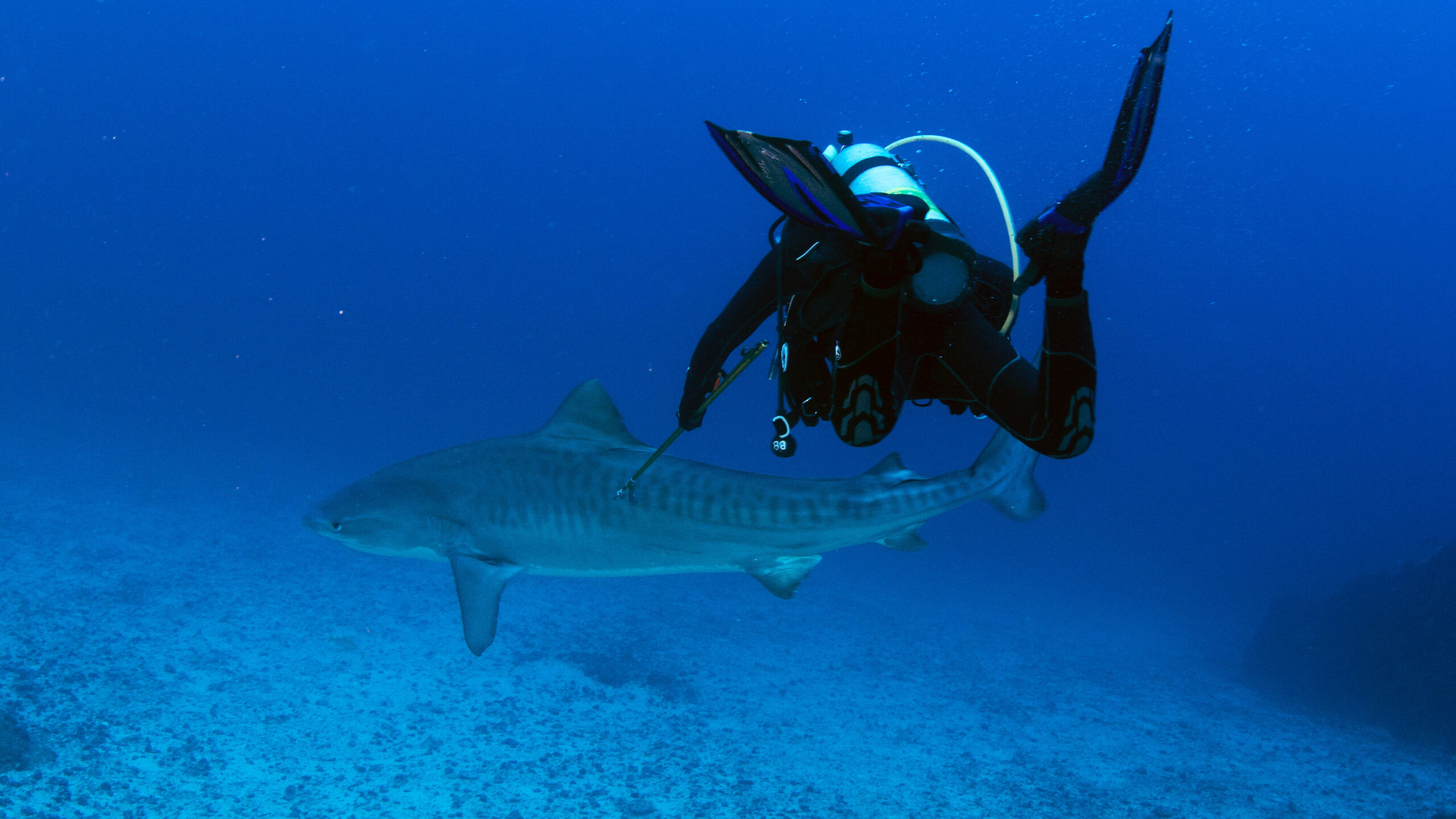 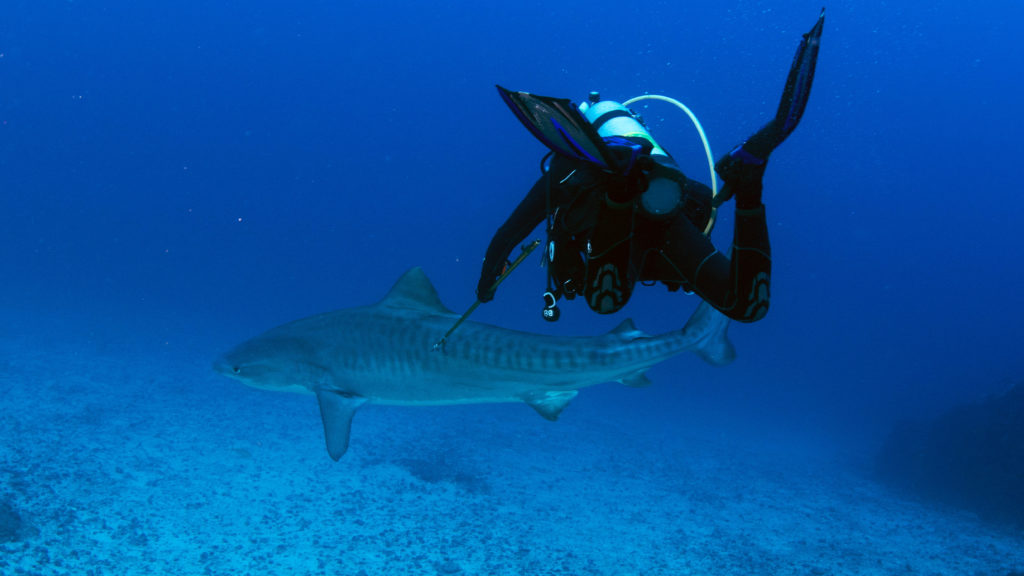 OLEMA – A Bay Area scientist has successfully tagged a shark that is believed to have killed an American scuba diver and seriously injure another in November 2017.

Todd Steiner, founder and executive director of Turtle Island Restoration Network (TIRN) based in Marin County, tagged the 14-foot female tiger shark during one of the organization’s yearly research expeditions to Cocos Island National Park, one of the world’s most premiere and remote dive locations, located 350 miles off the coast of Costa Rica.

Using scuba and a six-foot pole spear, Steiner charged the tiger shark and placed an acoustic transmitter below its dorsal fin in order to monitor its habitat use at Cocos Island National Park. The tag may monitor the shark’s movements for two or more years.

“I love Cocos Island, and dive fees revenue from recreational divers is critically important to sustain the conservation activities at this National Park,” Steiner said. “We need to better understand this shark’s habitat use in order to keep divers and wildlife safe, and acoustic telemetry is one of the best and most reliable tools we can use.”

The tiger shark, nicknamed Lagertha after the women warrior in the History Channel’s “Vikings,” and also nicknamed by others as Victoria, is believed to be the same shark that attacked two divers in November 2017, leaving one dead and one seriously injured. It was the first shark attack at Cocos Island and only the fourth recorded in Costa Rica’s history. While there are no images from the initial attack to compare to, this individual shark is easily recognized by unique scars and spots on its dorsal fin and has shown aggressive behavior to divers, causing dives to be aborted for safety reasons.

“Sometimes a tiger shark will appear curious and will make one close swim-by before continuing on their way,” Steiner said, based on his personal experience on more than 600 dives at Cocos Island. “The 2017 attack is the only confirmed attack despite more than 20,000 recreational divers and hundreds of thousands of dives at Cocos since 1993.”

Steiner, along with a crew of volunteer divers, set off on the research expedition early December in Undersea Hunter’s MV Argo, a 130-foot live-aboard dive vessel. Alfredo Barroso, famed Emmy Award winning underwater cameraman, who was filming the research expedition for an upcoming documentary, said they were in about 60 feet of water when the shark showed up.

“It was showing no fear of the divers and was slowly and continuously circling us, closing its eyes, which is often a sign of a possible imminent attack,” Barroso said, who has logged more than 6,000 dives around the world. “Todd charged the animal and tagged it from about a foot away, causing the shark to swim off and giving us time to get safely back on our skiff.”

Steiner has been conducting studies of sea turtles and sharks at Cocos Island since 2007 in partnership with the Costa Rican based organization The Rescue Center for Endangered Marine Species (CREMA) and its founder Randall Arauz, setting up acoustic listening devices at all major dive sites in the Park. Following the 2017 attack only a few days after it occurred, Turtle Island’s team was the first to dive the site of the attack at the request of the Costa Rica National Park Service, as well as during the time when the site was closed by the Costa Rican National Park Service to recreational divers.

Turtle Island’s studies at Cocos Island focus on highly migratory turtles and sharks, and in collaboration with scientific partners from throughout the region, have uncovered an underwater migratory wildlife superhighway for at least three species of sharks and two species of sea turtle. This superhighway connects Cocos, a part of Costa Rica, and Galapagos, a part of Ecuador. The collaboration of scientists working in the region is called MigraMar, where Steiner is a founding board member and currently serves as secretary.

“Our data has provided the impetus for the creation of a 240,000 square mile marine protected area, known as the Cocos-Galapagos Swimway,” Steiner said. “We are actively working with the governments of Costa Rica and Ecuador, along with several additional partners, to create the first bilateral agreement that will allow endangered species to migrate safely outside the small marine protected areas that surround these two reserves and connect two sovereign nation’s marine National Parks.”

Turtle Island has organized more than 25 expeditions to Cocos Island, utilizing a crew of volunteer citizen-scientist divers, and set off on the most recent research 10-day expedition in early December. In addition to a new understanding of sea turtle and shark migrations throughout the region, the research has provided the basis for better protections for endangered marine wildlife impacted by industrial fishing operations.

Turtle Island Research Expeditions offer some of the most spectacular opportunities to view, photograph, and help research the incredible marine biodiversity of the East Pacific, in an area that was described by Jacques Cousteau as the “most beautiful island in the world.” To participate in an upcoming research expedition with Turtle Island Restoration Network, visit www.seaturtles.org.