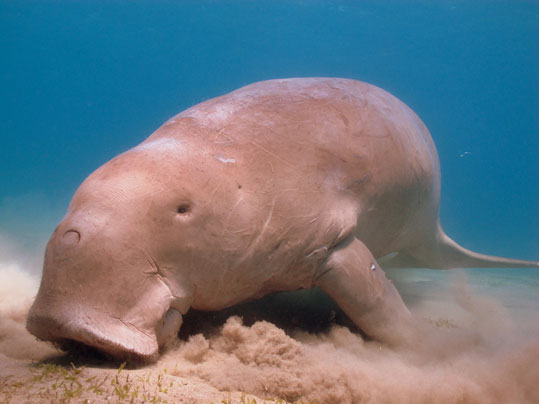 Lawsuit Seeks to Halt Construction of U.S. Military Airstrip in Japan That Would Destroy Habitat of Endangered Okinawa Dugongs

SAN FRANCISCO— Turtle Island Restoration Network along with American and Japanese conservation groups today asked a U.S. federal court to halt construction of a U.S. military airstrip in Okinawa, Japan that would pave over some of the last remaining habitat for endangered Okinawa dugongs, ancient cultural icons for the Okinawan people. The lawsuit, filed in U.S. District Court in San Francisco, is the latest in a long-running controversy over the expansion of a U.S. Marine air base at Okinawa’s Henoko Bay. Preliminary construction on the base began earlier this year.

“If we need to choose between another military airstrip or protecting the critically endangered dugong, Turtle Island sides with the dugong and the host of marine species that will suffer from bulldozing and concreting a coral reef into landing strip,” said Todd Steiner, biologist and executive director of Turtle Island Restoration Network.  Dugongs won’t be the only victim, sea turtles and a host of marine life will suffer.

“Our folktales tell us that gods from Niraikanai [afar] come to our islands riding on the backs of dugongs and the dugongs ensure the abundance of food from the sea,” said Takuma Higashionna, an Okinawan scuba-diving guide who is a plaintiff in the lawsuit. “Today, leaving their feeding trails in the construction site, I believe, our dugongs are warning us that this sea will no longer provide us with such abundance if the base is constructed. The U.S. government must realize that the Okinawa dugong is a treasure for Okinawa and for the world.”Dugongs are gentle marine mammals related to manatees that have long been revered by native Okinawans, even celebrated as “sirens” that bring friendly warnings of tsunamis. The dugong is listed as an object of national cultural significance under Japan’s Law for the Protection of Cultural Properties, the equivalent of the U.S. National Historic Protection Act. Under this act and international law, the United States must take into account the effect of its actions and avoid or mitigate any harm to places or things of cultural significance to another country.

The Japanese Ministry of the Environment has listed dugongs as “critically endangered,” and the animals are also on the U.S. endangered species list. In 1997 it was estimated that there may have been as few as 50 Okinawa dugongs left in the world; more recent surveys have only been able to conclude that at least three dugongs remain in Okinawa. Although the Defense Department acknowledges that this information is “not sufficient,” and despite the precariously low dugong population even under the most conservative estimates, the Defense Department has authorized construction of the new base.

The Nature Conservation Society of Japan reported earlier this month that it had found more than 110 locations around the site of the proposed airstrips where dugongs had fed on seagrass this spring and summer.

“Okinawa dugongs can only live in shallow waters and are at high risk of going extinct. These gentle animals are adored by both locals and tourists. Paving over some of the last places they survive will not only likely be a death sentence for them, it will be a deep cultural loss for the Okinawan people,” said Peter Galvin, director of programs at the Center for Biological Diversity.

Today’s legal filing, which supplements a suit filed in 2003, seeks to require the U.S. Department of Defense to stop construction activities on the new airstrip until it conducts an in-depth analysis aimed at avoiding or mitigating harm the expansion will cause for the Okinawa dugong. In April 2014 the Defense Department concluded that its activities would not harm the dugong, but that conclusion did not consider all possible effects of the new airstrip and ignored important facts. In addition, the department excluded the public, including local dugong experts, from its analysis.

For years many locals have protested and opposed the base-expansion plan for Okinawa, where 20 percent of the island is already occupied by U.S. military.

“Basic respect demands that the United States make every effort not to harm another country’s cultural heritage. U.S. and international law require the same,” said Earthjustice attorney Martin Wagner. “The Defense Department should not allow this project to go forward without making every effort to understand and minimize its effects on the dugong. That means fully understanding the state of the entire Okinawan dugong population, how it depends on the seagrass beds around the proposed airstrip, and how construction and operation of the base might harm it. To ensure that no relevant information is excluded, the process and all related information must be fully open to the public.”

Today’s lawsuit was filed by Earthjustice on behalf of the U.S. organizations  Turtle Island Restoration Network and Center for Biological Diversity; the Japanese organizations Japan Environmental Lawyers Federation and the Save the Dugong Foundation; and three Japanese individuals.