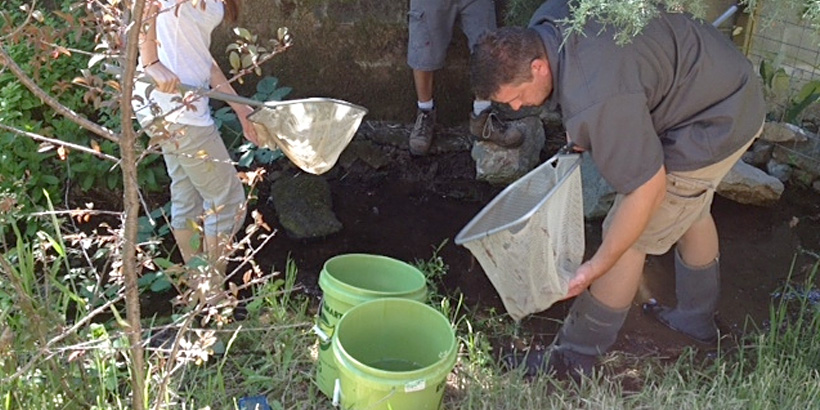 The creeks along the Lagunitas Watershed dry-up in summer, trapping endangered coho salmon and threatened steelhead trout in pools.

On the meager banks of the Barranca Creek near the Marin County town of Lagunitas, a group of researchers armed with nets leapt over brambles and mint shrubs to cross a tiny stream.

In pools hardly knee-high, they thrust their nets toward the murky bottom, scooping up debris and tiny fish. “I caught one!” a female volunteer yelled, at the sight of a miniscule fish flailing amid the mud and twigs.

This operation, which at first glance appeared to be a fishing expedition for the truly desperate, was actually a rescue mission of sorts. In the summer months, the creeks along the Lagunitas Watershed dry-up, trapping endangered coho salmon and threatened steelhead trout in pools.

Since 1999, the Salmon Protection and Watershed Network, or SPAWN, has sent teams of biologists and volunteers into the creeks to pluck the juvenile fish, known as “fry” from certain death in the evaporating pools.

“We’re catching these fish before they die from lack of water,” said Todd Steiner, executive director of SPAWN. “This little stream here in the next few weeks will go completely dry.”

The Lagunitas Watershed represents one of California’s last spawning grounds for endangered coho salmon. Steiner said decades ago, an expedition like this would yield thousands of coho. On Wednesday, the results were comparatively dismal.

“This year we only had about a hundred fish come up and spawn,” he said.

The seasonal Barranca Creek ambles down a gentle hill in Lagunitas, winding past a neighborhood where members of the Grateful Dead once lived. Just up the street, homeowner Lois Hansen allowed the group to enter her property to skim the creek for marooned fish.

“We’ve been saving these little fish ever since I’ve lived here since 1970,” said Hansen. “I’m getting older now so it’s time for the young ones to come and get them.”

The rescue team collected the fish into buckets, with each fish then measured, identified and logged.

“If they’re big and fat, then they’re healthy,” said Steiner. “And if they’re skinny we’ll know there’s problems up here.”

The salmon have become a barometer of ocean conditions, as well as a reflection of winter rainfall levels. Wednesday’s rescue operation turned-up mostly steelhead trout, and hardly any coho. Steiner said the reason is this year’s winter rains didn’t coincide with the salmon’s spawning cycle, making it difficult for the fish to swim up the creek to lay eggs in the place of their birth.

Steiner said the problem was partly nature, and partly due to years of development along the fish critical habitat.

“You can see this house was built just a few feet from the creek,” said Steiner, gesturing toward Hansen’s house. “Those were mistakes that were made hundreds of years ago.”

After netting more than a hundred fish, mostly steelhead, the group of rescuers transported the buckets to a lower stream, flowing wider and more abundantly beneath a thick canopy of trees. A volunteer tilted the plastic bucket into the stream, releasing the darting castaways into a deep, black pool where they quickly vanished.

“It feels great to save a species from certain death,” mused Steiner. “And give them another chance at survival.”

Tell the National Park Service to NOT KILL Tule Elk