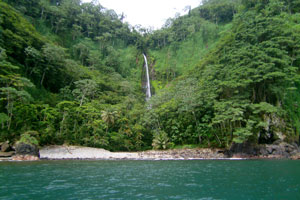 “This study should be awake up call for the Costa Rican Government to step up its ocean conservation places and enforcement to protect Cocos Island Marine National Park , a United Nations Biosphere Reserve, and endangered sharks and sea turtles that depend on this protected area,” said Todd Steiner of Turtle Island Restoration Network, a science-based marine conservation organization that works at Cocos Island. “To do otherwise will destroy Costa Rica’s public trust resources that fuel the nation’s primary economic driver, nature tourism.”

Researchers from the Universities of Victoria, Northern Iowa and Dalhousie studied 21 years of data on shark and ray sighting recorded by a dive guides with the Undersea Hunter Group. Dive guides logs were used as there was no fisheries data or traditional surveys. Data was collected from over 27,527 dives logged between 1993 and 2013 at 17 different dive sites around Cocos Island.

“This is a remarkable dataset that highlights the importance that the tourism industry and citizen science can have in terms of tracking long term population trends,” said Alex Hearn, conservation science director for Turtle Island Restoration Network.

Researchers wanted to learn if Cocos Island National Park “represents a conservation success or merely a paper park.” The results of the study show that eight of 12 commonly observed sharks and rays species have declined in the past two decades. The chance of a diver seeing the Island’s iconic scalloped hammerhead sharks in large numbers has declined. In contrast, the chance of seeing a tiger shark or whale shark has increased. These results highlight the need for better enforcement of the MPA, as well as protected ‘swimways’ that safeguard sharks and rays during their migrations.

“This study shows how oceanic marine protected areas are necessary but not sufficient tools when it comes to protecting top predators. For those sharks that range outside Cocos we need to develop comprehensive conservation tools that include protection measures along their migratory routes,” said Hearn. “In particular, as our tracking studies have shown, there appears to be a significant amount of movement of several shark species between Cocos and Galapagos marine reserves. Bilateral efforts to reduce shark mortality in the region of ocean between the two may go a long way to halting their decline.”

About Cocos Island: The Island, which has been called “the most beautiful Island in the world” by Jacque Cousteau, is a known hotspot hammerhead sharks, Galapagos sharks, tiger sharks, whale sharks, spotted eagle rays, and a diverse range of species. In addition to being a National Park, the Island and its marine zone is a UNESCO World Heritage Site. It is one of the top locations in the world to scuba dive with sharks and rays.

Turtle Island Restoration Network (SeaTurtles.org) works to mobilize people and communities around the world to protect marine wildlife, the oceans and the inland waterways that sustain them. Turtle Island has been studying sharks and sea turtles at Cocos Island since 2009 and leads a series of scientific expeditions each year (learn more here).