Editor’s note: Thank you to Ironman for being so responsive, and letting competitors know to use coral safe sunscreen! Also, thank you Eyes of the Reef network, Hawai’i Wildlife Fund, Surfrider Foundation – Kona, West Hawai’i Fisheries Council and the Kohala Center for their work on this issue.

Each year, thousands of athletes participate in Hawai’i’s Ironman competition. As the 2016 Ironman approaches, Turtle Island Restoration Network is working to draw attention to emerging research on the lethal effects of a common sunscreen ingredient, oxybenzone (benzophenone-3; BP-3), on our treasured coral reef ecosystems.

Last year, Hawai’i’s corals were devastated by a massive and unprecedented coral bleaching event, which resulted in the loss of 50 percent of corals. In response, numerous state and local agencies have been working tirelessly to promote the recovery our coral reef ecosystems. As the thousands of Ironman athletes, family, supporters, and staff visit Hawai’i Island in the coming weeks, we are working with Ironman organizers to support the efforts to promote the use of coral-safe sunscreens. 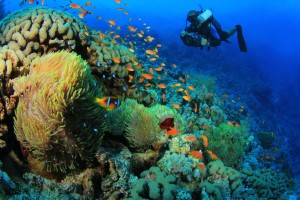 The toxic effects of oxybenzone on coral reefs is devastating. Below is a list of just some of the reasons why Ironman attendees should use coral safe sunscreen:

If you live in or visit an area with coral reefs, please choose a sunscreen that is coral-safe!