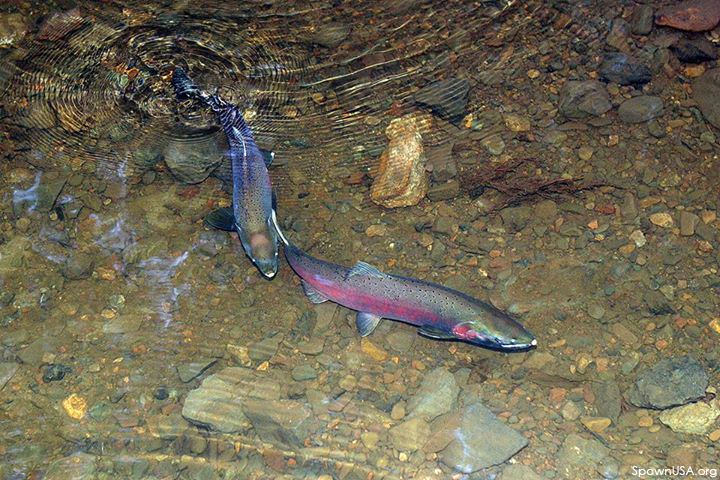 Click here to sign up here for winter Creek Walks to look for spawning coho salmon with naturalists trained by Turtle Island and our Salmon Protection and Watershed Network.

WHAT: Migrating Chinook salmon have entered Lagunitas Creek (through Tomales Bay from the Pacific Ocean) and are now spawning.

Arrange an on-camera interview with one of our wildlife biologists or tour the area with our knowledgeable staff to capture videos and photos of the first salmon run of the season by contacting us.

The sighting of Chinook salmon in the Lagunitas Watershed marks the start of the fall run of the California Coastal Chinook Salmon, which have been listed as ‘threatened’ under the U.S. Endangered Species Act since 1999 according to the California Department of Fish and Wildlife.

The Chinook salmon will run up Lagunitas Creek located in Marin County, California during the months of October, November and December. Their run will be followed by a winter run of endangered coho salmon beginning in late November and continuing until February. The largest remaining population of Central California Coast Coho Salmon occurs in Marin County in the Lagunitas Creek Watershed, but remains critically endangered.

“I decided to walk down to the creek after lunch because it was such a beautiful day.  A few seconds after I approached the water’s edge, I saw a large, dark fish swimming slowly upstream.  It was mottled with dark spots and had a kype, indicating to me that it was a salmon or trout.  It took my breath away to see such a majestic fish in the shallow waters,” said Amanda Stromecki, an intern with SPAWN.

“This Chinook salmon mark the start of the spawners arriving in Lagunitas Creek,” said Preston Brown, watershed biologist with SPAWN. “We hope it will be a good year for spawning Chinook and coho salmon, but the burden is now on the Marin County Board of Supervisors to safeguard these ancient species, and save Marin’s creekside habitat from destructive development.”