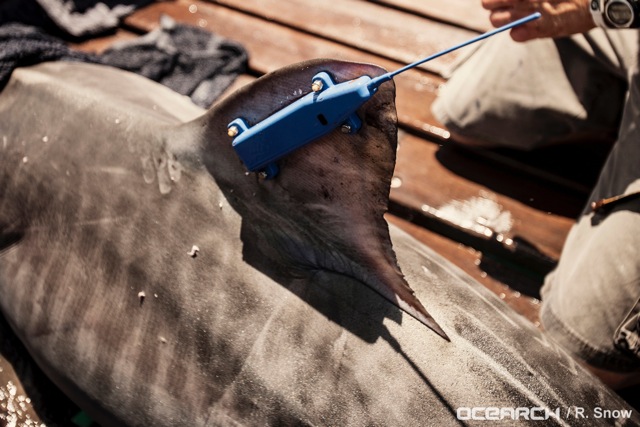 Saving Sharks Starts with Knowing Where they Swim

Where do sharks go? This basic question is one that is rarely considered when creating protected ocean or marine reserves, yet it is one of the most critical ones to conservationists working to protect sharks in the Eastern Tropical Pacific.  Turtle Island Restoration Network in partnership with OCEARCH, the Galapagos National Park Service and the Charles Darwin Foundation are beginning to glean insights into this important question from tracking the movements of more than 60 fish of a variety of species, from the top predator tiger sharks, down to skipjack tuna and rainbow runners in the Galapagos Marine Reserve.

The aim of this study is to understand how open water species, like sharks, move at oceanic islands and between marine protected areas using underwater acoustic receivers (which can detect small tags placed inside sharks and other fish) and satellite tags on sharks.

Thus far expedition shark research has focused on female hammerhead, tiger, silky and blacktip sharks, and shed insight on to different species movements. One tagged five-foot female hammerhead shark named Nemo (because of her fin deformity) was tagged at Mosquera Island in the Galapagos and traveled west over 585 miles west into open ocean.  A tiger shark named Emma (after Charles Darwin’s wife) was tagged in the Itabaca Channel on the North Coast of Santa Cruz Island in the Galapagos. Since then she has traveled over 2,800 miles to the coast of Colombia. It is not yet certain why Emma has traveled so far and it is possible that a fishing vessel may have caught her, so we are closely monitoring her ‘pings.’ Check www.ocearch.org or get the app to find out where our sharks have been and what they are doing. 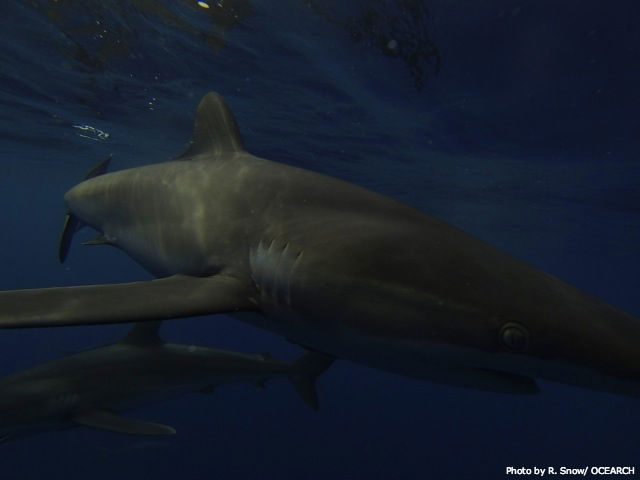 Currently, the Galapagos Marine Reserve in the Eastern Tropical Pacific covers an area of over 53 square miles and includes a 46 mile belt of protected waters surrounding a baseline, which joins the farthest points of each of the 13 major islands.

The reserve is multi-use and allows certain types of small-scale, local fishing including some experimental longling vessels. Longlines are deadly fishing lines with hundreds of baited hooks that can accidentally catch non-target marine life like sharks and sea turtles.

The results of our research will help determine what type of further fishing restrictions and protections are needed to safeguard sharks (and the wide range of species that swim alongside them) in the region. The long-term hope is that this much needed research will spur the creation of an Eastern Tropical Pacific protected shark swimway to shelter these oft misunderstood species as they journey between feeding and birthing grounds.