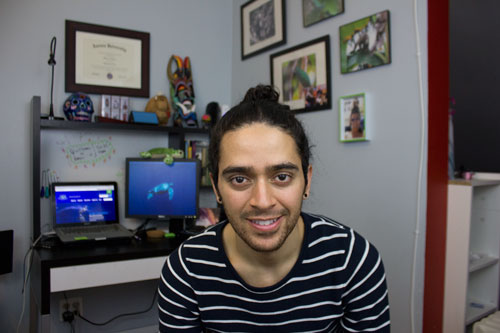 Hi everyone, my name is Diego and I volunteer remotely for Turtle Island Restoration Network.

I first gained deep enthusiasm for conservation after swimming with dolphins at a resort during a vacation in Mexico. Being in the water and interacting with such intelligent non-human creatures changed my life to the point that when I got home from the trip I began poring over articles and studies about dolphin interactions with humans, and found that the origin of these animal shows and encounters often has a dark side: overall cruelty, breaking up of pods, capture and even killing of dolphins.

This led me to want to learn more about the plight of marine animals, which often remains unseen by the general public.

Consequently, a year later, I took a trip as a volunteer for a leatherback sea turtle project in Costa Rica. As volunteers, some of the work included doing night patrols in search of sea turtles eggs that we could take back into our hatchery to safeguard from poachers and predators. During one of these night patrols, as I laid prostrate on the sand collecting the eggs being laid in front of me by a 5.2 ft long leatherback seaturtle I realized that there was nothing else in the world I would rather do. This was one of the most pivotal moments in my life, and it opened my eyes to the struggle of marine species, such as sea turtles, and the need to protect them.

However, living in a large midwestern city away from the ocean I initially thought involvement would be rather difficult.

Nevertheless, during the trip in Costa Rica, I served as interpreter between the biologists, program coordinators, and other non-Spanish speaking volunteers and the locals. As a result, the biologist who led the expedition advised me to look at organizations such as Turtle Island and offer help with administrative duties or, being bilingual, to offer translation and interpretation assistance once I was back home in the U.S. Turtle Island took me in as a volunteer!  Fast forward to today: I’ve now been a volunteer for about two years. I also volunteer at the Shedd Aquarium in Chicago, got certified as a scuba diver, and am working towards a M.A. degree in Biology.

My involvement with Turtle Island consists of translating documents such as reports, studies, press releases, memos (and on occasion travel itineraries and country profiles) as necessary from Spanish to English and vice versa.

More than just a literal rendering, I approach it as an exercise of not only translating documents, but also ensuring that the message is conveyed correctly to the intended audience.

And there’s some occupational quirks as well; sometimes it’s difficult to find the generic word for certain terms, so the use of a dictionary, Google, and scientific names can be extremely handy (For example, almost every spanish-speaking country has a different name for “leatherbacks”).

But it’s because of this that I have also learned a lot and I’m grateful for that.

Even though I live in Chicago, I do all I can to not let distance prevent me from being involved in efforts for the protection of marine species or in conservation initiatives in general such as those led by Turtle Island.

I sincerely believe that regardless of the part you play, whether it’s doing science research, translating documents or even just keeping up with the Turtle Island blog and being informed, it is imperative to get involved, to take some sort of action, which ultimately will have a positive impact on the bigger cause.

There is no doubt that conservation is an intricate aspect of our society because it is intertwined with economics, politics, health, culture, and leisure. For this reason it can only be successful with the help of individuals from distinct backgrounds and with different skills working towards the same goal: to protect those who don’t have a voice and to ensure the ongoing sustainable relationship between people and the environment.

I am inspired by the hope that in the not-so-distant future, industries of all kinds will uphold the principle that conservation, and believe that sustainability should be a priority because our future as a society truly depends on it.

I am also inspired by the opportunity that my generation faces: We have enjoyed decades of unconcerned overuse of natural resources, and now have an opportunity to learn from it, educate others, break bad habits, and transition into a sustainable society.

But motivation does not have to be so intricate or abstract.

I would like to invite anyone who reads this to find a simple source of inspiration that motivates them to learn more about conservation and take action.

For example, if you appreciate beach vacations, you could volunteer to participate in beach cleanups.

Lastly, I recommend the book Ishmael: An Adventure of the Mind and Spirit. Thanks for reading!