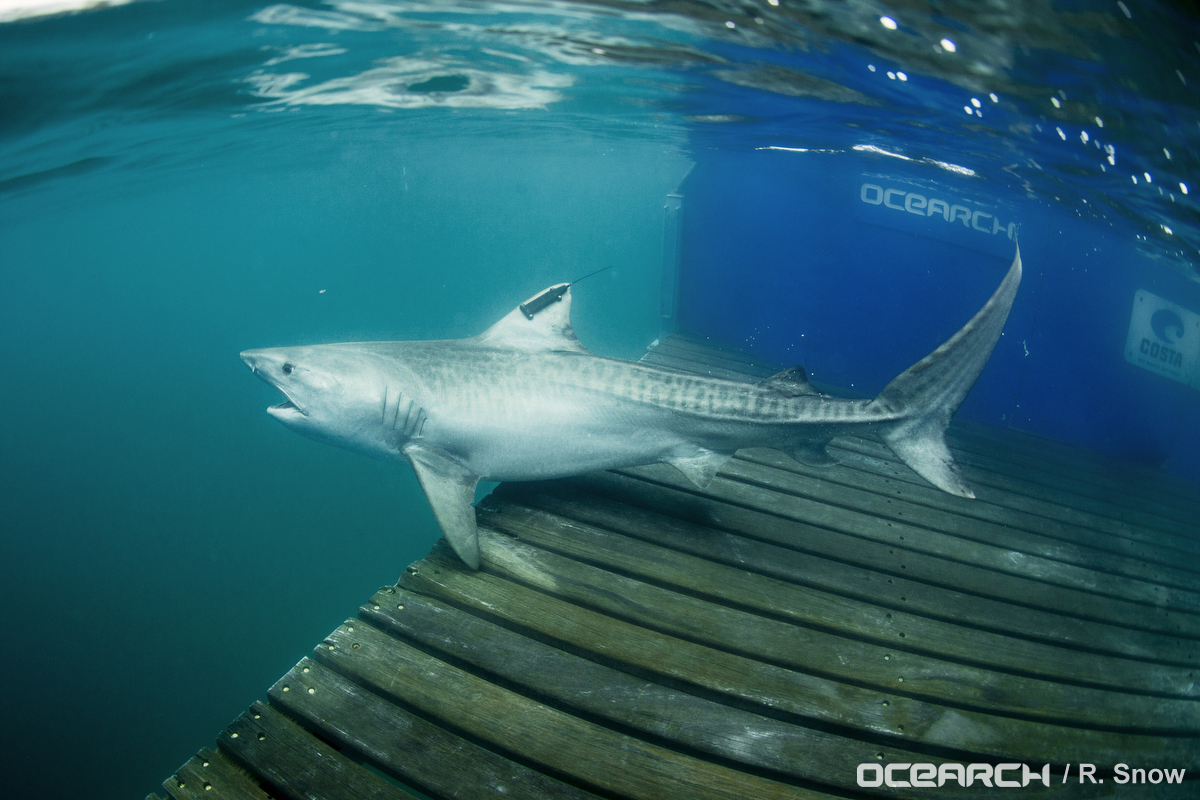 Scientists uncovered a new example of migratory movements between Galapagos Marine Reserve and Cocos Island National Park on a research trip this year, supporting global efforts to improve the conservation of migratory marine species. The research trip was supported by philanthropist and ocean advocate, Dona Bertarelli, and her family. The discovery is featured in a film by Sails of Change & Only One Collective which urges viewers to sign a petition calling on the governments of Ecuador, Costa Rica, Colombia, and Panama to establish the world’s first multinational network of marine protected areas.

A female tiger shark – tagged on an expedition led by non-profit organization OCEARCH with MigraMar, Galapagos National Park Directorate and Charles Darwin Foundation scientists in Ecuador’s Galapagos Islands seven years ago – surfaced at Costa Rica’s Cocos Island in February, almost 700 kilometers to the northwest. This is the first time a tiger shark has been recorded moving between the two marine protected areas. “It has become clear that the previous target of protecting 10% of the world’s ocean is simply not enough, and that there needs to be a more ambitious and effective goal to protect at least 30% by 2030” said Dona Bertarelli. She continued, “The information brought to us by this tiger shark adds to the growing body of science that can inform countries deciding where protections need to be placed.” Ecuador and Costa Rica are both members of the Global Ocean Alliance, which calls for 30% of the ocean to be protected by 2030.

The tiger shark joins a growing list of species that have been documented moving between the Galapagos Marine Reserve and Cocos Island National Park along a marine superhighway known as the Cocos-Galapagos Swimway. Other species include green and leatherback turtles, as well as hammerhead, silky and Galapagos sharks. In late 2020 a whale shark was also tracked to Cocos after being fitted with a satellite tag in Galapagos.

Scientists of the MigraMar network and their partners have been studying sharks, sea turtles and other large marine species in this region for over a decade by placing satellite and ultrasonic tags on individual species to track their movements. Ultrasonic tags emit a high frequency signal, which is unique to each tag. This signal is recorded by an array of underwater listening stations when the tagged animal comes within range (200 m). Data downloaded from receivers can be shared through agreements among users globally through the Ocean Tracking Network.

“At Cocos Island we have an array of seven receivers, which has allowed us to really understand how different species interact and utilize the coastal waters around the island,” said Randall Arauz of Fins Attached, who initiated this research project in Cocos Island in 2005.

“Many endangered marine species are migratory, and become vulnerable to fishing gear as soon as they cross outside the marine reserve,” said Dr. Alex Hearn of MigraMar and Universidad San Francisco de Quito-Galápagos Science Center. “In this case, many of the movements appear to follow the underwater chain of seamounts that link the two reserves – we call it a swimway.” While on the research trip in early 2021, Dr. Hearn was undertaking a routine download and maintenance of the receivers at Cocos Island. “I tend to scan through the tag IDs as they come in, because it’s always exciting to see reports of animals that we tagged years ago. That evening, I noticed a familiar tag code, and after checking in our database we realized it was a tiger shark that we’d tagged in Galapagos in January 2014. It was a big moment – the first example of a tiger shark moving between the two marine protected areas.”

During the 2014 OCEARH expedition, four tiger sharks were tagged for the very first time in Galapagos. One of them, a 2.74 m female nicknamed Yolanda, remained in Galapagos for almost four years, but had last been detected in October 2017. However, the data recently obtained from the Cocos receiver array showed that she visited the island for a period of three weeks in November 2020. “This shows, yet again, the high degree of biological connectivity linking the two protected areas,” declared Gina Cuza Jones, the regional director for the Cocos Island Marine Conservation Area. Harry Reyes, head of marine research at the Galapagos National Park Directorate, plays an active role in field expeditions within the reserve, “The partnership between government agencies and research groups across the region is key to understanding the movements of these highly mobile species and building effective conservation strategies.”

“This tiger shark marks the sixth highly migratory species shown to use the Cocos–Galapagos Swimway,” said Todd Steiner, executive director of Turtle Island Restoration and Cocos-Galapagos Hope Spot Champion. “We now know that in addition to endangered leatherback and green turtles, at least four species of endangered sharks also use this marine corridor, and we expect MigraMar researchers will continue to document even more species in the years to come. We urge the governments of Costa Rica and Ecuador to make history by creating the first bi-lateral marine protected area connecting two UNESCO World Heritage Sites.”

“OCEARCH/MigraMar tiger shark tracking data was used to define the boundary of the Revillagigedo Marine Reserve, the largest marine park in North America, off the Pacific Coast of Mexico. We hope Ecuador and Costa Rica leverage this information as effectively as Mexico. It’s not logical to protect these animals around the Galapagos and Cocos islands and leave them vulnerable as they travel between islands. The Cocos-Galapagos Swimway is a step forward in protecting these two World Heritage Sites. OCEARCH was thrilled to be a part of this collaboration. It is an excellent example of different NGOs, sustainably oriented companies and philanthropists coming together for our planet and future,” stated Chris Fischer, OCEARCH Founder and Expedition Leader.

Inspired by the beauty of nature and its biodiversity, Sails of Change is a communications platform which shines a light on the importance of ensuring a sustainable balance between nature and people. The Sails of Change founders, Yann Guichard, Dona Bertarelli and her children, have a particularly deep connection to the ocean and are passionate about raising awareness about the protection and restoration of nature, sharing ideas and information, and working to achieve meaningful change now and for future generations. www.sailsofchange.org

The Galapagos Science Center (GSC), located in Puerto Baquerizo Moreno in San Cristóbal-Galapagos, is a joint initiative between the San Francisco de Quito University (USFQ) and the University of North Carolina at Chapel Hill (UNC) created in 2011. The GSC is a hub to coordinate scientific research projects between local, national, and international scientists to benefit the Galapagos Islands and the world of science. The GSC aims at identifying the proper balance between the natural environment and the people who live in and visit the Galapagos. This work requires scientists from different disciplines. In this sense, the GSC houses in more than 13 research areas based on its three fundamental axes: interdisciplinary scientific research, education through science, and community outreach. www.galapagosscience.org

MigraMar was founded in 2006 as a network of scientists dedicated to research and conservation of migratory marine species in the Eastern Pacific. Their mission is to provide the necessary technical advice for the conservation of the migratory marine species in the Eastern Pacific. The network is made up of 22 researchers belonging to universities, government agencies and non-profit organizations in different parts of the American continent. MigraMar provides scientific information regarding migratory patterns of marine species, evaluates and forecasts the state of populations, in order to increase knowledge about these, understand the role they play in the ecosystem, and how best to preserve them. www.migramar.org

OCEARCH is a global non-profit organization conducting unprecedented research on our ocean’s giants in order to help scientists collect previously unattainable data in the ocean. Our mission is to accelerate the ocean’s return to balance and abundance through fearless innovations in critical scientific research, education, outreach, and policy using unique collaborations of individuals and organizations in the U.S and abroad. OCEARCH is recognized as a world leader in generating scientific data related to tracking (telemetry), and biological studies of keystone marine species such as great white sharks, tiger sharks, and more. OCEARCH provides a free open-sourced Shark Tracking service and app that allows scientists, educators, and fans alike to learn about the never before documented movements of our ocean’s animals. Learn more at OCEARCH.org. You can view the video of Tiger Shark Yolanda being tagged here and see her past tracks on the OCEARCH Global Shark Tracker.

Fins Attached Marine Research and Conservation believes in the preservation of our world’s precious resources and that through the protection of the oceans apex predators, marine ecosystem balance can be maintained for the benefit of all living things on earth. The health of any ecosystem is controlled largely by its apex predators. So, while our work aims to impact the marine ecosystem as a whole, much of our research is focused on the apex predators of the marine environment, which are sharks. Our organization is comprised of scientists, companies, organizations, and people concerned with the health of the world’s oceans. The scientists that represent Fins Attached range in backgrounds from divers to Ph.D marine biologists. https://finsattached.org

The Charles Darwin Foundation for the Galapagos Islands (CDF) is an international non-profit organization dedicated to scientific research. CDF has carried out its mission in the Galapagos since 1959, thanks to an agreement with the Government of Ecuador and with the mandate to pursue and maintain collaborations with government agencies by providing scientific knowledge and technical assistance to promote and secure conservation of Galapagos. http://www.darwinfoundation.org

The Ocean Tracking Network (OTN) is a global aquatic research, data management and partnership platform headquartered at Dalhousie University in Halifax, Nova Scotia, Canada. OTN’s mission is to inform the stewardship and sustainable management of aquatic animals by providing knowledge on their movements, habitats, and survival in the face of changing global environments. Since 2008, OTN has been deploying state-of-the-art ocean monitoring equipment and marine autonomous vehicles (gliders) in key ocean locations and inland waters around the world. OTN’s technical capabilities expanded in 2020 with the addition of remotely operated vehicles (ROVs) and side scan sonar systems. Researchers around the world are using OTN’s global infrastructure and analytical tools to document the movements and survival of aquatic animals in the context of changing ocean and freshwater environments. Knowledge generated through OTN collaborations is used provincially, federally and internationally to help guide the management of valued aquatic species and the sustainable use of ocean and freshwater resources. https://oceantrackingnetwork.org

Founded by wildlife photographers Cristina Mittermeier, Paul Nicklen, and Shawn Heinrichs, The Only One Collective brings together a diverse, worldwide community of activists and experts to fuel action on ocean conservation. Our Collective includes SeaLegacy, an expedition and storytelling studio that creates powerful visual content to move people from apathy to action, and Only.One, a digital action platform built to support and uplift the ocean conservation community while driving action to achieve measurable, sustainable and equitable returns for people and the ocean.