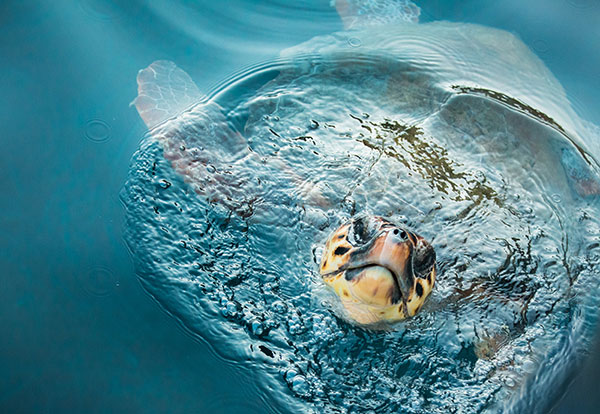 By Turtle Island Restoration NetworkMay 19, 2016Got Mercury?, Resources for the Media, Sea Turtles
No Comments

“We are glad to see that Pacific loggerhead turtles won’t have to face the gauntlet of deadly driftnets during El Nino conditions,” said Todd Steiner, a biologist and executive director of Turtle Island Restoration Network. “But marine life won’t be safe until the barbaric driftnet fishery that also kills dolphins, whales and a myriad of marine life, is ended off the entire California coast.”

In a letter to NOAA Fisheries, the conservation groups request a June 1 closure of the Pacific Loggerhead Conservation Area, and public notice to that effect. The groups cite several sources of confirmed El Niño conditions that unequivocally demonstrate that closure of the more than 25,000 square mile PLCA is required. When El Niño is occurring or forecasted, the Pacific Loggerhead Conservation Area (California ocean waters east of 120 degrees latitude) is, by law, closed to drift gillnet fishing during June, July, and August and the public must be notified. This will be the third consecutive year El Niño conditions have caused the loggerhead closure.

“During El Niño years, waters off California provide a buffet for endangered loggerheads and other imperiled animals like bluefin tuna. It’s important that fishing nets don’t crash the red crab party, and world travelers like sea turtles and tuna can refuel before long migrations,” said Catherine Kilduff of the Center for Biological Diversity. “Protecting California’s ocean diversity is a down payment for sustainable fisheries, even if it requires a short-term closure.”

Drift gillnets that target swordfish and thresher sharks in ocean waters off California create a dangerously invisible curtain that entangles whales, dolphins, seals, sea lions, sea turtles, other species of sharks, and other ecologically and economically important fish. Once trapped in these nets, most animals eventually drown. This fishery ends up tossing back into the ocean more wildlife than it keeps, discarding on average 64 percent of the unintended catch overboard.

“There’s no question that conditions call for this closure,” said Mariel Combs, Pacific Counsel with Oceana. “The agency must protect loggerhead sea turtles from California drift gillnets to help recover this endangered species.”

The Pacific Loggerhead Conservation Area was established in 2000 to prevent the drift gillnet fishery from jeopardizing the loggerhead sea turtle’s existence. The swordfish drift gillnet fishery operates off California May 1 to January 31, but over 90 percent of the fishing generally occurs after mid-August.

Oceana is the largest international advocacy organization focused solely on ocean conservation. We run science-based campaigns and seek to win policy victories that can restore ocean biodiversity and ensure that the oceans are abundant and can feed hundreds of millions of people. Oceana victories have already helped to create policies that could increase fish populations in its countries by as much as 40 percent and that have protected more than 1 million square miles of ocean. We have campaign offices in the countries that control close to 40 percent of the world’s wild fish catch, including in North, South and Central America, Asia, and Europe. To learn more, please visit www.oceana.org.

The Center for Biological Diversity is a national, nonprofit conservation organization with more than          1 million members and online activists dedicated to the protection of endangered species and wild places. http://www.biologicaldiversity.org/