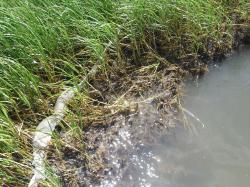 Barataria Bay in southern Louisiana on a sunny morning is a beautiful sight. I had visited this huge embayment on July 9th, and was eager to see how conditions had changed in the oil soaked wetlands. I was joined by Gulf Sea Turtle Action Team and Oceanic Defense member Deb Castellena, Sea Shepherd volunteer Brock Cahill, and expert local marine biologists and boat captains. We set out to document the current conditions and check on several “Bio Booms” deployed to demonstrate new technology available to passively capture and remove subsurface oil from sensitive wetlands.

I hoped to see that BP had made significant strides cleaning the marshes, and was sorely disappointed. Once again, we witnessed displaced booms encroaching on endangered seabirds, weathered oil seeping from the marsh grass, and thick oil covering the frontal fringe of marsh islands.

Approaching one particular cove, I was hoping to see that the dark colors were natural muds in poor lighting, but as we grew closer, the bright reflections off the dead, black vegetation confirmed that oil still covered this entire area. The putrid smell of oil was obvious.

While some areas were a frightening black, a dull brownish red covered the leading edge of vegetation along this entire marsh island. We gingerly approached the grass, bent down and stuck to itself, and I reached out to inspect it. Oil coated my fingers.

One very positive experience was witnessing the “Bio Booms” placed near oiled areas. They consist of thousands of “hairs” hanging below an absorbent boom. The hairs creating a huge surface area that bacteria cling to, creating a massive zone from natural filtration and biodegradation process. They had all soaked up quite a bit of oil, and hermit crabs had taken refuge inside the hairs.