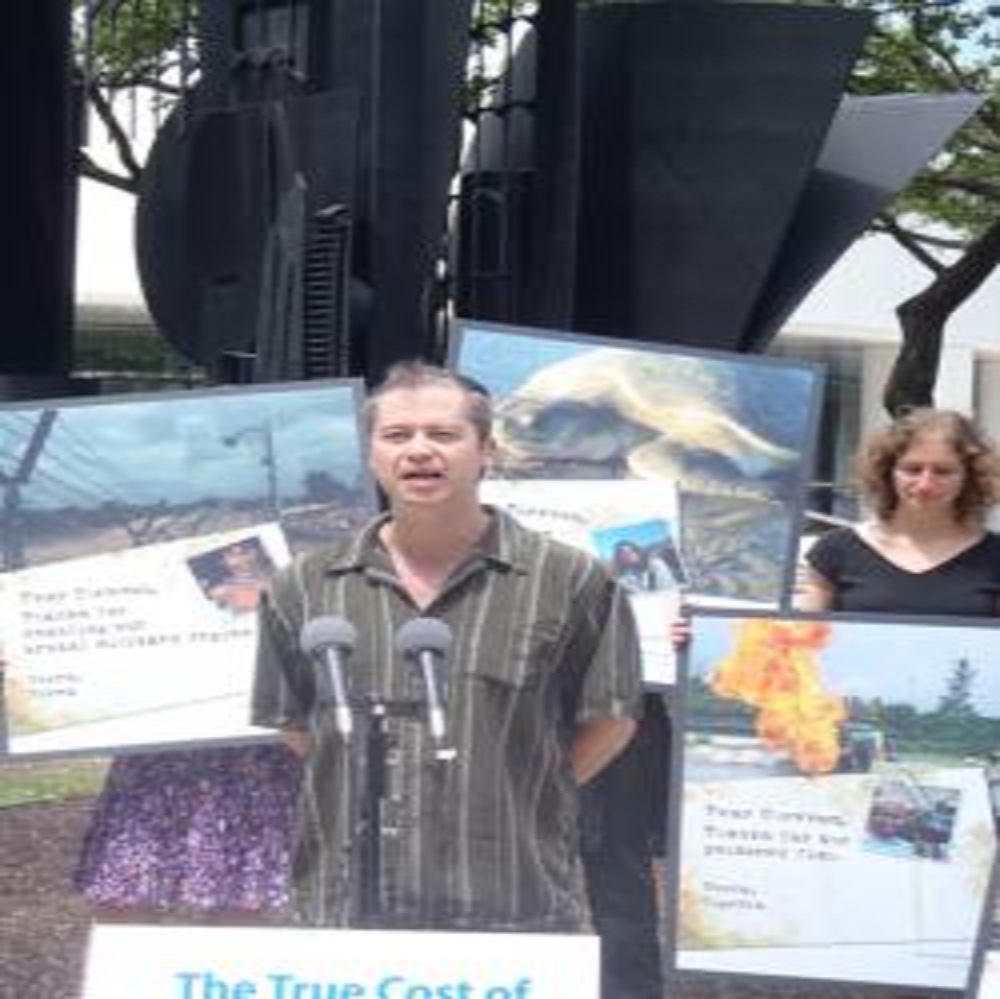 They traveled two days to Houston to confront Chevron about plans to build a natural gas plant in wild and sacred lands in Northwestern Australia’s Kimberley region. But they were locked out along with other human rights and environmental advocates from around the world being harmed by Chevron’s global oil and gas operations.
Josh Coates of the Wilderness Society and Aboriginal activist Neil McKenzie will be in the San Francisco Bay Area for two days to talk about their country, threats from Big Oil and the Montara spill that oiled waters off their Australia coast earlier this year. See Josh, Neil and Teri Shore (in turtle costume) from TIRN at the Chevron protest Houston on YouTube. Neil and Josh need international support for their grassroots battle against Big Oil.
Join us for a Brown Bag Lunch in San Francisco or Berkeley, or an evening gathering in Point Reyes Station. They are also available for one-on-one meetings and media interviews. Seemore  videos from the Chevron actions in Houston.

Tuesday, June 1, Noon to 2 pm, Rainforest Action Network, 221 Pine Street, 5th Floor, San Francisco. Bring your own Brownbag lunch, light refreshments.
Tuesday, June 1, 6:30 to 9 pm, Dance Palace Church Space, Point Reyes Station (West Marin). [Donations $5 to $15 accepted, no one turned away!] Light refreshments.
Wednesday, June 2, Noon to 1:30 pm, Earth Island Institute, The David Brower Center, 2150 Allston Way, Berkeley. Space limited to 25! Bring your own Brownbag lunch, light refreshments. Please RSVP for this event with Teri Shore, tshore@tirn.net (preferred) or call 415-663-8590, ext. 104
Aboriginal activist Neil McKenzie from Australia’s remote Kimberley and campaigner Josh Coates from the Wilderness Society of Western Australia are in the San Francisco Bay Area for a short visit to share stories about the sea and land country under threat from the fossil fuel frenzy in Northwest Australia. They need international support to protect ancient indigenous sites and songlines, humpback calving and sea turtle nesting grounds, and human communities from massive natural gas projects planned by Chevron, BP, Shell, Exxon and Woodside Petroleum.
The Activists: Neil Patrick McKenzie is a Yawuru Traditional Owner and Law Boss – Cultural Custodian of Yawuru and Jabirr Jabirr country who is an environmentalist, conservationist and aboriginal activist. He has worked as a cultural tour guide for 25 years and is a founding member of Save the Kimberley. He is a guide at EcoBeach in Western Australia where TIRN is sponsoring the Meet the Flatback EcoTour.
Josh Coates has been involved with The Wilderness Society of Western Australia for five years, working with Indigenous people in the North of Australia to advocate for landscape-scale conservation action to protect the Kimberley region.
Teri Shore is Program Director for Turtle Island Restoration Network in Forest Knolls, CA. She has traveled extensively in Western Australia and is working with activists there to help protect pristine sea and land country from major new oil and gas projects. She was an author and co-sponsor of the Chevron Alternative Annual Report released before the Chevron Shareholder Meeting . She organized activists to rally for the protection of sea turtles and marine life from oil and gas projects.
The country: The Kimberley region of Northwestern Australia is one of the world’s great natural and indigenous cultural regions.  Its vast savannah landscapes, wild rivers, extensive wetlands, spectacular coast and rich marine environments provide a multitude of habitats that are home to an extraordinary diversity of species.  Neil and Josh are visiting the Bay Area for two days in an effort to grow the international grassroots campaign to stop natural gas expansion.