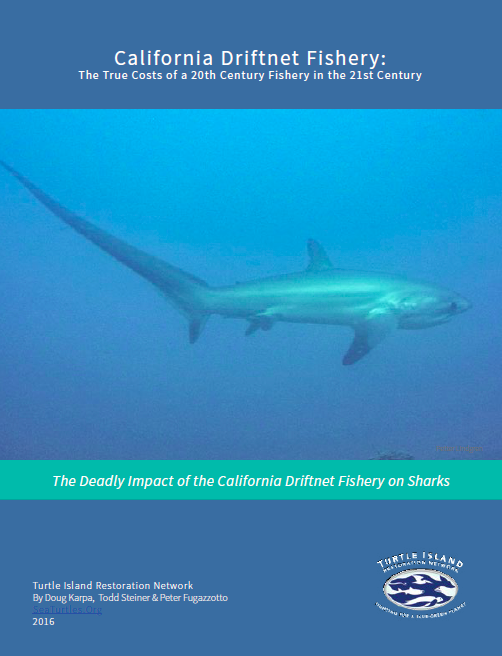 By Turtle Island Restoration NetworkJune 27, 2016Resources for the Media, Sharks
No Comments

“Our report shows that California’s driftnet fishery is killing sharks at an astounding rate,” said Todd Steiner, executive director of Turtle Island Restoration Network (SeaTurtles.Org), which has worked for over a decade to reduce wildlife deaths in this and other fisheries. “The fishery should be held to a higher standard,” he added.

The driftnet fishery in California consists of roughly 20 fishing vessels. The vessels set out nets the size of the Golden Gate Bridge to float overnight and indiscriminately catch whatever swims into their nets, including sharks. In a ten-year period ending in 2014, the California driftnet fishery caught a staggering 26,217 sharks – more than 2,600 every year. This includes thousands of blue sharks, shortfin mako sharks, and common thresher sharks each year.

Many of these sharks killed are considered “bycatch” (a fisheries term for unwanted marine wildlife caught alongside target species of fish). For instance, the driftnet fishery 8,186 blue sharks we caught, and a mere six were retained, the rest discarded. In the 2013-4 fishing season, 72 percent of the blue shark catch was tossed overboard dead, while the rest may or may not have survived after release.

“We hope that while everyone enjoys shark week, they also take a moment to learn the truth about the California driftnet fishery and the story of how they kill thousands of sharks off our coast each year,” said Joanna Nasar, Communications Director for Turtle Island.

Sharks are both key apex predators and long-lived, slowly reproducing fish. For this reason, the high mortality rates of sharks from the driftnet fishery increases their extinction risk, and could impact the long-term overall ecosystem health of California’s oceans.

Turtle Island’s series of reports on the fishery show that it is time for California to phase out this costly, outdated, and ineffective method of fishing that negatively impacts marine wildlife.