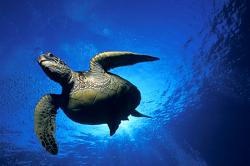 urtle Island Restoration Network has joined the international call to spare the captive-bred green sea turtles that are being held at the University of British Columbia for research purposes. While these seven sea turtles are not part of the wild population and will not make a difference to the survival of the species, the university should do all it can to ensure that they live out their lives in the best way possible.

Our wish is that people around the world would be as outraged about the plan to kill these poor sea turtles as for the tens of thousands of wild sea turtles killed in the U.S. every year in fisheries for shrimp, swordfish and tuna! By not eating this fish and telling others about the harm, people can make a real difference in protecting sea turtles from extinction!

We sent a letter today to the president of the university. Download the letter here or read the text below.

Office of the President
The University of British Columbia
6328 Memorial Road
Vancouver, BC V6T 1Z2 Canada

Turtle Island Restoration Network is writing to urge you to immediately cease invasive experimentation on the seven remaining endangered green sea turtles housed at the University of British Columbia and to allow for a team of independent veterinarians to assess the health of the turtles to determine if the animals can be placed in a sanctuary or other protective facility. If an assessment shows the animals can be moved to such a facility where they can live out their remaining days, we request UBC move forward with the rehousing of the turtles as quickly as possible.

Turtle Island Restoration Network is a nonprofit organization based in California that empowers individuals and communities throughout the world to protect marine wildlife.

As you may be aware, all seven species of sea turtles are at high risk of extinction. Listed as endangered by the International Union for Conservation of Nature and Natural Resources, sea turtles face a host of threats. Those threats include: pollution, especially from oil spills, beach front development, ingestion of marine debris, such as plastic bags, the illegal turtle shell trade, incidental capture in fishing nets, and turtle egg and meat consumption. In addition, artificial lighting along beaches often discourages female turtles from nesting and disorients hatchlings who may mistakenly wander inland, exposing them to predation.

At a time when the international community is undertaking efforts to protect and restore sea turtle populations, it makes little sense for an educational institution of UBC’s esteem to kill members of an imperiled species. By permitting a team of independent veterinarians to evaluate the condition of the seven turtles and, if appropriate, placing the animals in a sanctuary, UBC would be showing the world it is committed to conserving one of the planet’s most vulnerable species.

To our understanding, the University of British Columbia conducts extensive research on a variety of animals. Much of this research is funded by the public through taxpayer dollars, student fees, alumni gifts, and private donations. UBC promotes critical thinking, debate, transparency, and freedom of speech; however, the university has been less than forthcoming about its research on animals.

The public has the right to know about such research being conducted. Information about UBC’s animal research and decisions by its Animal Care Committee should be made widely available. Information, data, and reports about animal research in the United States are posted at website databases through the National Institutes of Health and the US Department of Agriculture. With that in mind, I urge UBC to post the following information online:
Assessment reports of UBC by the Canadian Council on Animal Care from 2000-2009, including records of non-compliance and violations issued by the CCAC to UBC, as well as UBC’s responses to those assessment reports
Veterinary care and necropsy reports on animals at UBC for 2000-2009
Data on the number of animals used annually in research, teaching, and testing at UBC for 2000-2009. Data should include numbers of animals used by species, category of invasiveness, and purpose of use.
Copies of animal use protocols by UBC animal researchers and instructors for 2000-2009
Photos, videos, and other recordings of experiments conducted on animals by UBC researchers and instructors for 2000-2009

Finally, we urge UBC to pursue alternatives to research on animals as other universities have done.

I look forward to your response. Thank you.