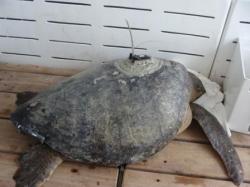 More diving, more turtles!  We are now up to eight green turtles captured from four different dives sites around the island, though most are from Manuelita Garden, a protected shallow coral reef area.  We have replaced our last “night dive with a 4th afternoon dive in Manuelita Garden, where we find turtles resting at 40-60 feet along the coral/sand margins.  They appear curious of us and it is easy to capture them. The hard part of course is getting them (and ourselves) to the surface safely. We have developed a two-person method where one person grabs the turtle and directs him upward and a second person grabs the first diver, deflates his/her BC (buoyancy compensator) and controls ascent time and speed to the surface, where the turtle is passed up to someone in the skiff.

Once aboard the turtles are measured, weighed and tagged with permanent flipper tags and a small tissue sample is taken for genetic analysis.  Some turtles also get one of the four satellite tags and/or nine acoustical tags we have with us.  Satellite tagging involves an additional step of cleaning and drying the surface of the plastron (top shell) and gluing the tag onto the turtle with special epoxy.  Acoustical tags are attached by drilling tiny holes at the margin of the carapace, and fastening the tag with zip ties.  With this latest batch of turtles, we have three turtles outfitted with satellite transmitters and six with acoustical tags.  We are saving our last satellite tag for a hawksbill turtle if we are lucky enough to find one!