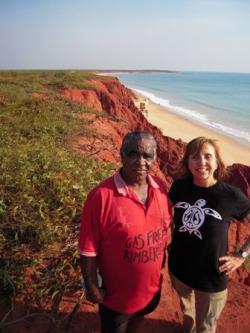 Australian flatbacks will soon start nesting on the white sand beaches along the red rock coast of the Kimberley “where the sun goes down.” Last season, a rare hybrid hawksbill was spotted returning to the sea at Walmadan  (James Price Point) north of Broome in Northwest Australia. This landscape also contains cultural “songlines” important to the Aboriginal people there, and is one of the few pristine landscapes remaining on the continent.  Yet here is where oil companies want to build a massive natural gas processing plant.

Over the past four years, I’ve traveled several times to Northwest Australia to engage in the campaign to protect wild and sacred country in the Kimberley bioregion from devastation by a massive natural gas facility.  I returned in September of this year to see how the campaign has progressed and found that it has escalated tremendously since my last visit two years ago. In December 2010,  I delivered the “International Statement of Global Concern” from U.S groups to the Broome community and counted and measured flatbacks at EcoBeach near Broome. (More on flatback monitoring here and here.) At that time the frontline campaign was just gearing up.

Today almost daily actions by activists and families in Broome and across Australia to protect Walmadan are turning the tide in favor of sea turtles and songlines. The campaign grew from a foundation built by conservation leaders at Environs Kimberley, Save the Kimberley and The Wilderness Society and individuals including Louise Middleton, Nik Weavers and the Roe family.  Now the Brooome No Gas Community and the Goolarabooloo are engaging hundreds of people in Broome and at the activist and research camps outside of town at Walmadan and Murdudun. As a result,  many of us now believe that the oil companies may ultimately abandon the proposed siting of the Browse Basin Gas Hub at James Price Point near Broome in West Australia.

The fight is not over yet. Last month, California-based Chevron dropped out of the Kimberley natural gas plant project. But 250 appeals  – including ours – to send the flawed environmental review of the LNG plant back to the drawing board were rejected by the state of Western Australia. Even with additional environmental requirements, no level of strict conditions will prevent massive damage to sea turtles, whales, dugongs and Aboriginal cultural sites. See the news story.

During my short but intense visit, I met with Goolarabooloo leader Phillip Roe, who told me: “[W.A. Premier] Barnett can try to paint James Price Point as insignificant, but we know that there are dinosaur footprints, bilbies, turtle nests, whales, songlines, registered sacred sites all here. This is a sacred site worth protecting for all Australians, black or white.”

Phillip Roe is an Aboriginal cultural law boss with responsibilities to protect the traditional lands and heritage of the Goolarabooloo community. He is a leader of the Save the Kimberley campaign at the now well-established Walmadan activist camp outside of town. Phillip’s grandfather Paddy Roe originated the Lurujarri Heritage Trail here two decades ago to help protect sacred sites and native land from encroachment, but also to build bridges between “blackfellas” and “whitefellas.”

Phillip Roe and his brothers Joseph Roe and Richard Hunter — who are also traditional owners and cultural law bosses with the Goolarabooloo people– have galvanized the Broome community and engaged legions of activists, researchers, citizen scientists, artists, filmmakers, musicians and thousands of Facebook friends to intensify the multifaceted campaign to protect the remote Kimberley coast from major oil and gas development northern West Australia.

When I met up with Phillip Roe at Walmadan camp outside of town, he had just returned from Sydney where he participated in high-profile media events and fund-raisers to save the Kimberley organized by retired Australian Greens leader Bob Brown. The camp is strategically sited in a swath of native bushland just below rising sand dunes that lead to the beach and Walmadan.  While remote, hot, and dusty at times, the camp is well equipped with a communications center fueled by solar power – built by volunteers and funded by donations. On Phillip’s arrival in camp, people – many of whom stay for weeks and months on end – emerged from the communications tent, kitchen and surrounding encampments to greet him and share the latest news. A few days later, two of the expert climbers from camp scaled drilling equipment inside the locked Woodside Petroleum compound to hand banners that said: No Gas at JPP.

The banner hang stopped Woodside’s destructive work for the day. It was one of a constant string of direct actions and other grassroots activities occurring almost daily on the front lines of the resistance to the Browse Basin Gas Plant that have slowed, delayed and may soon permanently end land clearing and construction.

The red rock and white sand coast “where the sun goes down” that stretches from Broome to north of Walmadan contains cultural “songlines” important to the Goolarabooloo.  Phillip’s grandfather Paddy Roe originated the Lurujarri Heritage Trail here two decades ago to help protect sacred sites and native land from encroachment, but also to build bridges between blackfellas and whitefellas.  In 2012, more than 65 people were guided along the trail by Phillip’s brother  and Paddy’s grandson Richard Hunter.

The Lurujarri coastline and its waters provides nesting and foraging habitat for marine turtles, calving grounds for humpback whales, and a safe haven for rare endemic snubfin dolphins. The expanse of ocean extending into the Indian Ocean from the Kimberley coast is one of the most pristine and bio-diverse seascapes left on earth.
See video about this year’s Lurujarri Trail walk.
See Goolarabooloo website.

A Haven for Whales, Turtles, Dolphins and Dugongs

The whale count tallied more migrating whales and pairs of cows and calves than ever counted by high-paid Browse gas plant consultants. Each splash of a fin or slap of a whale tail added to the evidence that this corner of the world is essential to the life cycle of the large humpback whale population.

By the last day of the survey, the massive 3-month effort to observe the habitat usage and numbers of humpbacks that pass by James Price Point, the Kimberley Whale Research project “witnessed, recorded and admired” over 3000 whales in this survey, and over 200 calf/cow pairs, from just watching 4 hours per day, said Maddie Goodard in her final post of the season.
See Kimberley Whale Research Facebook Page

Sea Turtles
From the whale observation platform, I spotted a sea turtle swimming in the surf. Many people reported to me seeing sea turtles while they were taking a dip in the turquoise waters after the whale count was finished for the day. Since then, several turtles have recently shown up in Roebuck Bay near Broome fitted with old satellite transmitters.

Last sea turtle nesting season, Philip Roe joined the research team, also directed by Maddie Goodard and Tegan Mossop along with researcher Malcolm Lindsay and community volunteers, to walk the beaches near Walmadan to search for turtle tracks and nests. This was the first time that an organized sea turtle count had ever been organized here. They found more than 14 nests and spotted a hybrid hawksbill returning to the sea.

The oil company consultants had looked for sea turtles here at the wrong time of year and completely missed these nests. They also underestimated the concentration of sea turtles utilizing the offshore waters.

As with the whales, sea turtles are obviously more abundant and more prevalent here than the oil and gas companies claim. Read about the JPP sea turtle monitoring and download the report on this page.

During my visit, I met up with activist extraordinaire and dinosaur tracker Louise Middleton. She and traditional owners have known for years about the giant fossilized footprints of the dinosaurs in the rock below the surf line all around James Price Point. But now they have shined a spotlight on the international significance of the rare imprints to prevent their destruction by Woodside Petroleum and the Browse Basin gas plant.

Louise convinced a major Australian news network to air the story. See story and link. She also made sure that a fascinating article that tells the story of the dinosaur footpoints was rushed to print by Australia’s premier dinosaur journal.Download it here.

Another rarity in the Kimberley or anywhere is the unusual marsupial known as the bilby. I can’t tell you much about it except that the oil companies said there weren’t any at or around James Price Point. But like with most of the flawed science developed for the environmental review, local researchers and citizen science once again proved them wrong. Researcher Malcolm Lindsay set out motion cameras and documented several bilby families making themselves at home. Read more here.

It is impossible to describe the breadth and depth of Kimberley’s unique flora and fauna here. But there are lots of places to learn more and reports out there and new ones being published every day. Just google it!

Appealing the Environmental Approval of the Dirty Gas Plant

Because of the poor environmental science on which the state government of Western Australia has made its case for the Browse Basin Gas Hub, and as part of STRP’s ongoing involvement in the Kimberley campaign over the past three years, I filed an appeal against the environmental approval.

While in Perth, I met with the official charged with reviewing all appeals. Just two days before I met with him, I participated in the first-ever West Australian sea turtle conference.  There researchers presented the results of satellite tracking, tagging and nest monitoring from both recent research and unpublished research from past programs that reinforced the importance of the Kimberley coast to virtually all sea turtle populations and species in Western Australia.  I also presented on the topics of the fossil fuel frenzy and seafood guides. Read more here. Most of this science was never reviewed by the Environmental Protection Authority or downplayed.

While some additional protections were recommended by the appeals convenor in response to my turtle focused comments and from experts on whales, dugongs, dolphins, bilbies, terrestrial species and other environmental and heritage issues, the Minister of the Environment gave the project a thumbs up on October 29, 2012. As mentioned above, the fight will continue, so watch for news, updates and actions here.

Download TIRN’s follow-up letter to the meeting with the Appeals Convenor.

Download the final report on the Appeals from the Minister of the Environment.