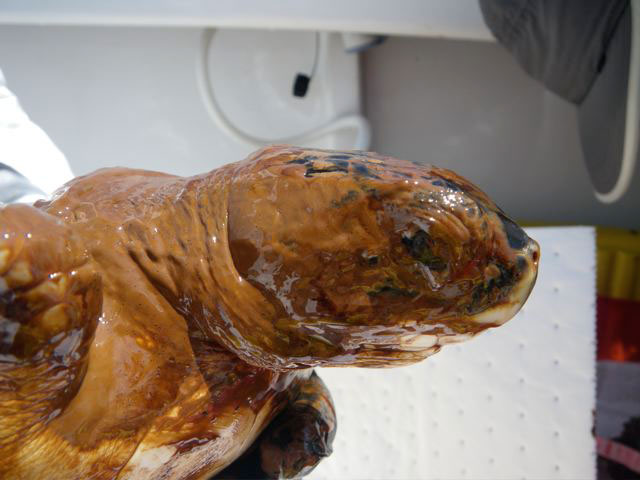 New Orleans – Four years after the BP Deepwater Horizon oil spill, endangered Kemp’s ridley sea turtle recovery has flatlined.  Nesting dropped by 30 percent in 2010 and has not bounced back, according to nesting numbers in Mexico and Texas. See charts at end of release.

“On the four year anniversary of the BP disaster little has been done to protect the world’s most endangered sea turtle – the Kemp’s ridley – from slipping into extinction,” said Carole Allen, the Gulf of Mexico director for Turtle Island Restoration Network in Houston.  “In fact, all federal funding is being cut to zero for Kemp’s ridleys protection after decades of work on Mexico’s beaches and in Texas right when they are most in need.”

Sea turtle advocates attending the 34th Annual Symposium on Sea Turtle Biology and Conservation in New Orleans this week joined Louisiana conservation and community groups in marking the fourth anniversary of the BP oil spill, which is April 20. Sea turtle biologists attending the sea turtle symposium warned of long-term declines of Kemp’s ridleys in the wake of the spill and cumulative threats including shrimp trawling, beach lighting, and water contamination.

No new protections or oil spill damage money has gone directly to protect the Gulf sea turtle species most impacted by the massive oil spill, the endangered Kemp’s ridley, or their beach or marine habitat.  Instead, the US Fish and Wildlife Service recently cut funding for the successful bi-national program that supported protection and monitoring of sea turtle beaches at the nesting beaches in Mexico and in Texas.

The recent Texas oil spill into Galveston Bay released an estimated 170,000 gallons of bunker fuel oil into Gulf waters, closing beaches from Galveston to as far south as Padre Island National Seashore. This spill is delivering another blow to the already endangered Kemp’s ridley sea turtle population that will soon begin to arrive and nest on Texas beaches to lay eggs.

“Here in Galveston we are scrambling to keep sea turtle patrols on the beach and watching for strandings due to the oil spill, shrimp trawl bycatch and sport fishing hooks,” said Joanie Steinhaus, associate campaign director for Turtle Island.

Turtle Island Restoration Network works to mobilize people and communities around the world to protect marine wildlife, the oceans and the inland waterways that sustain them. SeaTurtles.Org 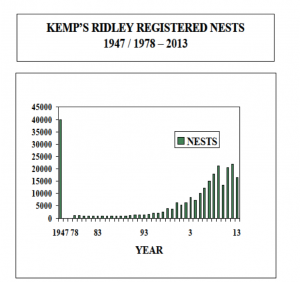 Number of nests recorded during surveys of nesting beaches at Tamaulipas and Veracruz, Mexico (Source: CONANP, Gladys Porter Zoo, and U.S. Fish and Wildlife Service). Notes: The 1947 number was derived from an amateur film by Andres Herrera and is a single reference point representing nesting females on a single day. The total nests over the entire 1947 nesting season is believed to be much higher. Systematic surveys of the Rancho Nuevo nesting beach began in 1966 and were extended to other beaches in 1988.

* Note that some years, the number of eggs and hatchlings released does not include those from a few nests that incubated in situ (at the nest site on the beach) since these numbers are difficult to quantify due to predator disturbance at most of these sites.