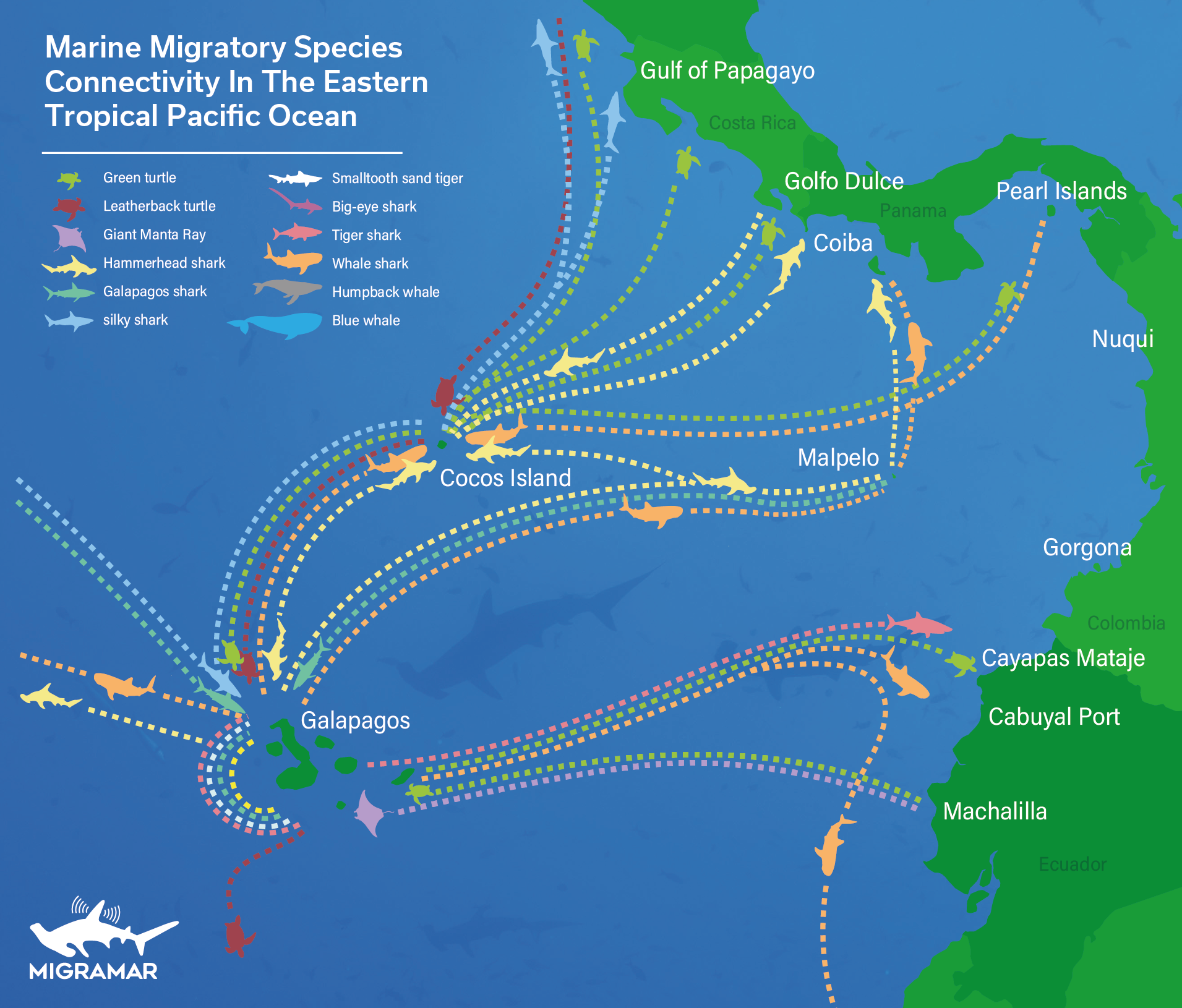 ECUADOR — Environmental groups Mission Blue and Turtle Island Restoration Network called on the Ministers of Environment of Costa Rica and Ecuador today to move forward in creating one of the world’s first marine protected areas connecting the UNESCO biosphere reserves of two countries.

The letter urges that Costa Rica and Ecuador act quickly to create the Cocos-Galapagos Swimway, a 240,000 square-kilometer underwater highway that connects the National Parks of two sovereign nations — Costa Rica’s Cocos Island National Park with Ecuador’s Galapagos Marine Reserve — both of which are UNESCO World Heritage Sites. Scientific research in the Eastern Tropical Pacific conducted by a network of organizations known as MigraMar revealed endangered and threatened marine species like whale sharks, green sea turtles, leatherback sea turtles, silky sharks, and scalloped hammerhead sharks use this swimway to migrate between the marine reserves. When these species leave the protected areas, however, they enter the open ocean where they are at grave risk to industrial fishing.

“It’s important to think like the sharks, the sea turtles and the various forms of life that are not just found in places where we’ve named and claimed territory,” said Dr. Sylvia Earle, Founder of Mission Blue. “We must consider the creatures that occupy this liquid space that we call the ocean and realize that if we were to take action to protect them, it’s not good enough that Cocos and Galapagos have an area of a safe haven around them. What about the space in between? That has to be protected too.”

Cocos Island National Park and the Galapagos Marine Reserve not only share an important percentage of species and ecological characteristics, they also face similar threats. Both marine protected areas have regulations that control how people and commerce can interact with the islands. Despite these restrictions, conservationists face several challenges to protect the species that inhabit them.

A biological justification for the creation of the swimway recently published by MigraMar states about 19% of rays, 34% of sharks, 17% of marine mammals and 27% of marine birds found in these protected areas are threatened or endangered. The document also highlights that Cocos and Galapagos share an important percentage of endemic and island species, as well as pelagic and benthic fauna. Both sites are interconnected by the Cocos seamount ridge that concentrate a significant marine migratory activity.

“The Swimway advances our thinking about how to protect highly endangered migratory species which do not stay put in a single locale like the Galapagos or Cocos marine reserves,” said Todd Steiner, Executive Director of Turtle Island Restoration Network. “By expanding these marine protected areas and actively working with the governments of Costa Rica and Ecuador along with several additional partners to create the first bilateral agreement, we will allow endangered species to migrate safely outside the small marine protected areas and connect two sovereign nation’s marine National Parks, something we hope will be a blueprint that is copied across the globe.”

In May the Swimway was declared a Hope Spot by Mission Blue, highlighting the need for cutting-edge solutions to protect highly migratory species like sea turtles and sharks in the Eastern Tropical Pacific.