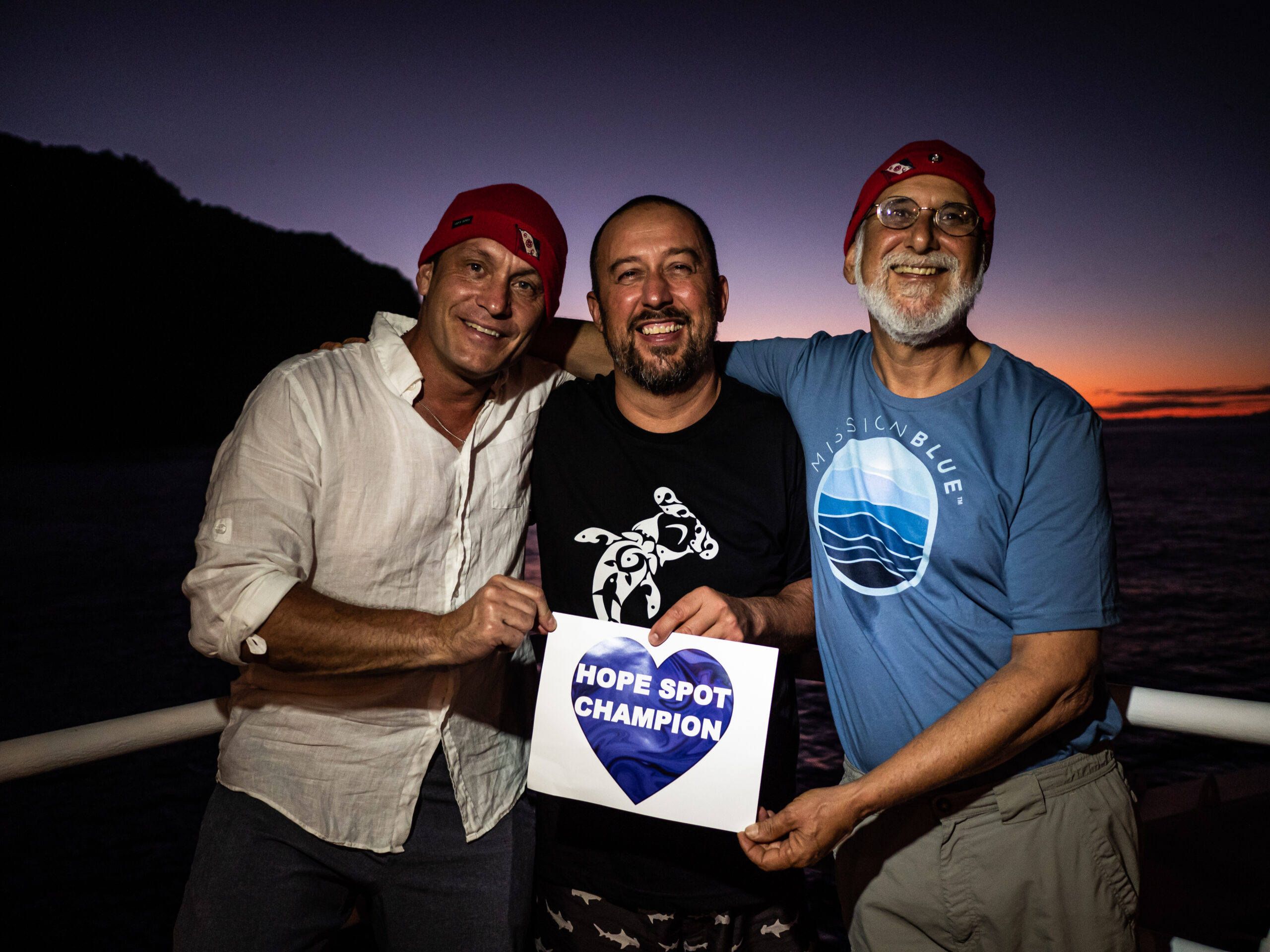 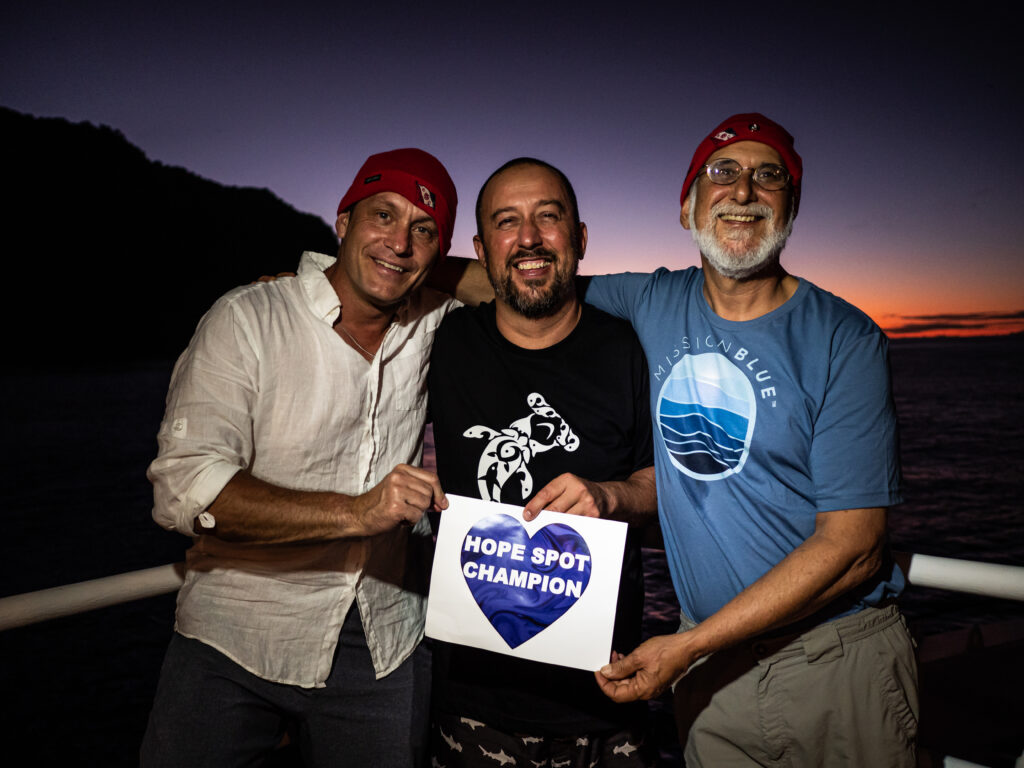 THE EASTERN TROPICAL PACIFIC OCEAN (MAY 12, 2020) – What could become one of the world’s first marine protected area connecting the UNESCO biosphere reserves of two countries has been declared a Mission Blue Hope Spot, highlighting the need for cutting-edge solutions to protect highly migratory species like sea turtles and sharks in the Eastern Tropical Pacific.

Known as the Cocos-Galapagos Swimway, this Hope Spot is a 120,000-kilometer migratory underwater highway that connects the National Parks of two sovereign nations – Costa Rica’s Cocos Island National Park with Ecuador’s Galapagos Marine Reserve – both of which are UNESCO World Heritage Sites.

Dr. Sylvia Earle, Founder of Mission Blue, says, “I had an opportunity to meet sharks in the Galapagos in 1966. I thought I had found the sharkiest place on the planet: hammerheads, Galapagos sharks and silkies – it’s this magical place that clearly was important not just for sharks, but for a rich diversity of life. In 1972, I had an opportunity to visit Cocos Island. In between those islands, there’s a lot of water. We know now that the sharks travel not just between Cocos and Galapagos, but all over. They find food all over the ocean in which they travel. It’s important to think like the sharks, the sea turtles and the various forms of life that are not just found in places where we’ve named and claimed territory. We must consider the creatures that occupy this liquid space that we call the ocean and realize that if we were to take action to protect them, it’s not good enough that Cocos and Galapagos have an area of a safe haven around them. What about the space in between? That has to be protected too. That’s the underlining rationale.”

MigraMar, a network of groups conducting scientific research to better understand and safeguard marine migratory species in the Eastern Tropical Pacific, revealed endangered and threatened marine species like whale sharks (Rhincodon typus), green sea turtles (Chelonia mydas), silky sharks (Carcharhinus falciformis), and scalloped hammerhead sharks (Sphyrna lewini), use this swimway to migrate between the marine reserves. When these species leave the protected areas, however, they enter the open ocean where they are at grave risk to industrial fishing.

“This is a very important step to protect the migratory route of sharks, sea turtles and other species in an area that connects two emblematic national parks, declared as World Heritage Sites,” said Carlos Manuel Rodríguez, Minister of Environment and Energy of Costa Rica. “This is history-making and a new era of protecting our ocean wildlife.”

“This advances our thinking about how to protect highly endangered migratory species which do not stay put in a single locale like the Galapagos or Cocos marine reserves,” said Todd Steiner, executive director of Turtle Island Restoration Network, a global ocean conservation nonprofit that is part of MigraMar who nominated the Swimway as a Hope Spot. “By expanding these marine protected areas and actively working with the governments of Costa Rica and Ecuador along with several additional partners to create the first bilateral agreement, we will allow endangered species to migrate safely outside the small marine protected areas and connect two sovereign nation’s marine National Parks, something we hope will be a blueprint that is copied across the globe.”

Cocos Island and the Galapagos Islands have regulations that control how people and commerce can interact with the islands. Despite these restrictions, conservationists face several challenges in protecting Cocos Island National Park and the Galapagos Marine Reserve. The area’s abundance of fish and other wildlife lead to frequent Illegal, Unreported, and Unregulated (IUU) fishing, also known as poaching, and is considered one of the largest threats to these protected areas. This poaching also harms other species like dolphins and sea turtles via bycatch. A lack of funding has hindered protection efforts, and the Cocos Island marine protected area is too large and too remote for the Costa Rican Coast Guard to patrol all the time. Similarly, the Galapagos Marine Reserve covers an area of about 80,000 square miles and is also very difficult to patrol effectively. There’s been pushback from the fishing community surrounding enforcing and increasing these areas.

“Protecting Galapagos’ highly migratory species such as sea turtles and sharks through the creation of the Cocos-Galapagos Swimway is critical to maintaining the ecological balance of our marine environment — and protecting the marine environment is critical to protecting the livelihoods of so many of our people who rely on the bounty of the sea and the dollars provided by the hundreds of thousands of eco-tourists who come here each year,” said Norman Wray, president of the Galápagos Governing Council.

The Mission Blue team went to Cocos Island twice in 2015 and again in 2017 for a special expedition focused on finding and tagging sharks. Led by Dr. Sylvia Earle, Mission Blue founder and Kip Evans, Director of Expeditions and Photography, Mission Blue worked closely with scientists, including partner MigraMar, to learn more about the movement and conservation status of migratory sharks.

“Protecting oceanic hotspots like Cocos Island National Park is only a first step in securing its future,” said Laura Chinchilla Miranda, former president of Costa Rica. “We need to move beyond this and protect the ocean superhighways used by endangered highly migratory species such as the scalloped hammerhead, the most iconic species of Cocos Island. Costa Rica earned its international reputation in the 1970s through the creation of its National Park System and now has the opportunity to take the lead with Ecuador to be at the cutting-edge of oceanic governance by creating the Cocos-Galapagos Swimway, and give these endangered species a fighting chance at survival and recovery.”

“The swimways are a necessary bridge for regional collaboration, to ensure the protection and sustainable management of our rich marine ecosystems, in order to tackle over exploitation and the growing threat of climate change. Connectivity is key, both scientifically and politically, in order to bridge the gap between science and policy,” said Zdenka Piskulich of PACIFICO. “The Cocos–Galapagos Swimway is an important example of how science can drive a process to ensure that the governments can adopt informed decisions to protect these important migratory routes.”

“The Cocos-Galapagos Swimway is a vital artery in the network of biodiversity hotspots that we are fortunate enough to share here in the Eastern Pacific,” said Dr. Alex Hearn, founder of MigraMar and professor at University of San Francisco in Quito, Ecuador. “Over the years, we have tracked hammerhead sharks, green turtles, whale sharks and hawksbill turtles along this submarine mountain chain that links two of the most stunning marine reserves on this planet. Becoming a Hope Spot and bringing the swimway to the attention of the global community is a big step towards supporting the governments of Ecuador and Costa Rica in developing meaningful protection for these endangered migratory species as they move through the ocean.”

“The creation of a Cocos-Galapagos Swimway is an outstanding opportunity for Costa Rica and Ecuador to further strengthen their ties by protecting a unique ecosystem in the world,” said Yolanda Kakabadse, Ecuadorian conservationist and former president of World Wildlife Fund International. “Although challenges will certainly arise, they fall short next to the opportunity of ensuring a healthy ocean for our future generations.”