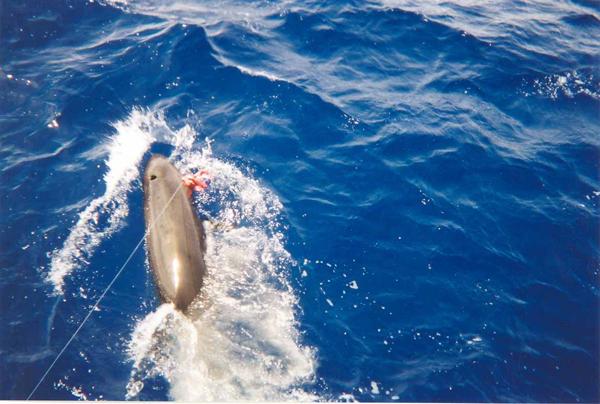 The agency published a notice in the Federal Register on January 19, 2010 that formally establishes a “take reduction team” for false killer whales. The team will consider ways to reduce harm to false killer whales caused by commercial tuna and swordfish longline operations. Longline vessels trail up to 60 miles of fishing line suspended in the water with floats and as many as 1,000 baited hooks. Approximately 60 whales were killed or injured in 2009 by the Hawaii longline fleet fishing for tuna and swordfish.

Creation of the team was the goal of the most recent litigation filed by Earthjustice on behalf of Turtle Island Restoration Network, Hui Mälama i Koholä, and the Center for Biological Diversity.

Recent data shows the false killer whales living in waters surrounding the main Hawaiian Islands represent a very rare subspecies that numbers fewer than 120 individuals. The Fisheries Service is currently conducting a 12-month study to determine if these “insular” false killer whales warrant protection under the federal Endangered Species Act, due to threats from, among other things, longline fishing.

The total number of false killer whales in Hawaiian waters, including both the insular population and a “pelagic” population that also interacts with longlines, is estimated at only about 600.

Based on observer data, the Fisheries Service estimates that, each year, the Hawaii-based longline fishery kills or seriously injures at least seven false killer whales.

“The Fisheries Service’s own data show that Hawaii’s false killer whales are getting hooked and entangled in longlines at rates nearly three times what the agency has determined the population can sustain,” Cummings said.

“As a commercial fisherman myself, I’m confident we can find ways to fish sustainably and responsibly,” Ailä said. “As a Hawaiian cultural practitioner, serving on the TRT helps fulfill my kuleana (responsibility) to mälama (to care for) Hawaii’s false killer whales.”

“Under the Marine Mammal Protection Act, NMFS is charged with protecting Hawaii’s false killer whales,” Henkin said. “It took a lawsuit to prod them to act, but I’m glad they’re now taking their responsibility seriously.”

The action culminates seven years of efforts by Hui Mälama i Koholä, the Center for Biological Diversity, Turtle Island Restoration Network, and Earthjustice to compel the Fisheries Service to comply with its legal duties.

The coalition first filed suit in 2003 to force the Service to classify the Hawaii longline fishery as a “Category I” fishery due to its unsustainable “take” of false killer whales. The Fisheries Service made the classification in 2004, but failed to follow up on the listing with a take reduction team. That failure prompted the conservation groups to file suit again in 2009.

“In response to our latest lawsuit, the Fisheries Service finally asked Congress for the money it needed to form the TRT,” said Turtle Island Restoration Network executive director Todd Steiner. “We’re gratified that serious discussions aimed at protecting the whales from unsustainable drowning and hooking will finally begin.”

False killer whales are large-toothed whales that resemble killer whales (orcas). According to a December 2008 study by the federal Government Accountability Office, they are “the only marine mammal for which incidental take by commercial fisheries is known to be above its maximum removal level that is not covered by a take-reduction team.”

Photos of Hawai’i’s false killer whales in the water are available at:
http://www.earthjustice.org/library/background/higher-resolution-photos-of-false-killer-whales.html

Photos of false killer whales being harmed by Hawaii’s longline fleet are available at:
http://www.earthjustice.org/news/press/2009/fisheries-agency-releases-pictures-of-false-killer-whales-harmed-by-longline-fishery.html

Hui Mälama i Koholä is a Hawai‘i unincorporated association whose members consist of fishermen, Hawaiian cultural practitioners, and others from across the state of Hawai‘i who share a common goal: the protection of koholä (whales) and other marine life. The organization seeks to promote sound management of ocean resources, with an emphasis on utilizing the precautionary approach to ensure that, seven generations from now, there will be healthy populations of koholä and other marine species for our keiki (children) to observe and to mälama (care for).

The Center for Biological Diversity is a national, nonprofit conservation organization with more than 255,000 members and online activists dedicated to the protection of endangered species and wild places. For more information, visit www.biologicaldiversity.org

Turtle Island Restoration Network is a nonprofit environmental organization committed to the study, protection, enhancement, conservation, and preservation of the marine environment and the wildlife that lives within it. TIRN has approximately 10,000 members, many of whom reside in the state of Hawai‘i, and has offices in the United States, Costa Rica, and Papua New Guinea. For more information, visit www.seaturtles.org