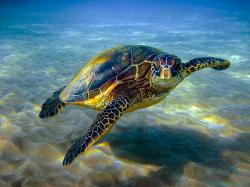 The Associated Press published this story on Thursday, August 2, 2012.

HONOLULU (AP) — Federal wildlife agencies plan to study whether they should reclassify Hawaii’s green sea turtles as a distinct population and whether the turtles might have recovered to the point where they no longer need protections provided by the Endangered Species Act.

The National Marine Fisheries Service said Wednesday a petition submitted by the Association of Hawaiian Civic Clubs in February prompted the review.

Known as honu in Hawaii, green sea turtles are found in tropical and subtropical waters around the world. They nest on beaches in 80 countries.

Since 1978, the U.S. government has listed those that breed in Florida and Mexico’s Pacific coast as endangered. It designated all others as threatened.

The last review of the animals, done in 2007, found Hawaii’s green sea turtle population has been growing at an annual rate of 5.7 percent for the last three decades.

Patrick Opay, endangered species branch chief at the fisheries service’s Pacific Islands regional office, said officials already had information indicating they should get ready to evaluate the population’s status, but the petition brought the issue to the forefront.

“This is nudging us to consider it more,” Opay said.

The fisheries service will review the issue together with the U.S. Fish and Wildlife Service.

The law requires the agencies to say by February whether the status quo should be maintained or changes should be made. If the agencies propose changes, they’ll hold public hearings and accept public comment.

Environmentalists with the group SeaTurtles.org said the honu population hasn’t recovered to the point where Endangered Species Act protections can be safely lifted. They also argue taking the turtles off the threatened list make them available for hunting.

“A major factor in the survival of the honu is the serious impact climate change and rising sea levels will have on the nesting beaches and sea turtle life cycles in decades to come,” said Teri Shore, the organization’s program director.

A resolution passed by the Association of Hawaiian Civic Clubs said the Native Hawaiian community has asked for the traditional harvesting of honu to resume. Its petition noted kapu prohibitions prevented most people from eating turtle meat until the kapu system was abolished in the early 1800s.

The association’s president, Soulee Stroud, said creating a way for people to hunt the turtles wasn’t the primary motivation for submitting the petition. He said delisting Hawaii’s turtles would allow more people in Hawaii to take more of an active role in taking care of honu.

“Delisting doesn’t mean removal of protection. It returns the control and management from the federal government to the state, but more importantly to the citizens of the state of Hawaii and Hawaiian practitioners — those that are knowledgeable of the ocean, the cycles of the ecosystem,” he said.