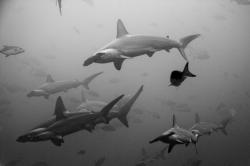 Final Push to Ban Shark Fins in California, Victory is Near!

I was thrilled to learn of the latest victory in the campaign to halt the cruel practice of shark finning.  As an intern with the Sea Turtle Restoration Project of the Turtle Island Restoration Network, one of my assignments has been to work to support AB 376, which bans the sale, purchase or possession of shark fins in the state of California. Yesterday, it passed the Senate floor on a bipartisan 25-9 vote, and now goes to the Governor Jerry Brown’s office for a signature.  Brown has 12 days from the time it reaches his desk to sign or veto the measure. Since he has not indicated publicly whether he intends to sign the bill or not, I am now focusing my efforts on outreach to his office and encouraging our members to join me.

Click here to take action now and send an email to Governor Jerry Brown urging him to sign AB 376 into law!

STRP members sent 817 email messages and made countless phone calls directly to their Senators in support of AB 376. In our office we made many phone calls to Sacramento and sent a hand-written letter to our Senator via overnight mail last week prior to the final vote. It is always encouraging to see this hard work pay off.

The AB 376 bill was supported by many ocean conservation groups, including the Sea Turtle Restoration Project, as a way to help end the cruel practice of shark finning, which is largely the cause of the drastic decline of shark populations worldwide.  AB 376 supporters, including actors Leonardo DiCaprio and Bo Derek, emphasize that our ocean’s apex predators play a crucial role in the health of our ecosystems and are thus, important to conserve and protect. Time Magazine describes the practice of shark finning to be “wasteful, cruel and, most significantly unsustainable for the ocean ecosystems as it threatens to deplete the numbers of these top predators and spoils the natural balance of the seas.   According to The Washington Post, activists have begun pushing for shark fin bans across the U.S. in an effort to combat the global shark fin trade, which scientists estimate kills between 26 million and 73 million sharks each year.

Many of those that opposed the bill claimed that it is an attack on Asian culture and cuisine, as shark fins are the key ingredient for shark fin soup, a Chinese delicacy. But, when one of China’s most famous celebrities, Yao Ming, is also in support of banning shark finning and ending the cultural use of shark fin soup, it is clear that not all Chinese are heartless shark-killers.

There were several key provisions added to the bill during its evolution in Sacramento this summer, including an exemption allowing taxidermists to possess shark fins and letting licensed fishermen donate shark fins to research institutions.  Also, a companion bill was introduced and passed that allows for a longer grace period until July 2013 for retailers to sell in-stock shark fins and requires the California Ocean Protection Council to submit a yearly report on any sustainable shark fisheries operating.

California, home to approximately 1.1 million Chinese-Americans, is one of the largest importers of shark fins outside Asia.  As quoted in Reuters, state Senator Christine Kehoe, a San Diego Democrat who was one of the bill’s chief proponents, said, “(This bill) addresses an important environmental threat to our oceans’ health.  It’s our market here that drives the slaughter.”  She further cited in The Huffington Post estimates that 85 percent of dried shark fin imports to the United States come through California, giving the bill an impact beyond efforts to restrict the practice in the U.S. and abroad.  This is why I am especially excited that the state may soon join Washington, Oregon and Hawaii by passing this ban on shark fins.  Passing this strict law banning the possession of shark fins, will put an end to the legal shark fin trade in California.  Hopefully we can use California as an example to ban shark finning in international waters.  In January, President Obama signed federal legislation tightening an 11-year-old ban on shark finning in U.S. waters. While that law prohibits finning, it does not prohibit the possession and sale of shark fins, like the new California law would.

This shark fin ban is representative of the passion and collaboration of diverse individuals that can come together around a unified goal.  Unwavering determination and grassroots outreach by organizations such as ours and the local non-profit Sea Stewards helped gain momentum and enormous support of those who wanted to put an end to the inhumane practice of shark finning.  We can now celebrate another victory for sharks and a victory for everyone who helped make this ban come to life. Just one more signature is needed from Governor Brown before the true celebration begins!