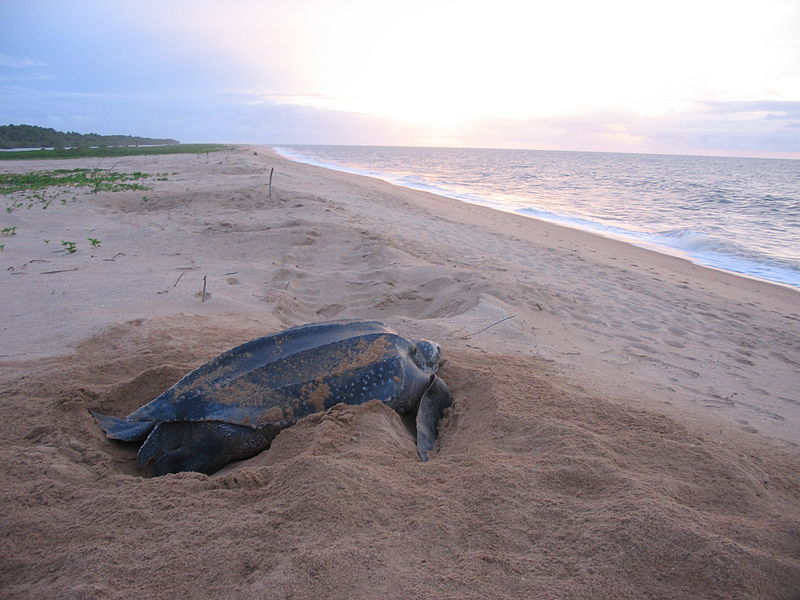 August 27, 2004- A giant Pacific leatherback was seen six miles off the coast of Bolinas (Marin County) on a whale watching tour sponsored by the San Francisco Bay Whale Watching, out of Sausalito.

It was feeding on a stinging jellyfish of the genus Chrysaora, known commonly as a sea nettle

Biologist and naturalist leader, David Wimpfheimer, commented, “This is the largest leatherback I have ever seen. It is great to know that a couple of the giants are still surviving.” He noted that over the past ten years, he has seen less and less of them during his naturalist and research expeditions off the coast.

One of the passengers, Thomas Literal of Colorado, captured some beautiful digital stills of the animal, including the giant feeding on large brown jellyfish. He estimated the turtle’s length between 6 and 7 feet from head to tip of shell and was 4 feet across. Based on tail length, it was a male.

In the past, leatherbacks were seen much more commonly in the Pacific off the Bay Area, where they come to feed on jellyfish, their primary food source. Today, Pacific leatherbacks are on the verge of extinction, with populations plummeting in the past 15 years by 90 percent or more. Today, only about 1,000 females nest per year throughout the Pacific. In Mexico, populations have declined 20% per year for nearly a decade. Scientists are predicting that two populations, in Costa Rica and Malaysia, will go extinct in the next 10-30 years. Only one moderate-sized Pacific leatherback rookery remains, in Indonesia, where nesters have declined five-fold over the past half-century to about 600 per year.

The leatherback sea turtle is a species best described by superlatives. It is the largest sea turtle: a male leatherback found on the coast of Wales was 9-1/2 feet long and weighed almost 2,000 pounds. The leatherback is the only sea turtle without a shell. Its outer protection is a leathery, scaleless skin made of tough, oil-saturated tissue raised into seven prominent ridges. It dives deeper and swims into colder waters that any other sea turtle. They have been known to dive down to 4,922 feet.

“Leatherback turtles are among nature’s most graceful and amazing creatures, surviving the age of the dinosaurs. If we don’t change industrial fishing practices, we may be the last generation to see this magnificent species that has survived for the past 100 millions years,” said Todd Steiner, director of the Sea Turtle Restoration Project based in Marin County, CA.

Coincidentally, the Sea Turtle Restoration Project ( http://www.seaturtles.org ) was premiering its new documentary “Last Journey for the Leatherback” on August 31, 2004 in conjunction with the California Academy of Sciences.

“The timing of the call I got today from my old friend David Wimpheimer is another coincidence that is hard to believe, but it must happen for a reason,” said Steiner. “We are doing everything we can to keep this species from checking out, and these twists of fate keep us going, even in the face of nearly overwhelming odds to reform international fisheries.”