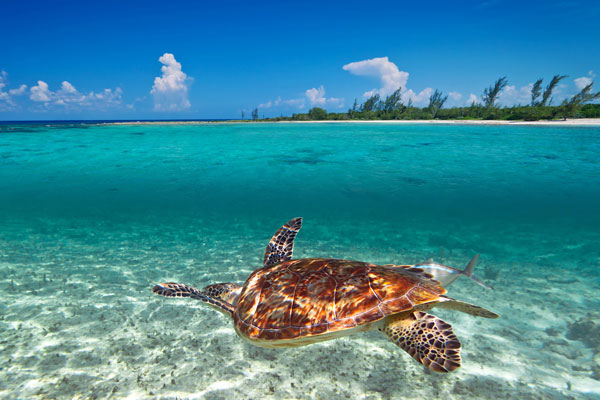 Often when we think about sea turtles being killed as a result of getting caught by fishing nets, we only think about these animals drowning.

After all, sea turtles breathe air like we do and when they are held beneath the water too long, they struggle for breath and drown. These drownings are the benchmark numbers that are reported by fisheries agencies and help guide decisions about whether to close down a particular fishery because of its impact.

But the total mortality of sea turtles caught in nets is not limited to those animals that drown in the nets.

A recent scientific paper highlights that sea turtles will often die even after being released from the nets.

A juvenile female green sea turtle (Chelonia mydas) was found entangled in a large mesh gillnet in Pamlico Sound, NC, and was weak upon presentation for treatment. Blood gas analysis revealed severe metabolic acidosis and hyperlactatemia. Plasma biochemistry analysis showed elevated aspartate aminotransferase and creatine kinase, marked hypercalcemia, hyperphosphatemia, and hyperkalemia. Death occurred within 24 hours of presentation despite treatment with intravenous and subcutaneous fluids and sodium bicarbonate. Necropsy revealed multifocal to diffuse pallor of the superficial and deep pectoral muscles. Mild, multifocal, and acute myofiber necrosis was identified by histopathological examination. While histological changes in the examined muscle were modest, the acid-base, mineral, and electrolyte abnormalities were sufficiently severe to contribute to this animal’s mortality. Exertional myopathy in reptiles has not been well characterized. Sea turtle mortality resulting from forced submergence has been attributed to blood gas derangements and seawater aspiration; however, exertional myopathy may also be an important contributing factor. If possible, sea turtles subjected to incidental capture and entanglement that exhibit weakness or dull mentation should be clinically evaluated prior to release to minimize the risk of delayed mortality. Treatment with appropriate fluid therapy and supportive care may mitigate the effects of exertional myopathy in some cases.

Sea turtles can die even after being released from fishing nets. To reduce sea turtle mortality, we need to ensure that sea turtles are not being caught in fishing nets in the first place.

This recent report underscores the case for marine protected areas, and the importance of phasing out fishing methods, such as driftnets or shrimp trawls, that entangle sea turtles even if they are released alive.