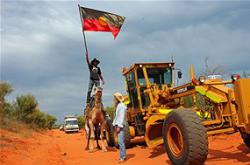 Photo: An environmental protestor waves an Aboriginal flag atop a camel next to a grader that has been blockaded from reaching James Price Point. (ABC Local: Ben Collins)

Protesters have blockaded the road to a controversial gas hub site in Western Australia’s Kimberley.

About 25 people gathered on a dirt track north of Broome to stop Woodside contractors from accessing the site at James Price Point.

They set up banners early this morning and one protester called Shaun chained himself to a bulldozer.

He agreed to free himself in exchange for seeing a document giving Woodside permission to clear the land.

Another man has since chained himself to the bulldozer and protester Dave Mann says they are holding their ground.

“We don’t want to see them do their business so we’re here to make it difficult for them,” he said.

Inspector Geoff Stewart says while the police respect the protesters’ right to have their say, it is illegal to block traffic.

“Certainly people can’t impede the vehicles, even by standing or by vehicles, and we’re just negotiating with them to move,” he said.

A convoy, including the bulldozer, several cars and a truck, was prevented from accessing the site.

Organiser Will Thomas says even though the police will try to move them on, the protesters will not let the Woodside convoy through today.

The blockades come as the Australian Heritage Council officially recommends 20 million hectares of the West Kimberley be declared a national heritage site.

In its final report to the Government, the Australian Heritage Council has expanded the recommended boundary to include the gas hub site.

The Wilderness Society’s Peter Robertson says the new report contradicts the State Government’s claims that the area is not significant.

“The Government’s proposal pretty much dismissed the significance of the dinosaur footprints, especially in the James Price Point area,” he said.

“This report and these recommendations contradict that dismissive appraisal and it will definitely force the federal minister to focus his mind much more clearly on the significance of that coastal environment.”

Mr Robertson says the inclusion of the site will create problems for supporters of the development.

In a statement, Woodside said the site was preferred over others because the WA Environmental Protection Authority recommended that heritage and environment issues at James Price Point could be managed.

It also said that any sites of heritage value at the precinct will be managed in accordance with the conditions of the environmental and heritage approvals the project requires to proceed.